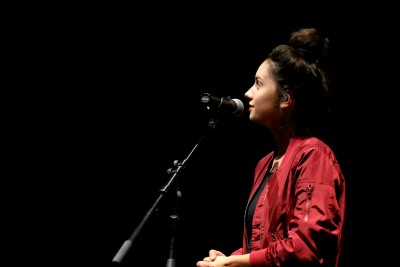 Originally from Albuquerque, New Mexico, Olivia Gatwood has received national recognition for her poetry, writing workshops, and work as a Title IX Compliant educator in sexual assault prevention and recovery. As a finalist at Brave New Voices, Women of the World and the National Poetry Slam, Olivia is an active member of the slam poetry community and has been featured on HBO, Verses & Flow, Button Poetry and Huffington Post, among others. Olivia has traveled nationally to perform and teach workshops on gender equality, sexuality, and social justice at over 70 colleges and 30 high schools nationwide. Her Amazon Best Selling collection, New American Best Friend, reflects her experiences growing up in both New Mexico and Trinidad, navigating girlhood, puberty, relationships, and period underwear.

Olivia is a former member and co-founder of SPEAK LIKE A GIRL and was an Artist in Residence at the Chatham School for girls, alongside celebrated leaders such as Venus Williams and Gloria Steinem. Online, her videos, including Manic Pixie Dream Girl and Ode to My Bitch Face have gained over 3 million views collectively.

Olivia believes in girl-power. She currently lives in Boston.

Joaquina Mertz is a singer/songwriter from Mexico City. Growing up, she started her studies as a classical singer, and attended Interlochen Center of The Arts. She attended and graduated from Berklee College of Music, where she got to expand her love for Latin American sounds, as well as discovering her love for traditional Mexican folk songs. Joaquina recently sold out shows in Mexico, including the Festival Internacional Cervantino and her debut in Mexico, performing her EP Honey. Honey is a three piece EP that ventures into styles like neo-soul and R&B