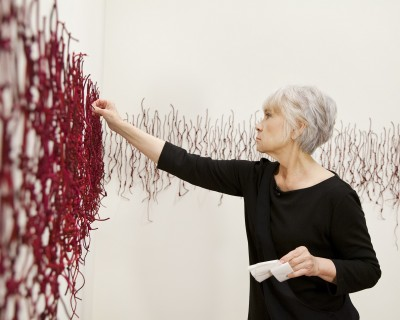 New York State's second largest city will receive unique added depth and energy to its social, economic and cultural profile at the end of 2020 with the opening of K Art, 808 Main St., Buffalo. K Art will be the first and only Native-owned art gallery of its kind in the United States to solely showcase the artwork of national-level Native contemporary artists. The vision of Founder and Owner Dave Kimelberg, a Seneca Nation of Indians (Bear Clan) member, attorney and accomplished entrepreneur, K Art will be a pioneer in the art community to enable important discussions on Native American underrepresentation, marginalization, stereotypes, history and contemporary culture. The gallery's inaugural exhibition will open Friday, December 4.

Curated by Art Director Brooke Leboeuf, K Art's rotating exhibitions will feature solo and group exhibitions within the gallery's 2,000 square feet. K Art's inaugural exhibition will be a survey of the work of national Native contemporary artists. Confirmed participants are as follows. Further information on the exhibition is still to be announced.

* Gina Adams: A hybrid artist who specializes in cross-media studio work, including the reuse of antique quilts and broken treaties between the United States and Native American tribes, sculpture, ceramics, painting, printmaking and drawing, Adams is a descendant of both Indigenous (Ojibwe) and colonial Americans. Fascinated by storytelling, particularly stories passed down, Adams explores where the land, peoples and stories come together and has participated in solo and group exhibitions across the world. The recipient of several noteworthy awards and fellowships, she earned a Bachelor of Fine Arts from the Maine College of Art and a Master of Fine Arts from the University of Kansas.

* Jay Carrier (Onondaga/Tuscarora Nations - Wolf Clan): A mixed media artist, painter and sculptor, Carrier depicts landscapes both in the traditional and interior senses and has exhibited in many solo and group exhibitions across North America. Carrier received a Bachelor of Fine Arts degree from the University of Illinois-Champaign, studied painting at The College of Santa Fe, New Mexico and participated in the Master of Fine Arts program at the University of Illinois.

* Lewis deSoto (Cahuilla Nation): A multimedia artist using mediums including photography, sculpture and installations combining sound, light, video and space, deSoto's work explores the nuances of various social histories. Holding a Master of Fine Arts from Claremont Graduate School and a Bachelor of Arts in Studio Art from the University of California, Riverside, deSoto has exhibited across the world and is a professor of photography at San Francisco State University.

* Jeffrey Gibson (Mississippi Choctaw-Cherokee): A sculptor and painter, Gibson is known for creative works that reference a unique combination of cultural perspectives and transform Western and non-Western references. He earned a Bachelor of Fine Arts from the Art Institute of Chicago and a Master of Fine Arts from the Royal College of Art. Gibson has exhibited in hundreds of national solo and group exhibitions and is the recipient of several distinguished awards and grants, including the 2014 Art Matters Grant and more.

* Peter Jemison (Seneca Nation of Indians - Heron Clan): A classically trained painter, Jemison is known for his award winning paintings, prints, drawings and films, which embody the belief that every living thing and every part of creation contains a spiritual force. Having participated in group and solo exhibitions in the United States, United Kingdom and Germany, Jemison is a leading authority on Haudenosaunee history and holds a Bachelor of Science degree in Arts Education and an Honorary Doctorate from Buffalo State College. He received his academic arts education from the University of Siena in Italy.

* Brad Kahlhamer: A multi-media artist with range from sculpture and painting to performance and music, Kahlhamer explores notions of authenticity and representation within Native American art discourse. A successful exhibitioner, Kahlhamer's works have appeared in several solo and group exhibitions across the world and his art has been collected by major museums including the Museum of Modern Art, the Whitney Museum of American Art, the Metropolitan Museum of Art and more. He attended the University of Wisconsin - Fond du Lac and Oshkosh and received a Bachelor of Fine Arts.

* Meryl McMaster (Siksika Nation): A predominantly photography based Canadian artist, McMaster incorporates the production of props, sculptural garments and performance to form a synergy that transports the viewer out of the ordinary and into a space of contemplation and introspection. With several solo and group exhibitions throughout Canada, the United States and the United Kingdom, McMaster has received several major awards and fellowships and her work has been acquired by various public collections. She attended the Ontario College of Art and Design University.

* Duane Slick (Meskwaki - Fox and Ho-Chunk): An artist and educator known for his monochromatic paintings, Slick's work is represented in galleries, public collections and exhibitions across the United States. Slick teaches fine arts at the Rhode Island School of Design and has received several honors and awards throughout his career, including the Eiteljorg Fellowship for Native American Fine Art. He received a Bachelor of Fine Arts in Painting and a Bachelor of Arts in Art Education from the University of Northern Iowa and holds a Master of Fine Arts in Painting from the University of California, Davis.

* Marie Watt (Seneca Nation - Turtle Clan): A contemporary artist with specialties in textile arts, installations and printmaking, Watt uses powerful symbolism to synthesize Native American mythologies and history interwoven with current issues. A Bonnie Bronson Award and Betty Bowen Award winner with several other noteworthy distinctions who has participated in hundreds of solo and group exhibitions across the United States, Watt holds a Associate of Fine Arts from the Institute of American Indian Arts, a Bachelor of Science from Willamette University and a Master of Fine Arts in Painting and Printmaking from Yale University.

An integral element of the K Haus, a design, art and tech-centric space, K Art will reside in the middle of Buffalo's Allentown historic district. The neighborhood is remarkable for its lively community of artists, lifestyle venues, parks and proximity to national art galleries, and its inclusion in the National Register of Historic Places.

K Art's owner and founder, Dave Kimelberg, was the founding chief executive officer of Seneca Holdings, the economic development arm of the Seneca Nation, which he led from a start-up concept to a multi-national corporate and investment enterprise. He is the founding partner of the only Native-owned law firm focused on venture capital and high-technology start-ups, led the creation of one of the only FM commercial radio stations located on Native territory and brought broadband internet connectivity to rural Seneca territory. Kimelberg has authored numerous pieces regarding Native American economic and political issues.

Having previously managed two privately-held collections and worked as a project coordinator at the Albright-Knox Gallery, K Art's Art Director Brooke Leboeuf will lead the curation of artists and their works for the gallery's ongoing rotating exhibitions. She also previously served as the visual arts curator for Buffalo Arts Studio and was an arts consultant for Buffalo-based multi-national Rich Products Corporation. Leboeuf graduated with her Master of Arts in Art History from the University of Buffalo, her Bachelor of Arts in Art History from Hobart and William Smith Colleges.