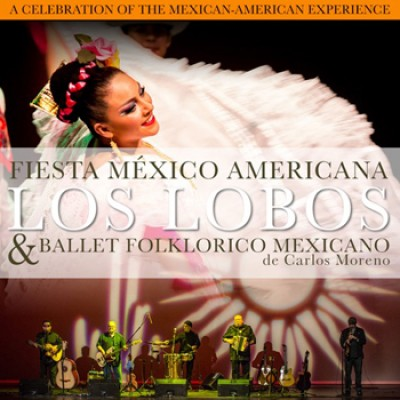 Los Lobos is going back to its roots with a special performance with the iconic dance troupe Ballet Folklorico Mexicano de Carlos Moreno.  Los Lobos integrates live performances of both traditional Mexican folk songs and selections from their repertoire with the vibrant performers of the BFM. They seamlessly share the stage, presenting popular traditional folk pieces from the regions of Guerrero, Veracruz, Tamaulipas and Chihuahua. Each ensemble also individually performs its own artistic creations which have evolved from their Mexican-American experience. Both groups will demonstrate their dedication and commitment to exploring and honoring Mexican Folklore.

Says Steve Berlin: "The tour came to be because of the herculean effort by Carlos Moreno and (performing arts agent) Eric Amada to make it happen. BFM evidently had been dancing to a few of the songs from our album 'La Pistola y El Corazon' and it was they who came up with the idea of integrating the dance troupe into an evening of us playing and them dancing to both our music  and some folkloric numbers we had been playing for many years. It makes for a very edifying and entertaining night."

The band is embarking on this ambitious series of dates hot on the heels of the release of their all-new full length studio album, "Gates of Gold," which was released by 429 Records to rave reviews. In addition, a new biography of the band, "Los Lobos—Dream in Blue" written by Chris Morris was released by the University of Texas Press.

Los Lobos are entering their fifth decade, as the humblest of musical icons, having racked up countless accolades for their uncompromising artistry.  With four Grammys in hand and the respect and admiration of their musical peers, the band still hearken back to their beginnings as "the soundtrack of the barrio" and remain a cultural touchstone for a community.

Founded in 1967 by Carlos Moreno Samaniego, the BFM has achieved recognition both in the United States and in Mexico. In 1980, the Mexican consulate in San Francisco named the company the official ambassador for ongoing cultural activities with Mexico. It has held that distinction for over thirty years. Their mission is to empower the community and to educate the general public by providing a greater understanding and appreciation for Mexican culture and folklore.