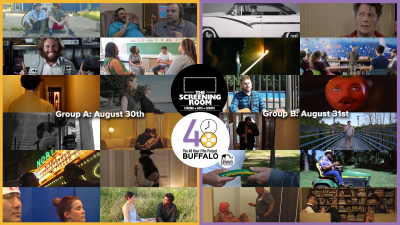 The Encore Screenings of the 24 films made for the 2018 Buffalo 48 Hour Film Project will be held August 30-31, 2018 at the Screening Room Cinema Cafe at the Boulevard Mall. Moviegoers can enjoy a drink at this comfortable theatre and watch a wide variety of films written, shot, and edited in just 48 hours as well as meet some of the filmmakers who made them.

24 teams of local filmmakers had just 48 hours to create a 4-7 minute long short film during the filmmaking weekend that took place August 10-12. The 48 Hour Film Project is a global filmmaking event held in 130+ cities around the world. The winning films from each city will move on to have their films shown at the Filmapalooza Film Festival in Orlando, Florida where they will compete against each other for more awards and the opportunity to screen at the prestigious Festival de Cannes in France.

The Encore Screenings will also include the revealing of the 2018 award nominees as well as the list of the Top 10 films from this years 48 Hour Film Project. The first half will be announced on August 30 and the other half on August 31.

Come support the filmmakers at the Encore Screenings on August 30 & 31, 6:30 pm - 9:30 pm at The Screening Room Cinema Cafe at 880 Alberta Drive (Suite 207) Amherst, NY in the Boulevard Mall.  Tickets are $10.50 and can be purchased online at https://48hfpencore.brownpapertickets.com/ or at the door on the night of the screenings.