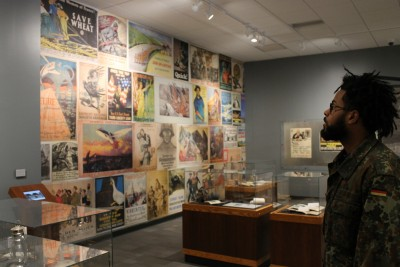 Commemorating the 100th anniversary of America’s entry into World War I (WWI) in 1917, Buffalo Never Fails: The Queen City and World War I looks back to a critical time in our nation’s history, emphasizing Buffalo’s role in the war and the related consequences. This exhibition honors stories of individual heroism and describes sacrifices both on the battlefields and here at home.

Central to the exhibition is the Buffalo & Erie County Library’s extraordinary collection of World War I posters, donated in 1919 by prominent Buffalonian Edward Michael. The collection includes posters from the United States, Canada and Europe, representing some of the finest examples of graphically designed war propaganda. In a time before television and social media, these motivational artworks were effective in encouraging military enlistment and appealing directly to citizens to back the war effort, buy bonds, conserve food and support the Red Cross. Evocative items from the Library’s Rare Books & Special Collections, as well as artifacts on loan from other institutions and collectors, help illustrate the “War to End All Wars.”

The exhibition is located in the second floor Collections Gallery and is free and open to the public during all Central Library operating hours until January 2020.