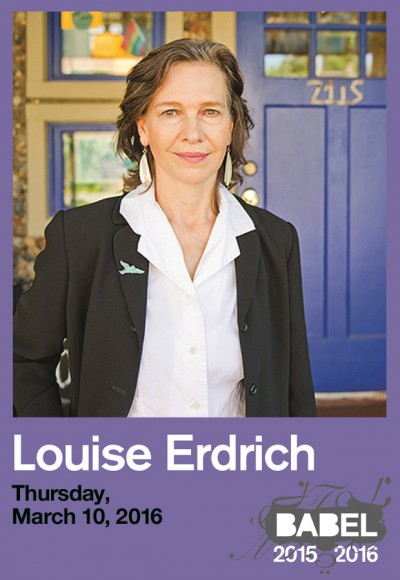 Just Buffalo brings Louise Erdrich to Buffalo. Erdrich grew up in North Dakota and is of German-American and Ojibwe descent. She is the author of fourteen novels as well as numerous volumes of poetry, children’s books, and a memoir of early motherhood. BABEL readers will be focusing on The Round House which chronicles a young boy’s coming-of-age on a Native American reservation following the violent rape of his mother.

Love Medicine won the National Book Critics Circle Award; The Plague of Doves earned a Pulitzer Prize nomination; and her latest novel, the New York Times bestseller The Round House, won the 2012 National Book Award. Erdrich lives in Minnesota with her daughters and is the owner of Birchbark Books, an independent bookstore.

Erdrich is one of four important authors that Just Buffalo is bringing to Buffalo this year, engaging local audiences, attracting guests from across the country and Canada, and creating a global literary conversation right here at home.