The Entrancing Nature Behind Optic Oppression 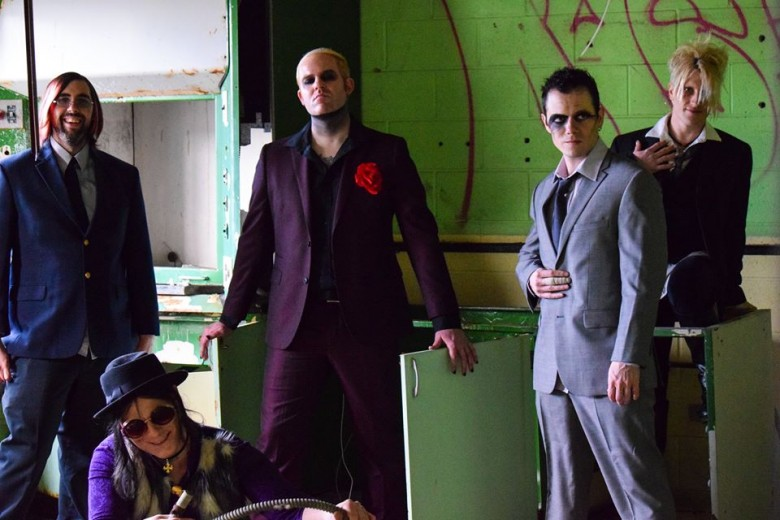 After some bands hit it big, or get close to hitting it big, they ditch their roots and lose the respect of the communities that watered them. For a brief period they are able to capitalize on a new flaky fan following, but eventually they collapse back into nobodyland. That's not the case of the industrial-heavy, dark, electronic glam god militia known as Optic Oppression. The five-member squad has amassed a fairly large following on grit and respect alone.

"I think there's something about us that we project on stage and in our photos that people gravitate to," said bass player Tracei Berlin. "We have fans who are absolute diehards and love what we do. There are a ton of familiar faces at our shows...that is the Optic family, that is the Optic camp."

This sheath of familiarity may catch off-guard a non-Optic fan or a person attending a show for the first time, just as it does outside listeners of many other bands that have developed cultlike followings, such as Tech N9ne and Strange Music Inc., the Insane Clown Posse, Gwar, The Grateful Dead, and even The Beatles.

These movements in music are mechanized, not with forces that be, but with forces that choose to be, and those are the fans, the street teamers that back up a group because they whole-heartedly believe in them.

What's good to know about an Optic Oppression show is that no one is going to deprive you of an experience because you don't fit in. No one really does.

"Optic fans are, in a way, a bit of a reflection of us. I mean, they're not status quo," said drummer Mike Novo.

My first Optic concert experience was last year at Mohawk Place. They headlined with Assemblage 23 and Standard Issue Citizen. I went in a little presumptuous, hoping to find only what I wanted to find. It's difficult to break past barriers in show atmospheres thinking this way, but it's also hard not to. My former experiences have shifted me into a defeatist mind state.

At the Optic Oppression show I learned that this didn't really matter as much as how the music was supposed to make you feel while you listened. In their performance of "Big Boys Don't Cry" off their Find a Way EP, singer Kendall Cage moved stealthily, poised, pausing at precise moments to catch a photographer's light, whipping his microphone above his head at just the right drum kick. Watching him was akin to watching a Tchaikovsky ballerina pas de bourreeing in slow motion, if that ballerina were staged on a post-nuclear battlefield and wore gunmetal eye makeup.

All of the other members of the band: Mike on drums, Tracei on bass, Arrow Fitzgibbons on guitar, and Greg Burt on keyboard, were lightly choreographed and just as entrancing. They appeared to exist in and of themselves, but at the same time they pushed each other, ensuring that no one member was left standing in the queue for too long. Their dexterousness gave me goosebumps.

I detected no music cattiness while at the show that night, but the ongoing Facebook rumor mill tells of an otherwise torrid romance.

"Some people think we came out of quote unquote nowhere," Mike said. "But we didn't come out of nowhere."

The band assures their haters that they've paid their dues: Mike was a touring musician for years with As Summer Dies, Arrow (Third Realm) has been involved in the underground scene for more than a decade, and Tracei (Mad Yellow Sun), Kendall (HellRaiser, 86 to Nowhere) and Greg (Digital Afterlife, FTMP Events) have been or are currently in bands not affiliated with Optic Oppression.

Regarding the internet rumor that the band "bought their success," they won't apologize for anything, but will be the first to own everything.

"We're a boy band without any boy in it. We have two machines, one dino, and two androgynous sex gods. We're not suppose to say this stuff, but that's how I feel," Arrow said.

It's also pretty hard to buy your way to fame on a PBR beer budget.

"What money? We don't have any money," Arrow joked.

While no fan may really fit in, whether it be at a show, at their job, with their family, or in society at large, they leave with some comfort: it's okay to be noncompliant in matters of style and taste, or as Mike said, "It's okay to be weird."

It's also okay to agree to disagree. The multi-threading unit is aware that they aren't everyone's cup of tea. At times they aren't even each others' cup of tea, but they adapt to and adopt from each other, banding as one for a common purpose: to help fill a void in music.

"A lot of our forefathers of glam and shock are gone, such as Prince and Bowie, but it seems like there are people stepping up and occupying that space, and the album Phantom Radio (which Mike introduced Tracei to) is a good example of that...especially for Mark Lanegan, who comes from grunge. I think there are people now realizing that (there's a void) and are occupying the space that our contemporaries did, and we can too."

Love them or hate them, Optic Oppression represents them all.

Check out the release of the Optic's new music video for the single "Sparks 3.33." For more information on the band's latest projects, visit www.opticoppression.com.