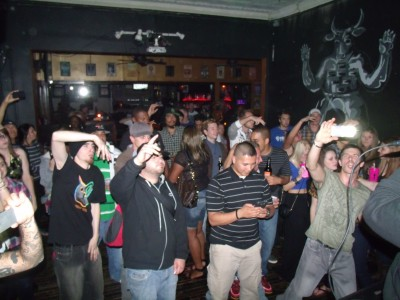 The Buffalo Hip-Hop scene is alive and kicking with local MC's, Writers, DJs and Bboys representing their craft and doing the Queen City proud. After 6 weeks on the Gettin' Gatsby tour that took them across the country and back with stops in over 25 cities, Mad Dukez and Fresh Kils returned to DBGB's for a triumphant final show.

Anyone that has ever been to a show at Duke's Bohemian Grove Bar knows that the venue lends itself to an intimate performance where the performers are accessible to the crowd and the atmosphere is always live. Also joining the lineup for Saturday's show were Steddy P and DJ Mahf from St. Louis, Missouri who got a nice Buffalo welcome from the DBGB crowd.

Coming off a whirlwind tour and the recent release of the new video "Sookie, Sookie", the Dukez and Kils duo was fully expected to rock the house and they did not disappoint. Fresh Kils is one of the regions' best MPC performers/producers and his live performance of several battle-tested routines raised the energy level through the roof. Mad Dukez has a stage presence of a professional MC and his delivery stayed on point from the first drum kick. If you missed the show, check out the video below:

The Grace Lougen Trio Returns to The Rooster!