Buffalo's Own Makes Appearance in Tech N9ne's 'Like I Ain't' Video 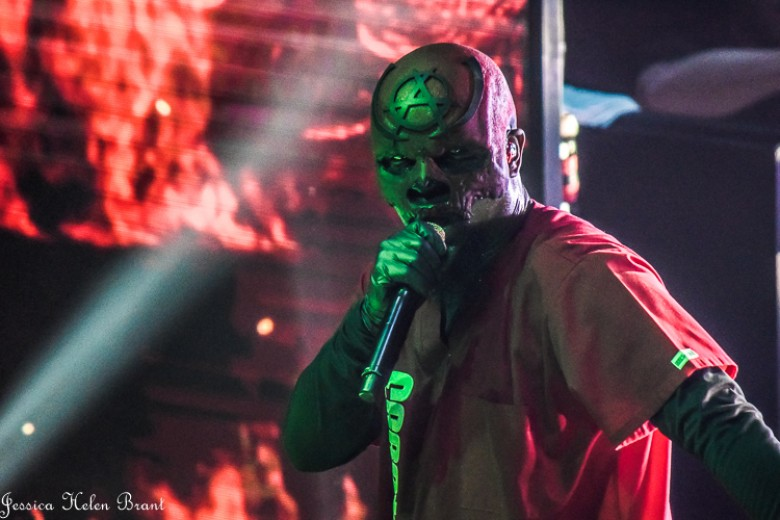 Buffalo got a nod (two if you count his line about Rick James) in Tech N9ne's surprise drop not long ago. His thirteenth studio album, N9NA, has technicians the world over stomping to his 21-track eargasm.

What this album proves is that Aaron Yates is unstoppable, with a career and track record second to none. In his inaugural video off the album, "Like I Ain't," he's busted for killing cops. While locked up, Tech is in holding with some inmates who question his accomplishments.

Tech eventually convinces them that he is the real deal with a flip-it-and-reverse-it, tongue-twisting lyrical list-off of his CV, and his cred is restored. But true fans know what's up. He's addressing the disbelievers, like they don't know he ain't "made a quarter mil for a show."

"It really quick flashes, but they keep using it," spoken word poet and former denizen of Buffalo Nick Givechi said of watching his face appear in the beginning of the video (inside the car) and mid-video (laying on the floor outside of the house from a gunshot wound), which initially started out as just a music video project.

Later during filming, Tech decided to transform it into a mini film series, "Kathartic," for his tour. Now, the film that contains the small acting part Nick was hired to play is making its rounds in other cities, in front of thousands, and potentially millions internationally.

Besides sharing the same hometown, (Nick is originally from the Kansas City area), Tech and the spoken word poet share an independent hustle, and the independently-signed, Forbes record-holding musician must've felt the fire.

When Nick moved from Buffalo to Kansas City in 2015, he followed Tech's business model in executing his goal of growing the city's indie slam poetry community.

"I kept my name and the slam's name in the forefront of everything. If nothing else, the independent hustle and the constant going at it, I figured, would at least catch somebody's attention," he said.

But what about the Tech N9ne connection? Nick said that he waited 24 hours in line to meet him at an album signing for the Strangulation release at a local FYE in Kansas City while holding the position of slam master of the scene. The artist is known for announcing surprise pop-up events and appearances, and Nick knew it was his chance to make an impression.

Nick met Tech, and the two exchanged briefly. Tech introduced him to his crew, including Ubiquitous of CES CRU, an artist signed to his Strange Music record label, and whom Nick established a creative relationship with.

To grow the slam, Nick asked Ubiquitous to become a guest judge in February of 2016. As a direct result of that appearance, Nick witnessed the slam's attendance spike to ten times its normal volume.

But as quickly as the Kansas City scene grew, it fizzled out just as fast.

"I kind of got muscled out of the poetry scene," Nick said after the Ubiquitous appearance.

The scene kind of dismembered itself, with people moving their separate ways, working jobs, and tending to families, Nick said.

But Nick kept the passion for his art alive.

He pushed himself so much that his influence became "ubiquitous" around Kansas City, catching the attention of a major player. Nick signed to a talent agency last August, and one of the first calls he received from his agent was regarding a request by Tech N9ne's people. Tech wanted him to be an extra in his video.

What does it feel like when your hometown hero comes knocking at your door?

"Surreal. It's one of those things where I've dreamed of being a performer since I was six years old...I've put myself at financial risk time and time again to make this happen," He confessed. "You get to an age where shit starts to get to you...you slowly accept that...maybe it's just a hobby."

Although a small part with a speaking line, Nick is still beaming. What made the experience extra special was how Tech pointed out Nick's professionalism on set. That made everything worth it according to the local artist.

"It almost feels like a disconnect," he said. "I'm realizing I'm starting to live the dream, but it still feels like the dream."