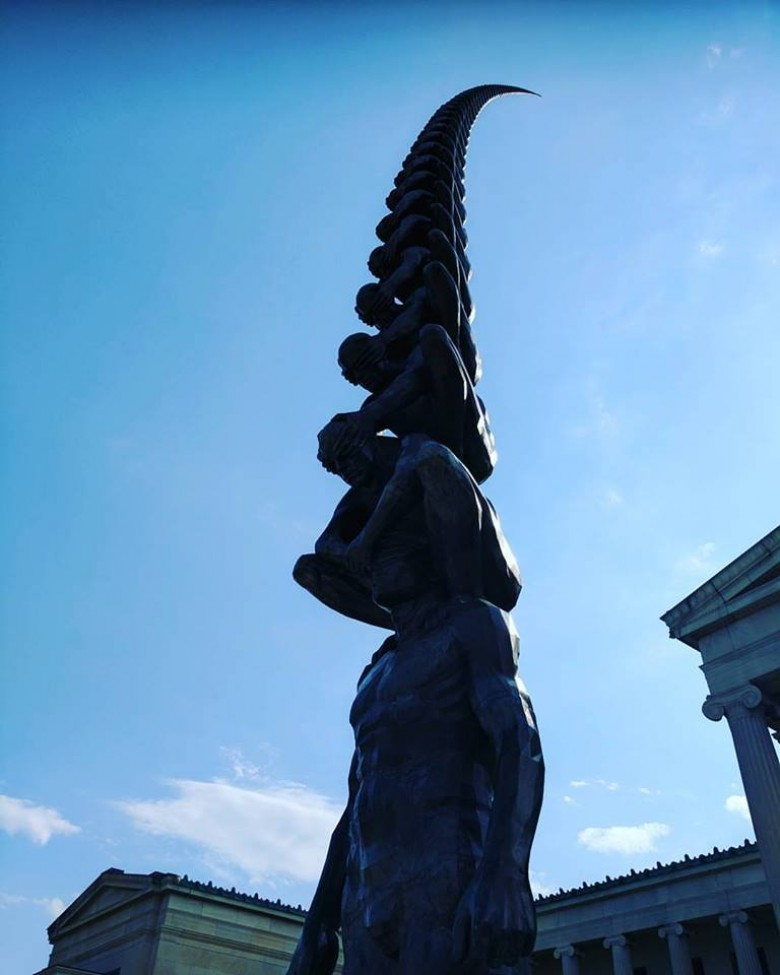 - Share this page -
Who needs a king when the queen is just as boss? Exactly the point Buffalo MC Angelo Luciano makes in his autobiographical project, The King is Dead, Long Live the Queen, except that he's not talking about a person. He's talking about the city that taught him all he knows.
Angelo is making his comeback to the local hip hop music scene in an audacious way, even dropping his sobriquet, Thrice Third, to make a point. When your skill is unprecedented, you don't need any smoke and mirrors, unless the mirrors are for personal reflection and the smoke is blazing from the end of your samurai rap sword, all points he makes comfortably in "Soul Movement." This track explores how music, especially the storytelling of classic hip hop, has healing power over the soul, allowing you to just riff from a place unstaged and uncontrived.
"They wanna know if I can kick it, doubting if  I could rip it, shooting me a look but never getting specific, took a little hiatus now all of my haters throwin' salt on my name and questioning my status. But they could never fade it, I'm way too creative, and the tongue is too native, officially reinstated," is how the second verse in the first track, "Can I" begins, and also plumes, like a vapor cloud in the sky, each rhyme slowly building on another, growing bigger, fiercer with each syllabic exhale. It's a track A Tribe Called Quest could get down with.
The project features beat seasonings by Daringer, who sampled historic work from local Buffalo musicians for this project. Daringer is also a force to be reckoned with; he has loyally produced for two Buffalo MCs on the rise, Conway and Westside Gunn, both of Eminem's Shady Records fame. The project features additional rap stylings on the track, "Effect," by two veteran MCs, known in their circles as Ajent O and Prosper.
Buffalo is indubitably a city that makes and breaks MCs, and in The King is Dead, Long Live the Queen Angelo talks about the struggles of both, even applying them to a larger context, from struggle within self, from person to person, and within the city, emphasizing the importance of education, which begins with ourselves. Each one teach one, as the saying goes. Success spreads like seeds if a community wills it to, and for Angelo, his personal successes are attributed to the lessons he's learned from the people and experiences he's encountered within day-to-day city life.
"By the time I released [the project], I had gone through important experiences in life and decided to just strip everything down to kind of my raw self with regards to how I present myself to the world creatively. So the concept was there but evolved naturally," according to Angelo.
Nobody's perfect, not even a queen. The King is Dead, Long Live the Queen culminates in a final story, "The Queen," which accurately documents the rich cultural past and bustling future of a city torn, it seems, between motive and meaning. Angelo urges us to look inside ourselves to assuage the conflict.
"I think, as a community, we have to make sure we ask and hold leaders accountable for not just stimulating economic growth, but for preserving our communities and stimulating growth and progress in all of the other areas that Buffalo needs, that the people here really need," Angelo confesses. "I think these problems can be fixed, but we need to get people to really see these issues and what really causes them, then we need everyone to get on the same page about fixing them. That involves a lot of coordination and a lot progress being made in other areas, culturally. I think we can do it, though."
Listen to The King is Dead, Long Live the Queen below:
- Share this page -

Jessica is a music editor at BuffaloVibe.
Advertise With Us
- Featured Event -
Sat Dec 17th