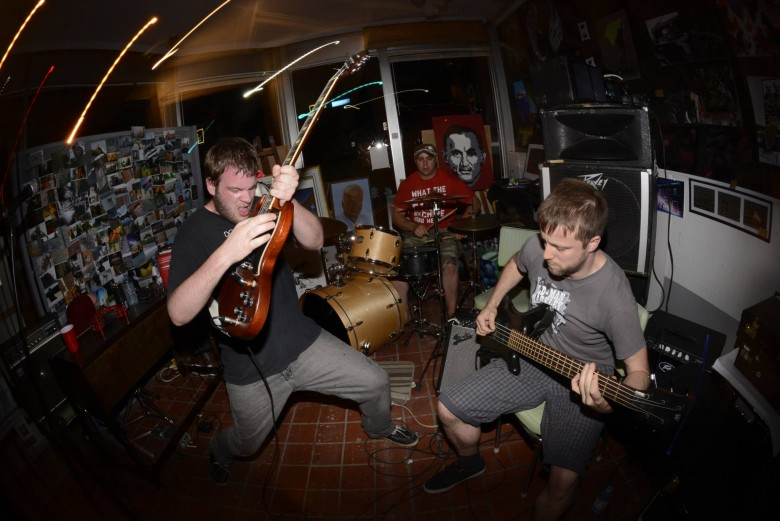 The Smile Case Members: Left, Ben Andress on vocals and guitar, center, Jackson Cronmiller on drums, and right, Shane McElhone on bass.
- Share this page -
Ben Andress is a scene kid to his core. From his Neolithic shag beard and Soul Asylum band tees to his infectious and peculiar humor that reads like a dialogue from Beavis and Butthead, he represents all things good about the independent music scenes of present--the camaraderie, the hustle, the penchant for nerd culture.

As owner of the Southern Ontario-based record label Blacktop Records, Andress understands the important role that live touring plays in building a grassroots fan base into something bigger. For Andress, live touring is an inherent part of the culture, and one he enjoys the most, because he gets to connect with fans in the music scenes of different cities, such as Buffalo, where he will be playing Stamps the Bar for a special solo performance under his band name, The Smile Case, on Thursday.

The musician, who plays electric and acoustic guitar at his shows, fell into vinyl distribution not too long after he ended his gig as a frontman for a band in college. He continued to receive emails from promoters looking to book his band, but instead Andress thought it a clever idea to pitch his friends' bands for bookings.
After wanting to get into more of the music distribution end of the business, the independent musician found it was much easier to cut out the middle man and release new music himself, which gave way to the creation of an independent label.
"Now I'm putting out vinyl for Lisa Loeb, Teenage Dirtbag, and MC Larz," Andress said. "[The idea to start a record label] turned into me selling music by all of my favorite bands from the '90s."
Blacktop Records now represents a hodge podge of nostalgic and upcoming artists with unique and recognizable sounds, such as Meghann Wright's poppy Americana, Wheatus' "Teenage Dirtbag" quirk rock, and even the original Buffalo comedy rock group Green Jello's silly wordslinging. Andress's band The Smile Case is also included on that roster, a band whose procured sound relies on meaningful observation.

Andress admits that his song-writing process is a bit unconventional.
"A lot of the lyrical content has been written as an observer, and the lyrical process has been odd," he said. "As dark as some of the lyrics are, I've actually been influenced, as oddly as it sounds, by Tom Petty."
This comes as no surprise as you listen to songs like "Pill Sick" off of The Smile Case's recent acoustic demo release, Murder Weather, where an upbeat guitar melody placates a funeral party inside of Andress's head, or the crinkly, aggressive vocals on "Never Be As Cool," a hipstery, teenage breakup song that sounds like it was written in the spirit of Tom Waits. The musician uses dark humor and punky undertones to bring out the expressiveness in each track on the project.
The self-pity plea is an angle that works in Andress's favor, as it has for many other artists who pull inspiration from the darker side of existence, like the Violent Femmes and Nirvana. This is especially interesting when you consider the moxie it takes to succeed as a record label in the music industry today. But The Smile Case's acoustic samplings demonstrate to a wider audience that some of the best artists experience feelings of constant self-doubt, even when they are at the top of their game.
"Even when you think of Linkin Park or the Cranberries, they wrote about that stuff, you can hear the pain in their lyrics....and they are no longer with us," Andress said. "I feel like if someone like Chester Bennington or Chris Cornell never wrote music, they never would've been here past their twenties to share their stories and make human connections which have helped a lot of people."
The Smile Case is currently in the studio wrapping up their new album. Until its release, Andress will continue touring solo to share his own story with as many people as he can.
"That's what the scene's about. It's about making new friends," he said. "You go to a show and you meet somebody you never met and you hit it off....I think it's super awesome. The scene is a community and that's what I hope people pull out of my live show."
Ben Andress will be performing at Stamps the Bar this Thursday as The Smile Case with Ophelia's Looking Glass, North Divide, and TMMC. The show starts at 6:00pm and tickets are $5 presale, $8 at the door. For more information, visit the event invite.
- Share this page -