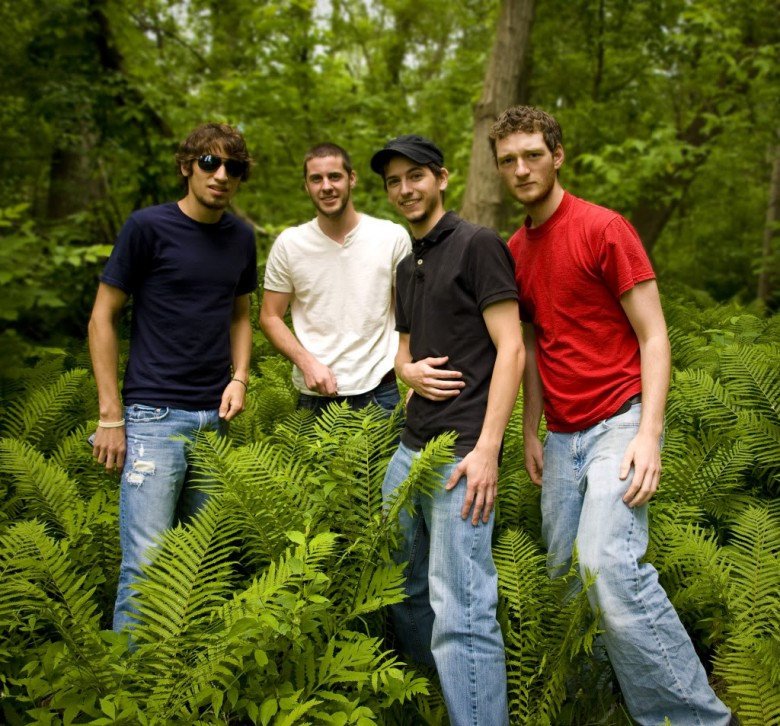 Basically, Aqueous rocked the house at Nietzsche's on Saturday during the Allen Street Art Festival. What struck me most about this young Buffalo-based band is the level of their musicianship. Every song on the 50-minute setlist kept the cheering fans out on the dancefloor and took the crowd on an exciting musical journey.

Aqueous aptly describe themselves as a "progressive rock jamband" - incorporating winding 3-minute bridges, strong harmonious vocals and tasteful guitar solos on songs like "Cellino" and "Triangle". The 2011 release of "Giant Something" is the band's first full-length studio album.

I recently had a chance to chat with the band about their musical style and what they've been up to lately.

BV: Your website describes your sound as "A meld of rock-based jamming and shifting improvisation". Tell us a little bit about your influences.

Aqueous: That's always a tough question for us only because we listen to anything and everything from jam/rock to underground hip hop and everything in between, and whatever we're listening to at the time finds a way of making its presence felt in our jams it seems. Classic/progressive rock sort of laid the foundation for us musically in the beginning, whereas more improv based jam bands like phish, moe, and Umphrey's McGee played huge roles in our personal and group influences later on. I think we all go through phases.

BV: Everyone is always interested in hearing how bands form. How did you guys meet and get together?

Aqueous: Long story short, two bands existed during our days in high school, one doing Rush covers, the other doing Hendrix/SRV stuff, and eventually both bands formed to create what's known as Aqueous today. We had mutual influences and really the common thread for us was Pink Floyd's music, and that sort of brought us together in the beginning. We starting writing our own stuff back then and would slowly work it in to the few shows we had, which is funny now in that we play an almost entirely original set and work in few covers, which is exactly what we wanted to be doing by now.

BV: Aqueous has played quite a few shows now. What are some of the more exciting gigs that you have played?

Aqueous: I think we all feel pretty grateful for the amount of incredible gigs we've had inside and outside of Buffalo over the past 5 years or so. There's a great local scene that we're really happy to be a part of, and some of our favorite shows have gone down at Nietzsche’s right here in Buffalo. A few memorable gigs for us include a run out to St. Lawrence University at a venue called the Java Barn, playing on the Artpark stage, and some really killer shows in Erie, PA over the past year. We've also been lucky enough to play with some bigger bands on the national scene, including Tea Leaf Green, Giant Panda Guerilla Dub Squad, The Heavy Pets, Dopapod, and being on the same festivals with some other awesome acts like Keller Williams and The Breakfast.

BV: Your live performances are very improvisational. What is your recording process like?

Aqueous: I think for any jamband that relies on improv, it can be difficult to really nail down what route to take in the studio. For our last album (Giant Something) we kept the songs relatively concise and tight, but we really expand on them live. That being said, the few moments on the album that were entirely improv are all of our favorite moments from the disc, and the next album will likely feature more improv based jamming on it for that reason.

The band is led on vocals by both Dave Loss and Mike Gantzer but in keeping true to their jamband roots, the guys described the songwriting process is one of collaboration. "Generally most of our songs evolve off a riff or some lyrics that we trade back and forth or jam on live till it sounds cool!"

This summer Aqueous has shows booked all around the Northeast and across New York state. You can keep up with their schedule, archives of setlists and live recordings via their website designed by drummer Nick Sonricker. Their studio album "Giant Something" is available from CD Baby.