An Interview With In The Valley Below 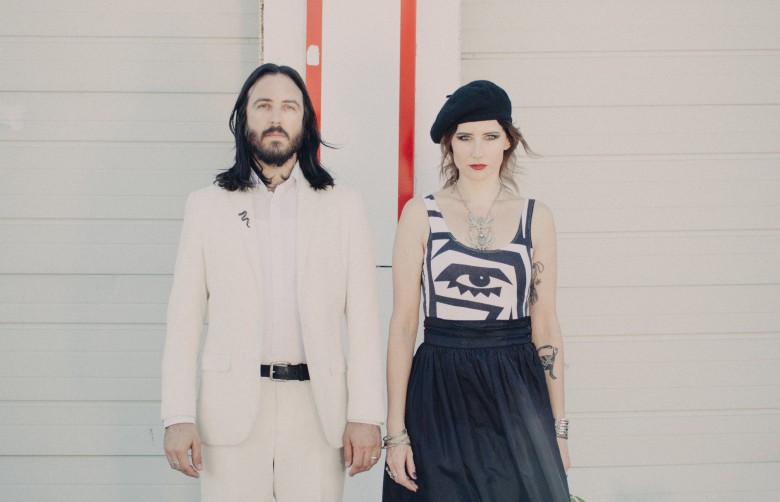 Did you know? Grand Rapids, Michigan's indie dream pop team are also husband and wife. Angela Gail (keyboard and vocals) and Jeffrey Jacob (guitar and vocals) are the fantastic deux (their touring drummer Josh Clair was not present for this phone interview), that are In The Valley Below. They've been on both sides of the music industry spectrum, releasing projects on major labels (their 2013 debut album The Belt on Capitol Records, where their single "Peaches" peaked at number 18 on the Billboard Alternative Songs chart) and indie ones (their 2019 release The Pink Chateau, which also included a film interpretation of the album, presented at Alamo Drafthouses across the U.S. on Bright Antenna Records). The couple communicate personal subject matter as well as topical ideas such as social injustice through their music and art. They were gracious enough to speak with BuffaloVibe about both.

BV: You guys have released some really cool bonus content for fans, such as the filmed accompaniment for your 2019 album The Pink Chateau and the merkin artwork you created for it. Do you think it's essential for bands and musicians to provide different content for their fans to experience their music differently?

Angela: I don't know if they have to. I think it's kind of fun as an artist to do something different than the music. I think it's cool that the fans like it but it's also kind of a selfish thing I like to do myself...I'm a music fan, too, but I don't really expect them [artists] to do stuff like that. It's kind of a nice little extra.

BV: Can you describe the house you guys recorded The Pink Chateau in?

Angela: It's a 100-yr-old house in Grand Rapids, Michigan. We moved here from Los Angeles, and it actually kind of looks like a chateau. It's all pink. We built a little studio in our basement, so usually all winter-long we hunker down there, stay warm, and make music.

BV: For your single "Desperate Dance" off of The Pink Chateau, I read that you guys winged the location and filming. Have any of your other music videos been executed that way or is that the first time that's been done?

Angela: Hmm...I'm trying to go over all of the music videos we've made. Maybe "Hymnal". We made a video for "Hymnal" we had an idea for, and then, after I got all of the footage, I edited it and tried to figure out what I was going to do while I was editing. So, I've definitely done that a couple times.

BV: Do you think some of your best work comes out like that, out of the spontaneousness of the creative process?

Angela: I feel a lot of times when we record songs, we have the song written, but then when we go to add other elements, we kind of mess around until some accident feels right, you know?

BV: Going back to The Pink Chateau, you said in a press release that the film was "a story of sexual discovery and freedom from taboo...an inviting place where female sexuality is beautiful curiosity and not a shameful secret." Speaking culturally today, do you believe more open spaces are being created for women to discuss their own sexualities, and through your project, do you believe you are adding something unique to that conversation?

Angela: Yes, I definitely think so. It's like every month it becomes even more open...I think that's my contribution with the movie [The Pink Chateau] ...is...not only just like making it a story about a...woman, but also saying it with my intention...and that's what I wish I would've had [when she was younger], and that it's OK. It took me a long time especially when I was a teenager and everything was so shameful and wrong, and you grow up and realize it's not, it's normal. And maybe it was some sort of therapy for myself in some way.

BV: Jeffrey, in speaking on the idea that Angela just elaborated on, do you think it is an important message for men to receive and embrace as well?

Jeffrey: Definitely. I think that we're all in this together and I think we all got to get on the same page as far as that goes. There's been a  lot of stuff going on lately and guys have to kind of step up, but the thing is...it's not rocket science to me. It seems pretty simple and obvious. My basic rule is don't be a dick, so I think if most people would just keep that in mind, we'd all get along really well.

BV: I want to shift to your music video for "Bloodhands" really quick. I love that video. Is that subject matter outside of what you guys normally explore in your music, and, did you at all worry about how your fans would receive it?

Jeffrey: Technically that was our first topical song, and then the video too, it broached some of those issues. I wasn't really worried about how our fans would receive it, mainly because I felt like we were coming from a good and honest place, and we're not trying to be pedantic or tell people how to believe or what to do, it was just sort of raising some questions. It felt good from our perspective.

BV: Can you take us through the creative process for the music video?

Jeffrey: Angela wrote it with our friend Chris Johnson who also did the cinematography on that video. The initial idea for the voodoo dolls came from the head of our record label, Tiffanie Debartolo, so we kind of took her voodoo doll idea and expanded it, but I think the main leading force behind it came from Angela.

Angela: We knew what the song was about, the Michael Brown shooting in Ferguson, Missouri, and we didn't want to be too on the nose with the music video and with what was happening. Tiffany from our record label did say something about voodoo dolls and I thought it was the best idea, so I wrote that story and I liked the idea of children being in control of everything. That was basically the idea.

BV: Did you guys at all feel it was a risky undertaking because of your race?

Angela: I don't. I feel like I wanted to let the African American population know that we're on their side, you know? I feel like talking about the story and spreading the word and showing our solidarity is OK. I'm not saying I know every situation, and what's right and wrong. I just tried to paint a little picture and bring a little awareness to other white people.

BV: Do you think many artists and musicians today become advocates by choice, or are they "called to duty" for lack of a better expression?

BV: Can you guys share any favorite works of art or artists you've been inspired by lately?

Angela: There are a couple books I read recently that I thought were really great. ... it was such a weird book, I loved it. It was by James Hannaham called Delicious Foods. He's an African American author everyone should know about. The other book was called No Walls and the Recurring Dream by Ani DiFranco. I think all women should read that book, it's really good. It's her life biography, but she's learned some really interesting philosophies along the way about women and men.

Jeffrey: There's an artist in Portland that we know, her musical project is called Omnibooks. She also does this thing called Project Female Model. It focuses on female artists of all mediums and it puts the focus on their work and not their age or their beauty or anything like that. It's just about the work they produce, which is a really cool idea.

BV: Because you're playing a beer festival in our neck of the woods, I have to ask, favorite beer?

As for the remainder of summer, Angela and Jeffrey told BuffaloVibe that they will be "collecting life for songwriting" as they do more touring. Their next stop brings them to North Tonawanda for Brews on The Water 2019 presented by Alternative Buffalo at Gratwick Waterfront Park on Saturday. Also performing at the event is pop rock band American Authors. Doors are at 5 p.m. Tickets can be purchased here.