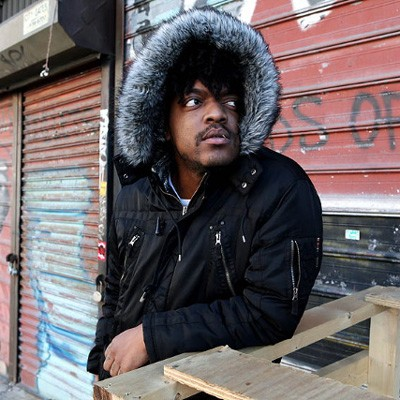 For me to describe Mr. Polygon as a bit odd would be an intentional understatement but the off-beat style of this Tulsa, Oklahoma native is a huge part of his appeal as an Indie Hip-Hop artist.

I first heard of Johnny Plygon in 2008 with the release of the Grand Theft Auto 4 soundtrack on which his "Price For Your Head" collaboration with DJ Latern appeared. Also in 2008 he was featured on the Nas "Black President" track which was also produced by Lantern.

Polygon signed to DJ Lantern's label for a while but decided he was better suited to fight the good fight of an independent artist. Nowadays Johnny Polygon just tours occasionally and lives the life of the Hip-Hop anti-hero. He even has his own online show on karmaloop.tv. The premise of the show revolves around Johnny and his life as an artist. Now on its second season, the show has featured stories about him, Nas, and Cudi and what its like to be in the shoes of Johnny Polygon.

Of course when I heard about the release of his new EP - "Wolf in Cheap Clothing" I was looking forward to checking it out. While Johnny Polygon is the sole vocalist on the EP, the set boasts production by numerous prominent beatsmiths, including Picnic Tyme, Danny Duran and The Soundmen.

The tracks took a while to grow on me but by the 3rd listen I was won over. My favorite track is by far "Someday". Polygon is a very clever wordsmith and his singing style is a cross between a babershop harmonizer and a TV jingle performer making it a perfect match for his unique brand of genre-bending music.

Other Releases from Johnny Polygon include:

Musician, Software Developer and Founder/Publisher of BuffaloVibe.com
Advertise With Us
- Featured Event -
Sun May 10th