Document of Discovery: A Disgrace 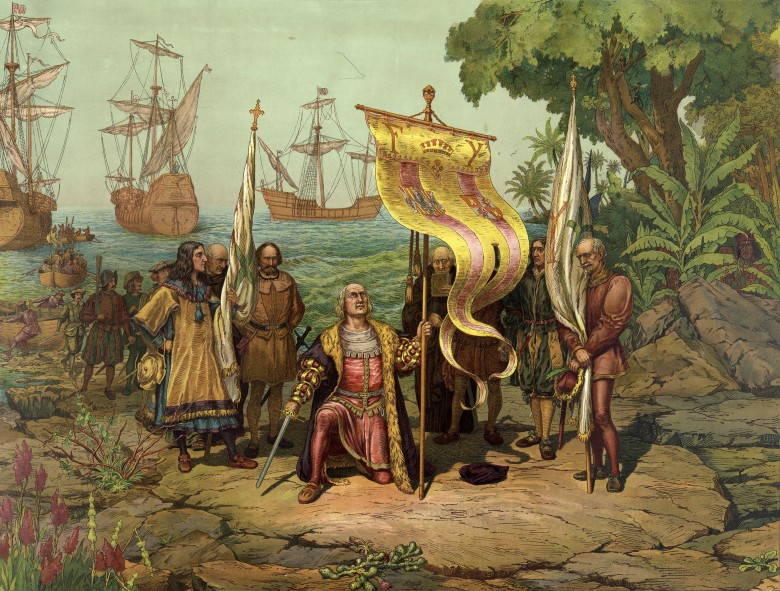 I attended a screening and discussion of the documentary, Doctrine of Discovery: Unmasking the Domination Code. Formulated in 1493 when Columbus returned from the New World, the Doctrine of Discovery has been used for centuries to justify seizure of indigenous land and the subjugation of its peoples. This fifteenth century Papal Bull (as it was called) gave Christian explorers the right to claim lands they “discovered” and lay claim to thrm for their Christian monarchs. Any land that was not inhabited by Christians was available to be “discovered,” claimed and exploited. If the “pagan” inhabitants could be converted, they might be spared. If not, they could be enslaved or killed.

Pete Hill, Cayuga Nation, Heron Clan presented the program. He’s the Project Director of “All Our Relations,” a new initiative intended to improve relations between Native American and non-Native American communities, and to contribute to the health and well-being of the Native American community and friends. Pete visits many agencies and institutions in Western New York to offer educational programs. He was an informed and articulate presenter. He knows his stuff and he was faithful to the time as scheduled. The program took place at Trinity Episcopal Church on Delaware Avenue.

A Native American friend asked me what I learned from the presentation. The answer? A lot. I learned of the existence and the history of the Doctrine of Discovery (DD) of which I was unaware; I learned that the DD is evil and yet it is in effect to this day; that it was perpetrated by the Roman Catholic Church (the church I grew up in); that the refusal to repeal it lies in the realm of property rights; that even Pope Frances (best thing to happen to the Catholic Church in centuries) won’t consider its retraction. I was shocked to learn that as recently as 2014, Ruth Bader Ginsberg wrote an argument that upheld its tenets. Even the good guys fear the ramifications and won’t touch this appalling Papal Bull.

Those are the facts. My personal take-away was to reinforce my belief that greed—the insatiable lust for money and power—runs the world and leads to the evil in it. It did in 1493 and it does so now. A more common belief is that explorers judged themselves superior to indigenous peoples, labeling them savages, barbarians, inferior and uncivilized to justify their subjugation, domination and exploitation of native peoples and their lands.

We were a small group at Trinity Episcopal Church—just four participants. We discussed our personal relationships with prejudice: our history, how we learned about other cultures, what were we taught to think about them. The discussion proved cathartic—a safe place to talk about tough stuff.

The discussion moved on to include the trauma experienced by native peoples that has sustained generations. From a mental health standpoint, I was especially interested in “Trauma Informed Care.” We no longer ask, “What’s wrong with you?” but more “What’s happened to you?” This is the modern approach to mental health care for Native Americans. My wish is that it be adopted universally—a much more humane approach to treatment.

We had a brief discussion on Unseen Tears, a program about the impact of Native American boarding schools In WNY—a shameful period of our history. Those actions were taken based on rights bestowed by the DD.

Pete gave us handouts titled “Native American Cultural Teachings” that included A Message From Tecumseh, a great leader of the Shawnee Nation. They read like rules to live by. Two in particular caught the eye of this senior citizen:

I am putting these up on my inspiration wall.

Pete took our e-mail addresses, so we will be hearing about future activities including dances—Yaaay! I love to dance. My sister came with me and she is interested in pursuing more information and attending cultural events, as well.

I highly recommend this program and am interested in pursuing other informational events offered by “All Our Relations.”

The next scheduled event is Teachings of the Medicine Wheel, Thursday May 3 at 1:30 pm, at the Orchard Park Senior Center, 70 Linwood Ave, Orchard Park, NY. Call 716-662-6452 for more information.