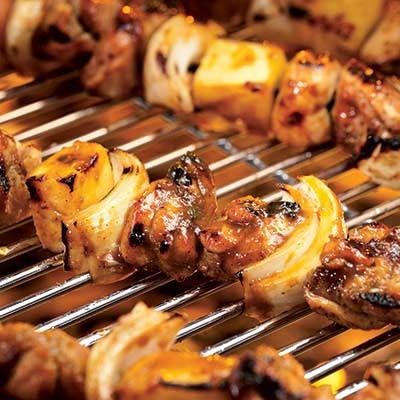 Who says you have to be a carnivore to enjoy the sweet, spicy flavors of Jamaican Jerk cooking?  Jamaican Jerk kabobs not only provide plenty of protein, but will seriously boost your daily intake of fresh fruits and vegetables!

Dump thawed vegan chicken chunks in a large shallow dish. Use a fork or meat fork to punch holes into the chunks, which will allow them to absorb more marinade. In traditional Jamaican cooking, the meat is scored and rubbed with the sauce for more flavor.

Drain juice from pineapple; reserve juice in a bowl, and add pineapple to the vegan chicken chunks. Chop peppers and portobellos into bite-sized chunks that will easily stay put on a skewer.

Slice the halved onion vertically into wedges. Add peppers, portobellos and onion to the pile of vegan chicken chunks.

Chop escallions and thyme, if you're using thyme leaves. Add escallions, thyme, and all other Jerk marinade ingredients to a blender or food processor; puree until smooth.

When chopping the peppers, be sure to wear rubber gloves, and wash your hands thoroughly afterward. And whatever you do, don't rub your eye! You can decrease the heat of the peppers by discarding the seeds and by reducing the number of peppers you use.

Likewise, you can turn up the heat by retaining the seeds and increasing the numbers of peppers. You can add a little more soy sauce, or even some of the pineapple juice, to make the marinade more liquid if you like.

You can also experiment with using different types of organic produce. Try cherry tomatoes, mangoes--whatever you like.

To make this meal truly traditional Jamaican, serve the kabobs with a side of hard dough bread. Red Stripe beer optional.

Serves four. You be jammin', mon!