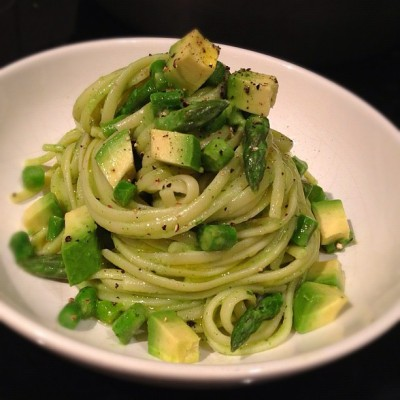 One half organic onion

One half cup organic balsamic vinegar

Bring one large pot of water, and one smaller saucepan of water to a boil.  Meanwhile, chop asparagus into one-inch chunks.  Dice peppers and avocados.  To dice the avocado, carefully cut around the entire circumference with a knife. Twist the two halves in opposite directions until they come apart.  Squeeze the half holding the pit until the pit pops out. (If you rinse the pit off, it makes a silly temporary cat toy.)

Use a knife to cut long parallel lines into the avocado, then cut lines perpendicular to those.  Use a spoon to pop the cubes out of the skin.  Slice onion very thinly, then cut each thin slab in half and separate layers to create slivers. Whip oil and vinegar together in a smaller bowl; adjust ratio of vinegar to increase tanginess if you like.

When smaller saucepan of water boils, add asparagus and cook for only two minutes--no longer!  The water may not return to a boil, which is just fine.  You want the asparagus to be quite firm.  Drain asparagus, then place back in saucepan and cover to keep warm.

Cook fettuccine in large pot of water until it’s al dente; in other words, until it’s just done and still firm--not overcooked and mushy.  Pasta is healthier if it’s not overcooked.

Drain pasta and then place in large bowl.  Add vinaigrette to noodles and mix until noodles are thoroughly coated. Whip up more vinaigrette to add if you like.  Add asparagus, peppers, avocado, and onion.  Fold mixture until vegetables are evenly distributed throughout the pasta.

If you want a little protein to accompany this dish, serve it with a light-colored organic or local semi-hard cheese on the side, such as raclette.  This dish also pairs nicely with white wine.  It easily serves six.

This dish is addictive, so there won’t be any leftovers--which is a good thing, because the avocados won’t keep anyway!