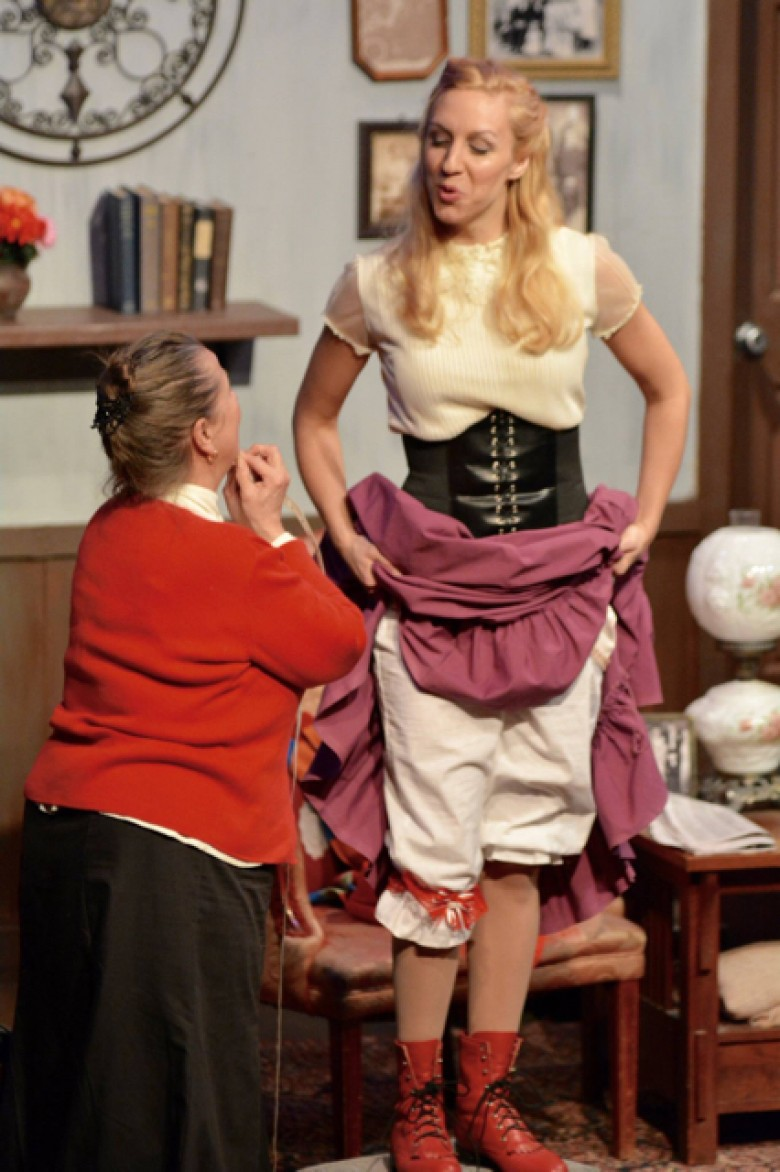 - Share this page -
I saw London. I saw France. And everyone saw Frau Maske’s underpants. The great bloomers fell to her ankles as the German king passed by during a parade in 1910. Almost everyone in Dusseldorf bore witness to this early 20th century wardrobe malfunction, and those that didn’t heard it from those that did.
This is a very funny, if sometimes uneven, play adapted by Steve Martin from the German “Die Hose” by Carl Sternheim, and currently on stage at American Repertory Theater of WNY. It opens as the Maskes return home from the parade; the unfortunate and naive Frau Maske is sure no one noticed, while the apoplectic Herr Maske is sure everyone did. He rants and raves that he might lose his job as a government clerk if the King were to get wind of this humiliating incident. Worse, what if the King witnessed it himself? Meanwhile, the Maskes are trying to rent a room in their house to increase their income so they can afford to have a child. Two gentlemen, one a dashing poet, the other a hypochondriac barber, immediately wish to lease it. Guess why?
The plot, such as it is, exists as a platform for bawdy, farcical behavior, witty dialogue, double entendres, broad sexual exposition, and the occasional insightful social and political commentary. Director Jeffrey Coyle has the actors mugging, strutting, and wiggling suggestively around the stage while he puts them through their paces.
David C. Mitchell as the martinet Herr Maske is the quintessential patriarchal bureaucrat, clueless as to how obnoxious and offensive he is. He treats his young wife of a year as a servant and refuses to have sex with her until they have enough money for the baby. Still, he is very attractive to the upstairs neighbor Gertrude (Pamela Rose Mangus), and in a hilarious scene, their attempt to seduce each other makes the audience cringe at the thought of their coupling. However, Gertrude backs off at the last minute out of loyalty to the sweet Frau Maske. Candice Kogut as Louise Maske has been a drudge to her husband and is charming as her sexuality is awakened by the fast-talking poet, Versati, who tells her “I’m unpublished, I’m proud to say.” Ms. Kogut shows her mettle as she schemes to be with her newfound love and contends with her autocratic husband, all the while dreaming of the delicious consummation of her affair. Ben Caldwell earnestly spews bad poetry, prances about in an ecstasy of verbiage, and then the lovers do…what? And what of the barber, Cohen, who insists his name is spelled with a “K”? Is he Jewish? Rich Kraemer as Cohen worries himself into paranoia with his imagined illnesses and fear that Versati will triumph with the fair Louise, whose sexual awakening is moved along by Gertrude, who isn’t getting any, either and jacks up her charge with bawdy talk and broad suggestive movement. And then there’s Klinglehoff, the indomitable Michael Starzynski, wandering in and out in his black cape with his notebook, looking very mysterious. What part does he play in this farce?
There were a few opening night hiccups, with some of the actors reaching for lines and seeming unsure what to do next. This slowed down the action in what should be very fast-paced scenes. And, while the comedy is certainly broad, there were a few occasions when it seemed a bit overplayed. ART of WNY is an intimate space, so a little less can be a lot more for the audience. However, the actors' timing in the fight scene, among others, was impeccable and delightful to watch.
On the whole this is a really fun play, with some timely social commentary to remind us that we will have to leave the theater at some point and return to the Realworld. There it is – comedy and tragedy. And I liked the deus ex machina ending, which will not be revealed here. You must see it for yourselves.
Performances are at 8:00pm on Thursdays, Fridays and Saturdays through April 1. The ART/WNY theater is next to The Sportsmen's on Amherst Street, set back from the street.