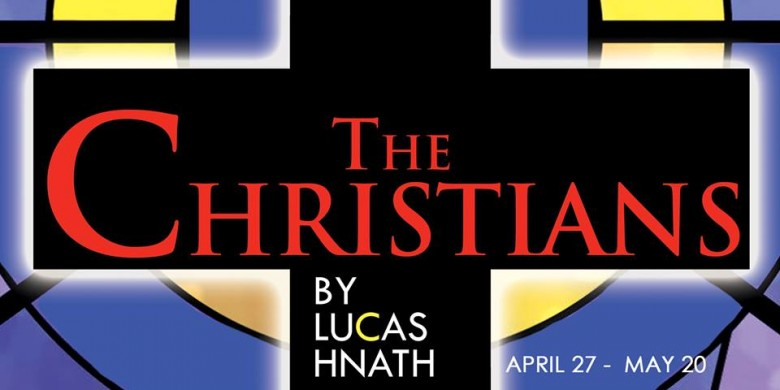 Religious belief is deeply personal and, at the same time, has grave consequences for society and the planet itself. When large groups hold the same belief, that collective can, has, and does, wield great power in the world, for good and for ill, often at the same time. On a smaller scale, religious beliefs taught to children from a young age inform their entire lives, regardless of whether they shed those beliefs later in life. When disagreements arise on matters of faith, the schism effects the whole as well as each person within, whether an entire religion as in the Reformation, on a smaller scale as within one church, or one family.

The Christians, a powerful drama by Lucas Hnath now at Road Less Traveled, takes on a schism that forms in a present-day evangelical megachurch when Pastor Paul announces in his sermon that God has informed him there is no Satan and there is no hell. The word “evangelism” is from the Greek meaning “good news” or “the gospel,” which I gleaned from the handout inside the program. Rather than everyone being delighted to hear Pastor’s good news, all hell breaks loose, as it were. Before this sermon, the thousands in the church believed in sin and hellfire, being saved by Jesus, and being the chosen ones. Now all that is to be tossed out in favor of a deity that embraces everyone. If no one is special and everyone goes to heaven, why bother being good, and what are they all doing in church every week, putting money in the collection basket?

These and other questions of faith, inclusion, betrayal of beliefs, personal betrayal, and who speaks the true word of God form the conflict that develops between Pastor Paul and his Associate Pastor, Joshua, a young man from the streets who the Pastor has mentored over the years. Also involved in the conflict is a Congregant who questions Pastor Paul, an Elder who is concerned not just about faith but about the fortunes of the church itself, and Pastor Paul’s wife, Elizabeth.

The set is the altar area of a megachurch with a video screen backdrop that is used to good effect, both designed by Dyan Burlingame. Two chairs with microphones and a table between are set up on either side of the altar below the lectern. Most of the activity takes place in this area, with the use of microphones being an integral part of communication between the people, not just so the congregation can hear the sermon, but also to amplify words between the characters as they try to make themselves heard by each other. Pastor says on several occasions that "there is a distance between us that is insurmountable."

The cast excels from the moment they enter the stage, smiling and waving to the congregants while singing the Lord’s praises. As Pastor Paul, Dave Hayes has the stage presence and charisma required to be the center of the congregation’s hopes and dreams of a ticket into heaven. In his natty suit and understated gold jewelry, he appears to be totally in charge, the beloved center of this very enthusiastic congregation. As his world changes, his gradual realization of what he has wrought tells on him, and we see his responses very clearly.

Aaron Moss is Joshua, who is very angry and troubled by the change in Pastor Paul’s beliefs. He is the embodiment of the person who torments and tortures himself, and his loved ones, into abject misery by his extreme beliefs. He does a fine job as the acolyte who has dreams of his own.

Lisa Vitrano is excellent as the silent Wife, Elizabeth. She doesn’t speak a word for three fourths of the play, but watching her expressions as the Pastor’s sermon progresses, during the conflict with Aaron and the questions of the Congregant, we have no doubt what is going through her mind. Her expressions are subtle, but clear. And when she does speak with her husband, their exchanges are clearly between a couple who know each other well, her passion and love for him there for all to see.

Victoria Perez is the Congregant, an enthusiastic member who is a struggling single mother. She shines as the adoring woman who gradually breaks down as her questions to Pastor Paul become more contentious, trying to express her love for him at the same time she questions his ethics.

Steve Jakiel is Elder, a kind of father figure for Pastor. He handles all the finances with the Board, so Pastor can play in church. Mr. Jakiel has a very kind and caring presence, while at the same time being firm about the financial implications to the church.

Direction is by Artistic Director Scott Behrend, who keeps this whole business to a tight ninety minutes without intermission.

The Christians asks more questions than it answers. Or, a better way to say that is that it asks questions that have no answers. Who speaks for God? People have been tying themselves in knots for millennia over that one. Wars are fought to this day about it. And is there not a bit of hubris in anyone who purports to know the Word directly from the Creator of all that is? And where there is hubris, is there not a fall? This is a very well-written, well-acted, thought-provoking 90-minute foray into the religious psyche and its effects on the people who believe–and the fallout for people who do not.

The CHRISTIANS by Lucas Hnath

500 Pearl Street Buffalo, NY 14202
Today, Pastor Paul will reveal his honest belief that Hell does not exist. Today, his friend and associate Pastor Joshua will publicly oppose him—splitting our parish and dividing…
- Share this page -