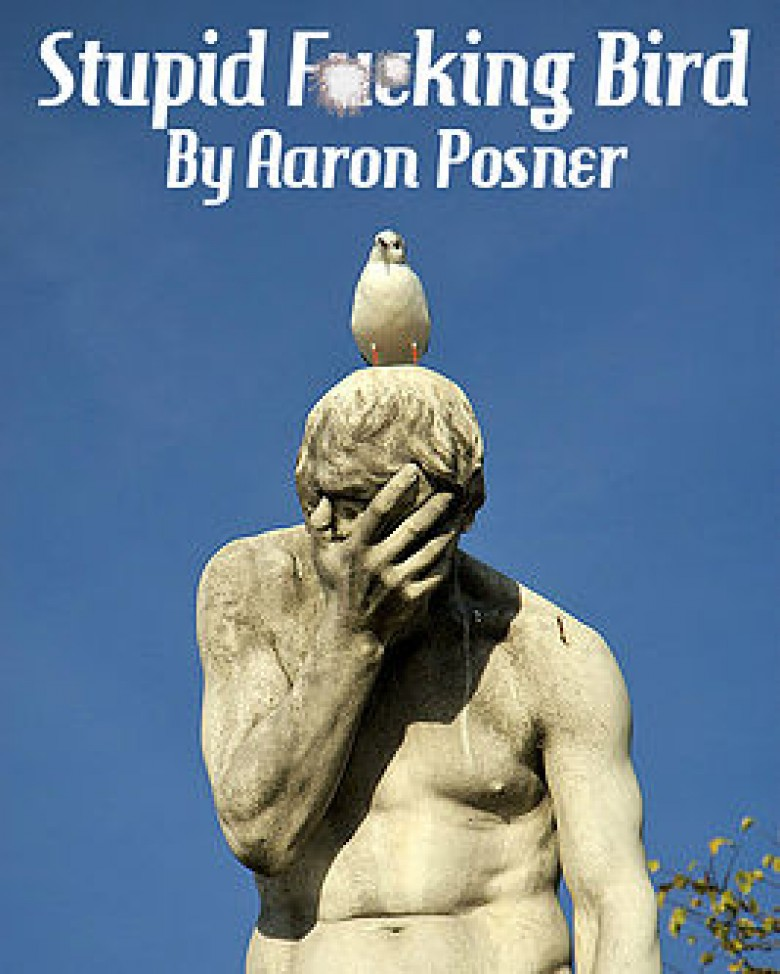 I saw a very smart, very witty, complex, thought-provoking play at American Repertory Theater of Western New York (hereafter to be referred to as ART of WNY) on opening night. If you like that sort of thing, you’ll love this play. It’s called Stupid Fucking Bird and was written by Aaron Posner. If you’re wondering what sort of bird the stupid bird might be, think The Seagull, from that Russian master of 19th century angst, Anton Chekov, albeit with a 21st century sense of humor and sensibility. This play is so much fun and its language so intelligent, possibly even a “new form,” that Mr. Posner must be given all credit for his wonderful creation.

I enjoyed this play at least as much, and possibly more, than I did Christopher Durang’s Vanya and Sonia and Masha and Spike, which I was lucky enough to see at Lincoln Center with David Hyde Pierce, Sigourney Weaver, and Kristine Neilson. Actually, I saw the play with my sister, and the above actors were cast members. The run was sold out, but we went to the box office anyway because, “Why not?” and told the security guard in charge of the box office window lines of our desire. He ordered us to stand in the corner, literally, and not move. So we did, feeling idiotic watching people in the various lines getting their tickets for the shows that night. Fifteen minutes later he pointed at us and then pointed at a box office window. We obediently followed his silent order and gratefully handed over a credit card for two tickets in the 5th row. Yes! We loved the play and it was exciting to be seeing it at Lincoln Center.

So, what is this play about? It’s about love and obsession and loss and betrayal and art and sacrifice and suffering and experiencing moments of bliss and the ramifications of all that. In short, it is about being human. Of course, we don’t all go mad or try to shoot ourselves in the head, even though at times it may seem like that may be the only way to cope with it all.

As to the players, weird little Dev is in love with tall blond black-clad Mash who is in “mourning for my life,” and who is in love with Conrad, would-be-playwright who is in love with Nina, would-be-actress who is infatuated with Trigorin, older famous writer who is the lover of famous aging actress Emma, who is the mother of Conrad. Oh, and Sorn is the older doctor brother of Emma. He is amazed there is so much “feeling” all over the place, although he does tell us later on that he had some moments of passion himself.

These characters interact with each other and with us as they are put through their paces of loving, obsessing, avoiding, fighting and betraying each other. We are an integral part of the proceedings, from the moment Conrad stands on the stage at the very beginning and tells us the play won’t start until someone in the audience says, “Start the fucking play.” I wonder what would have happened had no one spoken up…

The cast is outstanding.

Connor Graham as Conrad cautions and cajoles us as he sinks deeper into despair in his obsession with his muse, Nina, and his unfulfilled desire to create a “new form” of theater, a “site specific performance event” that will change people’s lives rather than just entertain “clever-y, clever-y.” He has us laughing at ourselves while we’re laughing at him. He plays us and plays with us, giving an audience member he knows a beer and asking for an audition from a producer in the front row. He is hilarious and sad and pitiful and is great in this role.

Emily Yancey as the ingénue and muse, Nina, devolves from the lovely wide-eyed innocent in love with the theater, to a seductress who still has that innocent charm, to a woman who has lost everything, including her mind. She handles the transitions with ease, and is particularly moving in Act Three when she returns to the lake house four years after Act One.

Diane DiBernardo as Emma is the re-incarnation of Margo Channing - beautiful, talented, self-involved, impervious to the pain of the people around her, and desperate to be loved. She commands the stage in her monologues and we know she expects us to worship her goddess-ness. Her scenes with her lover, Trigorin, and her son, Conrad, in Act Two are particularly powerful.

Thomas La Chiusa as the writer, Trigorin, seems somewhat amused by all the emotional chaos around him, while he quietly adds to the drama with his attentions to Nina. You can almost see the wheels turning in his mind, creating characters and scenes for his next book from the angst of the people around him. While he is part of the drama, he maintains a distance from it, and Mr. La Chiusa has a wry presence as he watches it all unfold, stepping in when he has the chance to get what he wants.

And on to Candice Kogut as Mash and Rick Lattimer as Dev. They are quite the odd couple, as he salivates over her and she mourns everything, sweetly playing her ukulele and singing songs of dread and loathing of life. Mr. Lattimer is a hoot in his funny hats, aware of how goofy he is and not caring, his eye always on the delectable Mash, while he encourages his friend, Conrad, to let go of his obsession with Nina. Does slow and steady win the race? Will Mash, in her obsession with Con ever get over herself? They are both good comedians, he in his goofiness and she in her unrelenting misery.

That leaves Scot A. Kaitanowski as Sorn, the doctor brother of Emma, who is in love with no one on stage and serves as a counterbalance to all of the drama. However, in a potent monologue in Act three he demands of us “Do you all feel all the feelings you say you feel?” He sometimes feels “I am playing the role of me,” and “I don’t feel…what I pretend to feel,” provocative thoughts for ua all to ponder. Mr. Kaitanowski seems a bit overwrought at times in his dramatic monologues, but handles his witty commentary very well.

Director Michael Lodick brought this great cast together and has done a wonderful job of keeping a fast pace while losing none of the wit, drama and depth of the play, and allowing his actors full expression.

My friend said she will be thinking about this play for weeks, and for her that means it is outstanding. I agree and you can see it for yourself at ART of WNY until November 11th.