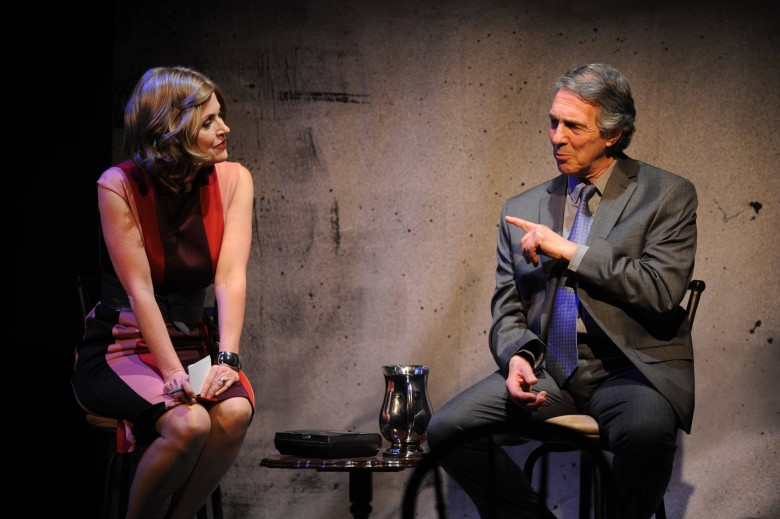 Tsuris, a Yiddish word meaning troubles or woe, is spoken by Jonathan and Patricia in Sight Unseen, as they size up each other in her farmhouse when they meet for the first time since their breakup years before. He is a rich and successful American artist in England for his first retrospective show in London, she the wife of a somewhat older archeologist, living simply in the Cotswolds near her husband’s dig. Why did Jonathan ask to see her after all these years? And what does she want from him that she has allowed the visit?

This Obie Award-winning, Pulitzer Prize-finalist play by Donald Margulies now at Jewish Repertory Theatre mines the past of these two people, as well as the relationship between Patricia and her husband, Nick, and Nick’s part in this triangle. In crisp, bright, intelligent dialogue, Mr. Margulies explores the relationship of the artist to his work and his audience. He poses the age-old question of what constitutes art and what is just narcissistic posing, and explores the relationship of artist to muse. If an artist sells his paintings to wealthy patrons before they are even on canvas--Sight Unseen--is he also selling his soul? The play also imparts a bit of insight into the close-knit conservative Jewish community of Jonathan’s youth in Brooklyn, and his own guilt in having, at least externally, left it behind.

This is a rich and complex four-character play that fascinates from beginning to end. The production at Jewish Repertory Theatre does it justice in every way, from first-class acting to the walking-on-canvas set. By simplifying the set in this intimate space, the focus of the audience is on the words and the actors. Both are sharp and brilliant, as the play zig-zags in time, gradually revealing the motivations, secrets, and desires of the characters.

Peter Palmisano confidently expresses Jonathan Waxman’s confusion, anger, guilt, and defensiveness, as well as his beliefs about his art, and how far he will go to get what he wants. In the interview with Grete, the German journalist, his gradual mistrust and then rage at her increasingly hostile questions, brings him too close to his own fears about himself and his work. Mr. Palmisano is at his best in this interview and in his arguments with Nick about a controversial painting in the show.

The painting depicts a white woman and black man having sex in a vandalized Jewish cemetery. Are they making love or is it rape? Is it art or is it pornography? The painting acts as the catalyst for increasing hostility in the interview between Grete and Jonathan, and in the arguments that ensue between him, Patricia, and Nick at the farmhouse. The interview turns into a desperate attempt by Jonathan to justify his work and his choices as Grete rails at him for hiring a publicity firm and for the contempt he shows for the very people who buy his paintings, while he accuses her of being anti-Semitic as he tries to defend himself while becoming more unsure of his position. Nick declares the painting to be pornography, setting off confrontations between the two men.

David Lundy plays Nick, the shy, eccentric archeologist who is no fool. He dashes out for a nip or two before he confronts Jonathan to stake his claim to his wife. Mr. Lundy plays his cards well, as his at first reticent manner becomes more confident and aggressive in his challenges to Jonathan. The undercurrent of distrust and jealousy between the men fuels the increasing intensity of their argument over the painting.

Josie DiVincenzo is outstanding as Patricia, wife, muse, and “sacrificial shiksa.” She transforms herself from the frumpy middle-aged farmwife to the sexy young, self-described “dilettante” artist’s model in the blink of an eye, and never has a false moment. She is completely believable in her ambivalence about seeing Jonathan again, her defense of her choice to stay in England, her anger, and her wistfulness about the freedom of her past. She requires no words to express the epiphany she experiences standing between her rich and famous former lover, and her humble husband.

Constance Caldwell is very good and a bit scary as Grete, the leggy blonde journalist who lulls Jonathan into a sense of security with her praise, and then pounces on him with increasingly aggressive and antagonistic questions. She is every famous person’s nightmare of the Interviewer from Hell, giving no quarter and ever-so-pleased with herself.

Direction is by Founding Artistic Director Saul Elkin. He has chosen his cast well and provides them with room to roam while keeping the production to a tight two hours. Set design is by David Dwyer, whose use of the large canvas floor and backdrop keeps the focus of the audience on the theme of art, while the simple set pieces and subtle music and sounds (Sound Design by Tom Makar) allow for imagination to fill it all in.

This is an excellent production by Jewish Repertory Theatre. It is sad, comedic, and intelligent, with excellent performances by each cast member. The play raises many questions and answers some, but is wise enough to know that in some cases, there are no definitive answers. We have to answer them ourselves as best we can.