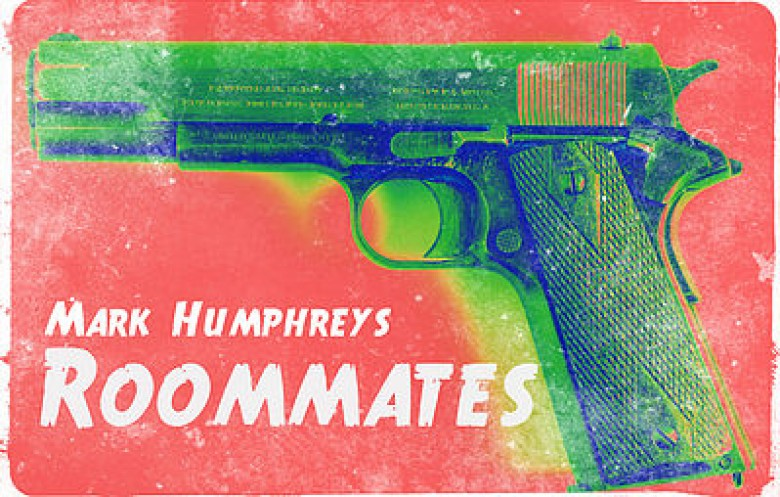 The world premiere of Roommates by local playwright Mark Humphrey opened Thursday at American Repertory Theater of Western New York. This short, three character two act play is a riff on fear, trust, responsibility, predators and prey, the law vs. morality, and the consequences of the choices we make in life.

In the first act, we meet Paul (Michael Starzynski) rummaging around in a small run-down apartment. His phone rings and he lets it go until the machine picks up. He listens to the message from a man named Elliot (Brett Klaczyk) saying he’ll be coming over to see him. Paul frantically packs a duffel, and as he opens the door to leave, a large man dressed all in black that he has never seen before (Victor Morales as Booke) comes into his apartment and sits down on the couch without saying a word. Who is he? Why is he there?

Elliot arrives shortly thereafter, very dapper and well put together in a suit and tie. It seems Paul owes money to Elliot, who has come to collect, and Booke is the thug who will shadow him until he pays. Elliot’s oily sadistic verbal abuse of Paul is jarring, as Paul becomes more and more frightened. The tone of the first act is one of continuous menace toward Paul. As he becomes more and more terrified, we gradually learn the reason for the debt and the terms to repay it.

Act Two takes place 24 hours later. Verbal sparring between Paul and Booke heats up as they engage in conversations about trust, morality, responsibility, and choices made. The themes of the play are developed and discussed. As one example, Paul questions Booke about Rosa Parks refusing to give up her seat to a white man on the bus in Montgomery. Was she justified, even though she was breaking the law? As the men argue back and forth, we learn more about Paul and Booke, their histories, their ethics, and beliefs about themselves and about life. And then Elliot returns…

The discussions in Act Two between Paul and Booke are thoughtful and well written, if at times a bit repetitive, and very much on our collective minds during these difficult political and cultural times. As I watched the two men sparring, I was reminded of the lyrics of a Woody Guthrie song, “As through this world I’ve wandered, I’ve seen lots of funny men; some will rob you with a six gun, and some with a fountain pen.” As these two duke it out verbally, we are reminded of the myriad ways in which people (that would be us) rationalize and justify our dicey, if not dangerous, behavior to ourselves and others, and what the consequences can be.

Mr. Morales and Mr. Starzynski seem to be reaching for lines at times, but are intense and believable in their arguments when they are confident, and Mr. Starzynski’s fear is palpable in Act One. Mr. Klaczyk is very good as the psychopathic Elliot. He feels very dangerous and somewhat deranged, as all good psychopaths must.

And I must mention this because it was a distraction and I notice these things: the slender envelope in the duffel could not possibly have contained that much cash. Fatten it up, folks!

While there are some comic moments in the play, it is mainly a thought-provoking, serious drama with some unexpected and rather startling turns. I will say no more about them.

Direction is by Drew McCabe.