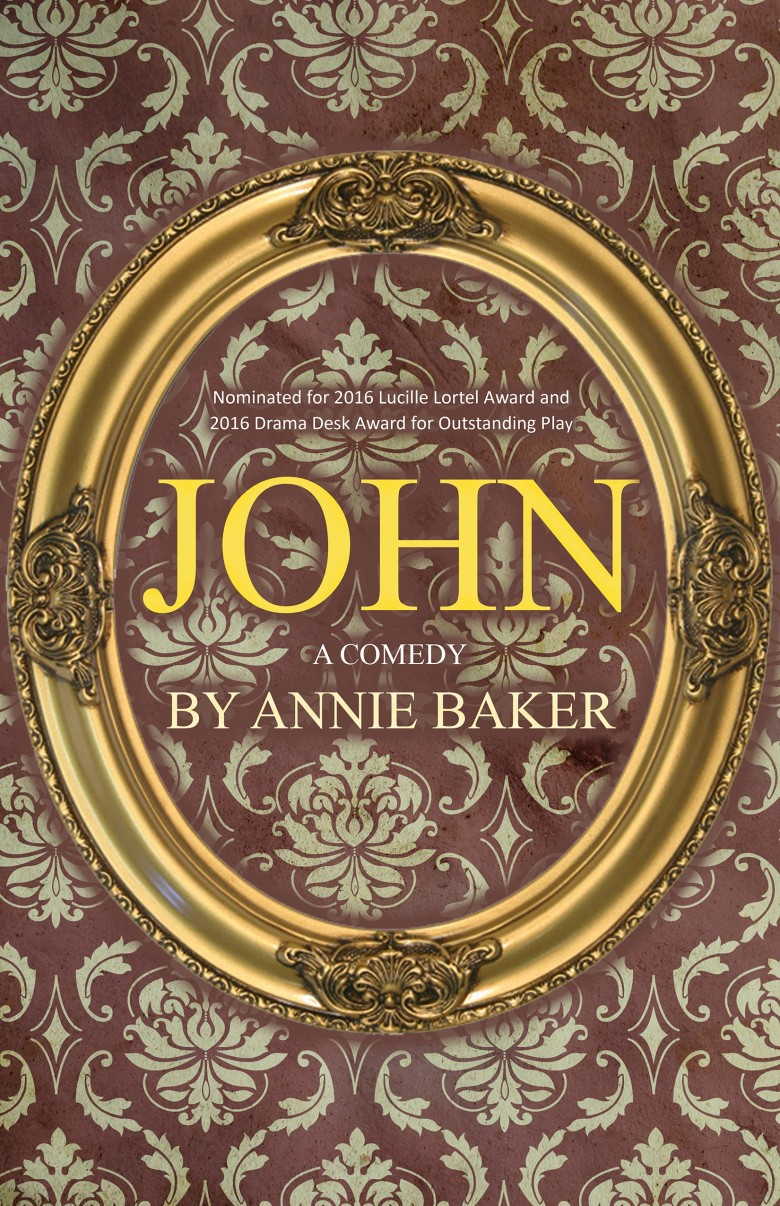 There is nothing fast-paced about John by award winning playwright Annie Baker, Road Less Traveled Theater’s season-opening production. John meanders along with seemingly unrelated conversations, with pauses in sentences, and time delineated by the character Mertis Katherine (or Kitty as many call her) trundling over to a grandfather clock in the corner and slowly moving the hands. Yet, as this three-hour, three-act play unfolds, it is full of surprises, and we are drawn into the lives of the four characters onstage, and wonder about the three we never see.

Mertis (Darleen Pickering Hummert) owns a Bed & Breakfast filled with tchotchkes, a player piano and a Christmas tree, all with minds of their own, and a breakfast area she calls Paris. She is an elderly lady with a blister who shuffles with some difficulty around the downstairs of the B&B. She welcomes Jenny (Sara Kow-Falcone) and Elias (Adam Yellen), a couple in their late 20s, who have come to see the battlefield at Gettysburg, he having been an aficionado of the Civil War since his difficult childhood, and she along for the ride. However, we soon find out that the couple is struggling, and that they hope this trip will be an opportunity to heal the growing rift between them.

The fourth character in the play is Mertis’ blind friend, Genevieve (Priscilla Young Anker). At the beginning of Act Two, the three women sit in Paris drinking wine (Mertis only water, per her diet), as Genevieve tells Jenny that when she left him, her ex-husband John “had taken over my soul and tried to destroy me.” Jenny, looking pensive, says she knows someone named John, too. Hmmm. Genevieve continues with a monologue about how we internalize the criticisms and cruelty of others and make them our own, and what devastation that causes. It is a fine monologue.

However, Genevieve’s monologue at the end of Act Two is even better. It is a great piece of theater, as she addresses the audience directly. She explains how she went mad in stages, listing each one, and then she tells us how she finally became her own person “sitting in the center of my own life.” The language is brilliant and Ms. Young Anker’s delivery is sublime.

The atmosphere in this play is that of things said and unsaid, seen and unseen, natural and supernatural; not menacing, but enough to keep one alert, wondering, what next? Do the flapping bird wings foretell a crisis? Will a creature of some sort appear? Jenny is afraid of the American Girl doll (Samantha) sitting in her little rocker on the staircase. She was sure the one she had as a child was angry about being a doll, and Jenny felt she could never please her. We see how we imbue inanimate objects with our own fears and longings, just as we internalize what others say to and about us. Mertis asks Jenny if she has ever felt “watched over” by an unseen presence. Jenny tells of an experience she had in which she felt “less alone in my aloneness.”

Ms. Baker is a master of realistic dialogue. Through seemingly simple exchanges, she reveals the underbelly of our fears and longings. In an early breakfast scene, Jenny is annoyed by the noise Elias makes as he eats cereal. The tension between the couple gradually builds, and the central issue between them comes into the light. His fears and her defenses are there for all to see.

Each character is well drawn, all becoming people we feel we know and come to care about. Mertis’ rather bumbling, absent-minded persona is given the lie by her graphic descriptions of a sunset in her journal, e.g., “...phosphorescent oranges, grotesque reds, and blasphemous purples slashed open the sky.” Jenny and Elias reveal themselves in their loving moments, as he makes up stories for her, as well as in their increasingly intense arguments. And Genevieve is a fascinating person from the time she takes the stage. I would like to have further conversations with her.

The actors are excellent. Mr. Yellen and Ms. Kow-Falcone reveal the love and the pain of their lives and their relationship, holding nothing back, and without a false note. Ms. Pickering Hummert’s Mertis, while never straying from her slow and deliberate speed, gives a well-rounded performance as the caretaker of the B&B, the history therein, and her never-seen husband, George. Ms. Young Anker is terrific as Genevieve. I love the character and Ms. Young Anker’s interpretation of her. Her voice is grating and lovely at the same time, a feat not easily achieved.

Direction is by David Oliver, who keeps the rather slow pace moving, which may sound like a contradiction in terms. But in John, the silences are integral to the play, so knowing when to have the actors be quiet and when to have them speaking is important, and Mr. Oliver has done that, along with everything else, very well.

More can be said about this complex play, which in itself is a statement about how well it is written by Annie Baker, and produced, directed, and acted by the talented folks at Road Less Traveled Theater. But I’ve said enough. You can see it until October 1st.