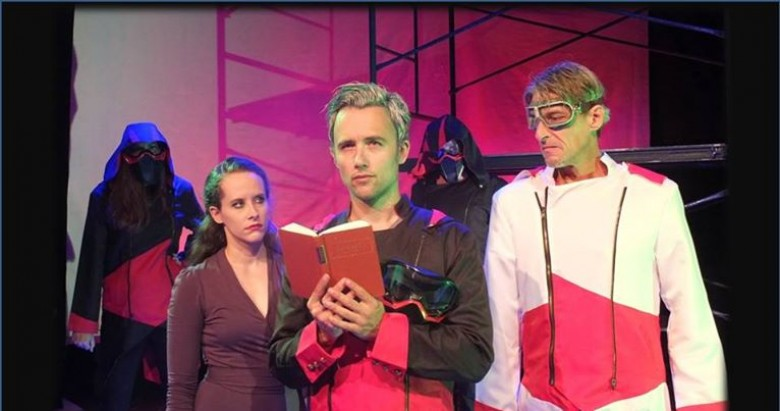 Subversive Theatre opened their season last night with Ray Bradbury’s adaptation of his famous 1953 book and Francois Truffaut’s 1966 film, Fahrenheit 451, the supposed temperature at which books burst into flame. The temperature in the Manny Fried Playhouse was such that the audience may have been in similar danger. As one patron pointed out, “This is the first time I have ever watched a play in a sauna”. It was hot, hot, hot. Luckily, those of us who stayed through the almost two-and-a-half hour performance had programs to use as fans, and as another patron pointed out, “We may all have lost some weight." Always a silver lining. Oh, and the play is well done for the most part. It carries a real sense of menace, and while the dialogue may seem a bit dated at times, having been written pre-Internet, it carries an important warning about the perils of “dumbing down” and trying to control thought, which is just as essential now as it was during mid-20th century McCarthyism, witch-hunts for communists, and the rise of the “boob-tube.”

Co-directed by Gary Earl Ross and Mike Doben with excellent support from their production staff, albeit with some clunky scene changes, Fahrenheit 451 concerns a dystopian future in which reading literature, philosophy, and any other kind of intellectual book has been banned for more than 50 years. Firemen are in charge of burning the books that are discovered, and they have a great deal of power over people’s lives. One such is Montag, played by Rick Lattimer, a young fireman who begins to question his role and his values. He is the acolyte of the Captain of his firehouse, Beatty (John Profeta), who has secrets of his own. Montag meets his lovely young neighbor, Clarisse (Colleen Pine), out walking at night and is drawn to her lightness and sense of freedom, in addition to her other assets. His wife Mildred (Jamie Nablo) takes too many pills and is in thrall to the wall TV screen, becoming part of an interactive soap opera geared toward keeping women from asking pesky questions regarding their vapid lives. As Montag becomes more dissatisfied, Beatty takes him in hand, attempting to make him see the futility of bucking the system. And then…

Rick Lattimer plays Montag with a goodly amount of angst, appropriate for this troubled young man who cares for his silly wife and yet is drawn toward the light that is Clarisse. Colleen Pine exudes just the right amounts of sweetness and determination in that role. John Profeta as Beatty is excellent in a lengthy monologue in Act One that speaks to his own demons and the ones that plague society. Jamie Nablo as Mildred looks very lost and very scared when she isn’t mindlessly watching her soaps. And Jack Agugliaro has a fine turn in Act Two as the cowardly Professor Faber.

Designed by Steve Harter, scaffolding upstage and large screens on each side of the bare stage set the tone for the starkness of life in this oppressive society. Firemen swing down the center pole in the scaffolding and race out to burn books and destroy the people who own them, revelling in the smell of kerosene. Sound and Video Design by Bob Van Valin adds to the menace and inanity of life in this dystopian society. The Firemen costumes by Brenna Prather give a military feel to the work of these enforcers.

There were a few fun bits in this otherwise very serious drama. Clarisse offers Montag an apple at one point. Hmmm. The robot killer hound is called Baskerville, and it is Mrs. Hudson who goes up in flames in a nod to the great detective.

Fahrenheit 451 is not easy to watch for a variety of reasons, not least of which being the heat in the venue rather than the heat on stage. It is a serious look at a serious issue and worth the telling in our troubled times. You can see it at the Manny Fried Playhouse until October 6th.