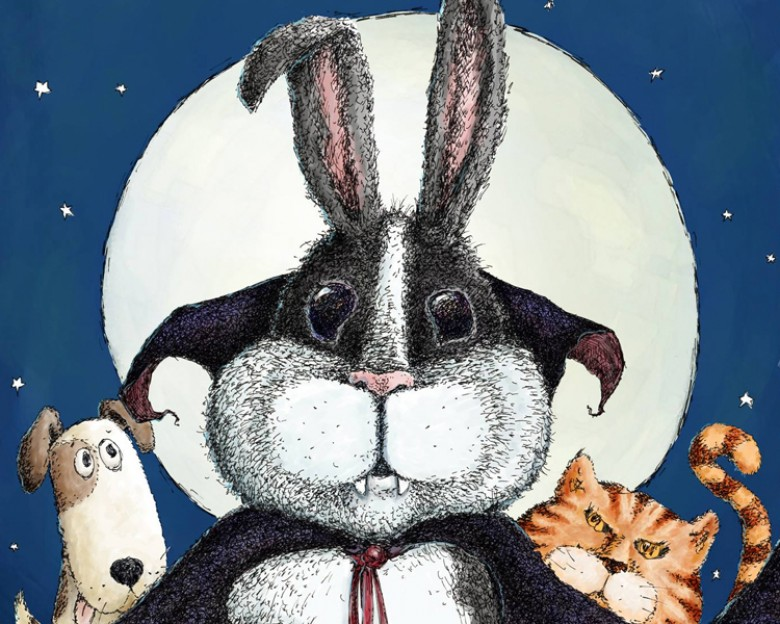 You may have seen Easter bunnies, fluffy bunnies, and funny bunnies, but you have never seen a bunny like Bunnicula, the vampire bunny now stalking the celery at Theatre of Youth. Chester the cat knows what the bunny is up to, but Harold the dog and the whole Monroe family are unaware of the nocturnal habits of their new pet in this charming musical with a message.

Ominous organ music and thunder and lightning abound as Bunnicula enters the Monroe home in a box, and whenever night falls. The set design by Kenneth Shaw is lovely, invoking the feeling of an upscale home inhabited by successful people.

The human family consists of an intense lawyer mother (Jenn Stafford), rather vague professor father (John Profeta), and two tween boys full of life (Tyler Eisenmann and Ayden Herreid). They are like a cartoon family in a good way, coming and going in and out this door and that, sometimes for no apparent reason at all.

The central characters, besides the rabbit of course, are Chester and Harold, who are good friends, each with their own cat and dog-like personalities. Their exchanges are the most fun. They are the story-tellers who also keep us apprised of the goings-on in the Monroe family.

Chester, played by Anne Roaldi, is a typical feline know-it-all with the attitude that humans really are quite stupid. Ms. Roaldi is not a languid, barely willing to move off of the couch kitty, but a literate book reading cat with an intense in-your-face approach, particularly when he discovers the nocturnal wanderings of Bunnicula. How can he convince Harold and alert the family to the dangers that may be awaiting them all?

Harold the dog is a happy-go-lucky pooch, played with goofy sweetness by Rich Kraemer. Harold takes things literally, as when he stares at the wall when he’s told to “watch the house” as the family goes off to the movies. He has a huge heart and loves unconditionally, as all dogs do.

When there is some question about keeping Bunnicula, the family sings that there is plenty of room for all, a message that cannot be overstated at this time and in this place, and one that children of all ages, from 5 to 105, really need to heed.

Christine Cooke-Macvittie is the puppeteer, working Bunnicula’s fangs and red eyes, expertly moving him around the set as he goes about his vegetarian vampire business.

The play ends rather abruptly with the appearance of the Veterinarian. Harold explains to us what she is doing, right before she repeats the exact same words. Very comical.

Kudos to Director Jeff Coyle and TOY for casting a woman in the role of Chester the cat in this male-heavy play. And to the cast for how they explained that women can play men and men play women in the talk-back after the show.

The children in the rather sparse house seemed to me to be enjoying themselves immensely, and were very intrigued by the workings of the bunny in the talkback afterwards. The few I spoke with after the show said their favorite character was Bunnicula. Mine was Harold. But, I’ve always been a sucker for a fun-loving, open-hearted pooch.

You can pick your favorite any Saturday or Sunday at 2:00pm until October 29th at the historic Allendale Theatre.