Exhibit Review: Shape of a Pocket at Squeaky Wheel 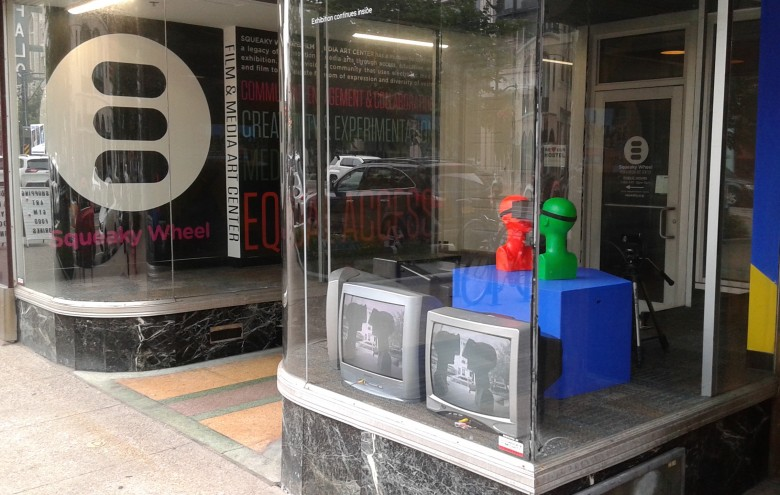 The Squeaky Wheel storefront at 617 Main Street.
- Share this page -

It’s in times of social unrest that art reveals its most essential power — the power to question and provoke in ways that words fail us. Art spaces become agents for public discourse, bringing people together to negotiate our humanity. From now until August 26th, Buffalo’s Squeaky Wheel will be showing a collection of works that not only invite, but require interaction, and our participation becomes a step towards reconciliation, a kind of collective healing. Shape of a Pocket is a multimedia exhibition that explores the concept of social and political resistance and features work by twelve artists currently working in Western New York.

The exhibit is titled after art critic John Berger’s essay of the same name. Berger writes: “The pocket in question is a small pocket of resistance. A pocket is formed when two or more people come together in agreement. The resistance is against the inhumanity of the new world economic order.” This is precisely what the Squeaky Wheel exhibition achieves; it brings together a group of artists who, united in their inquest, become a pocket of resistance. Further, its interactivity is galvanizing, calling upon us to define our own relationship to this pocket.

One of the most playful and provocative works on display is PJ Moskal’s Invaders and can be engaged with from outside Squeaky Wheel’s Main Street storefront. Moskal, an associate professor and director of the Digital Media Arts Program at Canisius College, has designed a video game that passersby can play by accessing a website on their smartphones. The game, which can and should be played by more than one person at a time, requires players to fend off attacking spy drones by lobbing tomatoes. It’s a game of futility, as the drones can be abated if you have enough players to resist, but they cannot be defeated. It raises the question — is the only way to protect one’s privacy is to not engage in the game at all? The storefront is also equipped with a surveillance camera and closed circuit televisions that, at first blush, may compel us to smile and wave at our digital reflections, but upon further consideration, offers insight to the ways in which vanity makes us complicit in the surrender of our privacy.

Inside the main gallery, W. Michelle Harris’s Can’t/Breathe Mirror similarly uses a live video feed that allows the viewer to become part of the work itself. Harris, an associate professor at Rochester Institute of Technology, shows us a perpetually shifting mosaic of tiny, colorful portraits on a video monitor equipped with a webcam that faces the viewer. Step closer to the monitor and you’ll see a highly digitized shadow of yourself imposed over the mosaic. Like Moskal’s surveillance cameras, we fall under the spell of our seeing ourselves in a digital, public context and find ourselves interacting blithely. But upon closer inspection, the portraits in the mosaic depict black Americans — recent and historical — who were killed by the state. The realization, underscored by the presence of electric candles arranged vigil-like before the monitor, is sobering, suggesting the ways in which we are all implicated in the ongoing subjugation of black bodies in America. That, from a distance, the portraits blur into a digitized, hazy abstraction only further argues a collective disassociation with systemic racism in America.

Other artists in the exhibit engage with concepts of space and time. Van Tran Nguyen, a recent SUNY graduate and PhD candidate at Rensselear Polytechnic Institute, superimposes herself over projected historical Vietnamese propaganda posters that depict women in contrary binaries — as the protector and the protected. While Dana McKnight, founder of Buffalo’s Dreamland Arts, imagines a futuristic, black matriarch that speaks only in Morse code, delivering a message about employing the Geechee and Sioux methods of “drum and smoke to confuse the enemy.” Just as its digitized iconic imagery projects a hypothetical future, the work simultaneously invokes the past, recalling Solomon Brown, the black scientist who worked with Charles Morse to develop his coded language. (And what is art but coded language, a subversive and covert form of communication?) Kalpana Subramanian, a PhD candidate at SUNY Buffalo, has created a “soundwalk” that welcomes users to walk through Allentown while listening to a sound collage of field recordings on a downloadable app. Just as Nguyen imposes herself over propaganda posters, Subramanian imposes the sounds of Indonesia, Japan, and India over a Buffalo neighborhood. (Subramanian will lead a guided tour through of her piece later this month. See the end of this article for details.) These works bend time and space — forwards and backwards, near and far — to consider the roles of language, space and identity in times of resistance.

Owing to advancements in technology, we have never before been more equipped to communicate and congregate in opposition to authoritarian rule. Tony Yanick’s Shape of a Packet is a virtual installation that users enter through their smartphones. Yanick has created an ad hoc mobile network, an internet within the internet, that can be accessed within a one-block radius of the gallery. The “packet” contains a variety of media files — sounds, interviews, manifestos — and users are encouraged to upload and share their own encrypted messages, ensuring that the installation will grow and change over the course of the exhibit. (Yanick will be leading a workshop in August on how to create a local network using Raspberry Pi.)

In addition to the pieces on display, the exhibit is accompanied by a 30-minute screening, featuring films by Kyla Kegler, Charlie Best and Jaz Palermo, Morgan Arnett, Jason Bernagozzi, Carl Spartz, and Elisa Peebles. There will be a formal public screening at the close of the exhibit, but private screenings can be arranged upon request.

It’s all too easy to feel despairingly about one’s own powerlessness in times of political instability and social uncertainty. Executive director Maiko Tanaka notes that so many of the exhibit’s pieces invoke the physical body and refers to curator Ekrem Serdar's description of it as “a last resort, that which can gather in numbers, be a little louder, but it is also what can be harmed, that which is at stake.” This is precisely why community is now more important than ever — and Buffalo is lucky to have a flourishing arts scene, populated by artists who are grappling with our shared national anxieties about freedom, justice, and identity. Shape of a Pocket is a powerful, thought-provoking exhibit, serving to remind us that we should not let ourselves be distracted, whether by fear or vanity, from our greatest asset —  the ability to unite and share the ideas that will ultimately shape our future.

Shape of a Pocket runs until Saturday, August 26th. Squeaky Wheel Film and Media Center is located inside the Market Arcade Complex at 617 Main Street, Buffalo, New York 14203 and is open Tuesday Saturday from 12-5. Be sure to attend the following public programs that accompany the exhibit:

Kalpana Subramanian will present an artist talk at Squeaky Wheel, followed by a guided tour of the Allentown neighborhood where participants can explore her locative sound work Dislocations. (Saturday, July 29, 3pm. $10, $7 members)

Tony Yanick will present an artist talk and lead a Raspberry Pi workshop on how participants can build their own local networks. (Saturday, August 12, 3pm. $10, $7 members)

Shape of a Pocket