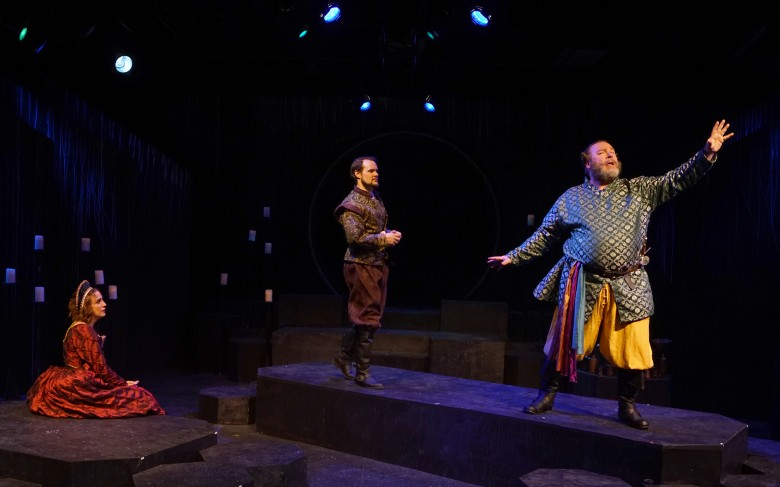 Magic. Illusion. Love. Betrayal. Regret. These universal themes are at the center of The Illusion, adapted by Tony Kushner from L’Illusion Comique by 17th century playwright Pierre Corneille. Comique it is, and full of surprises that amuse and astonish, and it is now playing at Road Less Traveled Theater.

Near a small French town, a well-to-do gentleman, Pridamant, distressed by thoughts of his mortality, walks through the circular entrance to a dark cave in search of the sorcerer/wizard, Alcandre, who can tell him what has become of the son he drove away 15 years earlier. She and her silent servant, Amanuesis, inhabit this mysterious underworld where she conjures up visions—for a price. She agrees to show him what has become of his son and leads him through three scenarios in which his son is living an adventurous and romantic, if somewhat perilous, life.

Mr. Kushner’s language is lush, opulent, and vivid, in keeping with the overheated romantic ideals of 17th century comedies, while maintaining a modern sensibility. So the dialogue, while florid, has a tongue-in-cheek quality that delights. Characters often speak directly to the audience, explaining their motives or desires in this meta-theatrical play.

The magical elements are vital in The Illusion, as they create a mood and feeling of the unknown gradually revealed. Director John Hurley tasked his talented technical crew with creating a cave in which fire appears from nowhere and a portal opens to another time and place. Technical Director Lou Iannone created the fire and portal and other effects that fascinate and add to the fun. The stage (Set Design by Lynne Koscielniak) has a staircase at the upstage entrance to the cave leading down to a series of low black platforms and boxes of different shapes and sizes. Stalactites drip from the sides of the cave. Actors move, dance, or leap from one platform to another while they engage with each other and the audience. Low lighting by John Rickus keeps the cave in semi-darkness during Alcandre’s conjuring, then the stage lights up brightly during the three scenarios. Sound Design by Katie Menke adds to the mystery. Seventeenth century costumes by Jenna Damberger glitter or strike fear, with bustiers aplenty for the ladies. Alcandre’s wizard costume, layered, dark and bejeweled, is stunning.

Lisa Vitrano plays the voluptuous Alcandre with great gusto. Every sentence sounds like a command as she gracefully and forcefully moves around her dark domain, spilling forth the language of magic with tremendous flourishes, calling forth the mystical powers that serve her, and slyly making the occasional snide remark.

Dave Hayes as the narcissistic father, Pridamant, has a deadpan delivery that infuses his role with the detachment one would expect of this very selfish man. Patrick Cameron is eager, sincere, and perhaps also somewhat cynical as Calisto, the son who spouts “dreadful metaphors” in his pursuit of his beloved, Melibea. Cassie Cameron is excellent as his overwrought lover bequeathed to another, flailing about the stage in an agony of love and hate. Sara Kow-Falcone is her servant, Elicia. She also deadpans her delivery, informing the audience of her plans and schemes. Rolando Gomez plays the scary bodyguard/slave Amanuesis to the hilt, with alchemical symbols covering his bald head. Later he is the scary/angry father to Melibea, who has another name by this point. Hmmm. Ray Boucher has the thankless task of being the penniless Calisto’s hated rival, Pleribo, who is also detested by his would-be wife. He does get to be in swordfights, though, which alleviates his suffering as an actor and a character. And then there is Dave Marciniak as the grand lunatic Matamore. He twinkletoes his bulk from platform to platform, while regaling his servant with tales of his warrior exploits and many lovers, all of which are figments of his lively imagination. He is very, very funny.

“The art of love is the blood red heart of the world," Alcandre tells us. In The Illusion, love is treacherous and fraught with peril and disappointment—in a very comedic manner. But is it all real or just an illusion? You can find out for yourself at Road Less Traveled Theater, where The Illusion amuses and astonishes until February 10th.

The Illusion by Tony Kushner