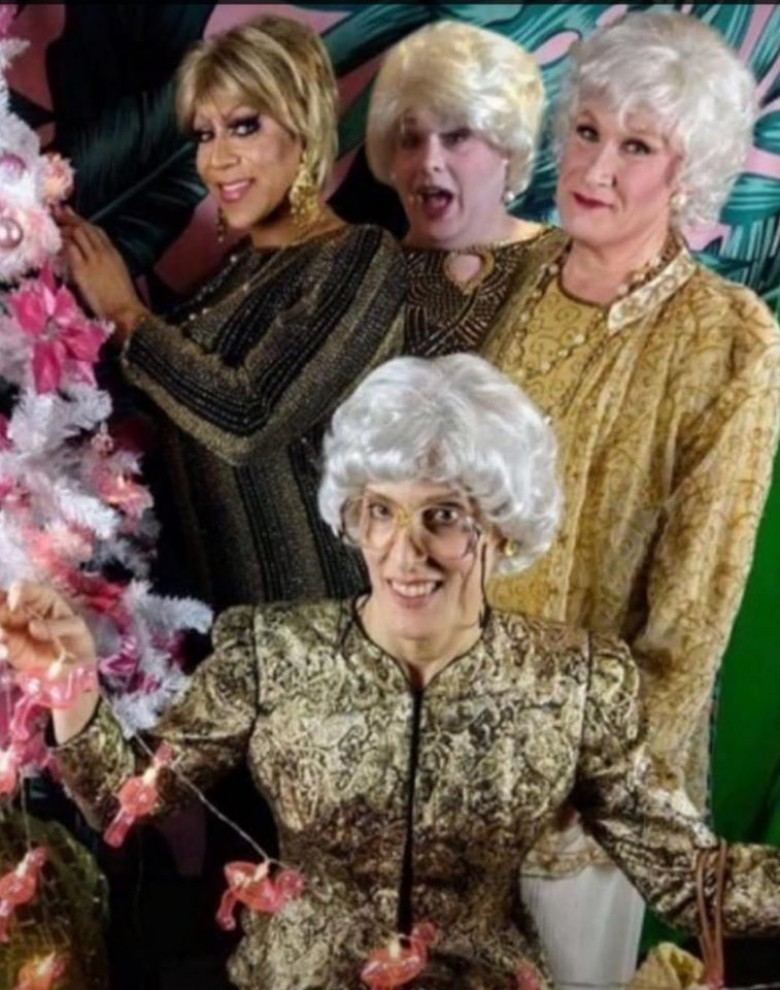 The two lost episodes of The Golden Girls are replete with commercials and trivia and Jeopardy games played with the audience. They are on the tiny stage at the Alleyway Cabaret in a parody of the popular sitcom from the 1980s, written by David Cerda, Artistic Director for Hell in a Handbag Productions in Chicago.

This bawdy version of Dorothy, Rose, Blanche, and Sofia is a little different from episodes seen on TV, beginning with the fact that three of the women are played by men, the language is quite risqué, and a derriere makes an appearance. Parental Guidelines would rate this TV-MA, for Mature Audience Only, although maturity is really a misnomer in this instance, as the show appeals most definitely to our less than mature selves. Sophisticated, it is not. Having a deeper meaning, it does not. Being laugh-out-loud funny at times, ribald, loaded with one-liners and sight gags, it most definitely is.

The show had one issue on the night that I saw it: actors struggled with lines and missed many cues. Their timing was off a good deal of the time, so dialogue that should have been spirited and fast-paced tended to drag (sorry), which is unfortunate because each actor has a very good grasp of their character.

Guy Tomassi plays Dorothy, for whom the playwright has written less wry commentary and given a bit more anger than the original, according to my companion for the evening who is more of an expert on the sitcom than yours truly. He certainly looks the part and has a Bea Arthur air about him that he carries off very well.

Joey Bucheker is very funny as Rose, the dim bulb in the group. His wide-eyed gaze and innocent belief in Santa that is central to the first episode is very sweet and charming. In the second episode, he has the last laugh, which suggests a clever mind beneath that guileless appearance. Chocolate-covered herring balls anyone?

Michael Blasdell is a hoot as Blanche, the southern belle who had 123 lovers, according to one of the Jeopardy answers. His lengthy false eyelashes and spandex/lycra '80s workout gear, including bright yellow leg warmers and sparkly stilettos, are a show in and of themselves in the second episode. He prances and seduces, the campiest one in this camp show. His adlib when a cell phone went off in the front row was hilarious and would fit in perfectly as part of the show. Maybe it was part of the show. Hard to tell with this goofy sendup.

Jessica K. Rasp is Sofia, Dorothy’s 85-year-old mother. She has some great lines and delivers them well. She projects the look and feel of a spry old woman who has been around the block a time or two and has an agenda of her own.

Rounding out the cast, and playing several roles each, are Tim Goehrig, who did such a fine job as Dr. Frankenstein in O’Connell and Company’s season opener, Young Frankenstein, and does a fine job here, and  A. Peter Snodgrass, who is an attorney as well as an actor, according to his bio. He has a great name for an attorney, and a great couple of other qualities germane to the proceedings. Both men seem to be having a lot of fun with their roles, hosting the audience participation parts of the show, as well as playing love interests for the ladies.

Todd Warfield is Director and Designer of this madness. The costumes are very much in keeping with the spirit of the original, with the aforementioned workout gear and outlandish Christmas-themed suits worn by Mssrs. Goehrig and Snodgrass being the highlights. Wigs by James Cichocki add to the actors looking very much like the originals.

The writing is not always as funny as it thinks it is, but the playwright offers so many hilarious lines and situations that in the end, it doesn’t really matter. And when the actors pick up on those cues, this show will be even better than it already is.

Just so you know, only one performance remains that is not already sold out. So, if you are looking for a respite from the rigors of shopping and planning for the holidays, you are a fan of camp, or if you are just a fan of the Golden Girls, as many in the audience were found to be during the games, this is the place for you. A woman named Tracy knew all the answers and took home the prizes. Perhaps you will be lucky enough to win one of those super duper t-shirts, too.

The Golden Girls: The Lost Episodes – The Holiday Edition is in The Cabaret at Alleyway Theatre through December 22nd.

The Golden Girls: The Lost Episodes