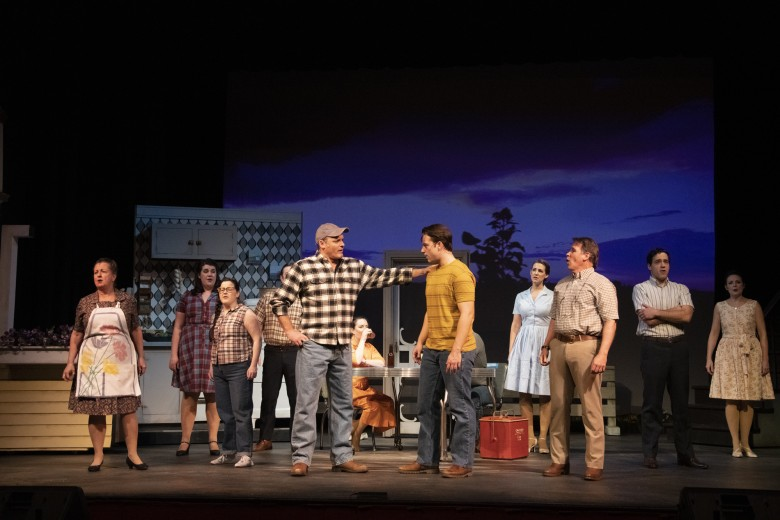 Opening to the sound of a mournful cello and a projection of the Roseman Bridge in Winterset, Iowa, home of the famous covered bridges in the title, Kavinoky Theatre’s excellent production of the The Bridges of Madison County provides an entertaining, at times engrossing, evening of musical theater.

Based on the best-selling 1992 romance novel by Robert James Waller that chronicles four days in 1965 in the lives of war bride Francesca and National Geographic photographer Robert, she a farmer’s wife far from her Napoli home, and he a wanderer, never stopping in one place long enough to connect with other people. The book was a sensation that was loved or reviled, depending on one’s tolerance for indulging in unabashed tragic romanticism ingested with a large dollop of soap. Meryl Streep and Clint Eastwood raised their characters above the material in the movie version, their expertise overcoming the weaknesses in the script that could have turned the movie into turgid melodrama.

The book by Marsha Norman tones down most of the excesses of language in the novel, allowing the lovers to sound more like actual people. Still, the story is basically a soap opera, so know that going in.

Michele Marie Roberts and Steve Copps as Francesca and Robert seem not to care one bit whether they are in a soap opera or a Shakespearian tragedy. They have great chemistry together, very strong voices, and are unflinching in expressing their feelings for each other, physically as well as emotionally (kudos to Director Loraine O’Donnell), feelings that are underscored by their loneliness and longing for passionate love and true intimacy. They lay it all out there, gradually giving in to what they are feeling for each other and becoming more impassioned as their four-day journey unfolds. Their romance feels very real, and they both seem to understand that it is doomed, which makes their plans to run away together more poignant. Given their level of commitment and nuanced performances, particularly that of Ms. Roberts, who has more at stake, the sometimes overwrought dialogue and lyrics hardly seem to matter.

Christopher Guilmet is fine as Francesca’s husband, Bud. As he begins to sense something is amiss at home while he is away with the teenage kids for four days, he sings Something From a Dream, a remembrance of meeting Francesca after the war and an understanding that what he offers her is a far cry from what she needs. His fury when he returns home, sensing a tectonic shift in his wife, is palpable. His character also expresses a prejudice about Italians being “the laziest people in the world.” But,"no offense," he says. That seemed rather jarring, but on the other hand, it is something that people from rural Iowa might very well have believed. Or is that prejudice against rural Iowans? Hmmm...

Pamela Rose Mangus as nosy but kind-hearted neighbor Marge is so much fun. She can get the audience laughing just by walking onto the stage. Her counterpart, husband Charlie, played with sardonic wit by Paul Maisano, is an excellent foil for her eavesdropping and anxious worrying.

Ian Hayes and Arin Dandes play the very whiny and annoying teenage children of the Iowa couple, who more often grate than amuse.

Laryssa Petryshyn has a sexy turn as Francesca’s promiscuous sister, Chiara, who is “on husband number four,” which would have been very difficult in Italy post-war because divorce was illegal there until 1970, and only the rich could afford to pay the Vatican for an annulment. Perhaps she poisoned one, two, and three. (Marsha Norman doesn’t say, but she might have taken the time to learn about Italy’s divorce laws.) In whatever way the men were discarded, Ms. Petryshyn certainly has the qualities needed to acquire them.

The stage is almost bare at the outset, with just two wooden railings and the projected bridge. Designed by Dyan Burlingame, all set pieces and props are brought in and removed in a fluid choreography by the actors. Choreography is by Kelly Copps who also has one song, Another Life, a lament she sings with great sadness as Robert’s ex-wife Marian.

Musical Director Allan Paglia and his band are superb. There are many strings in this one, and they do soar when soaring is required. Inga Yanoski’s shit-kickin’ violin solo on stage is a standout.

Director Loraine O’Donnell had her work cut out for her with this musical, which opened on Broadway to mixed reviews, and closed after 137 performances. With her excellent production team and fine actors, she has created a show that, while remaining a soap opera, is an entertaining and engaging one with terrific performances by Michele Marie Roberts and Steve Copps.

The Bridges of Madison County is at the Kavinoky Theatre through February 2nd.

The Bridges Of Madison County