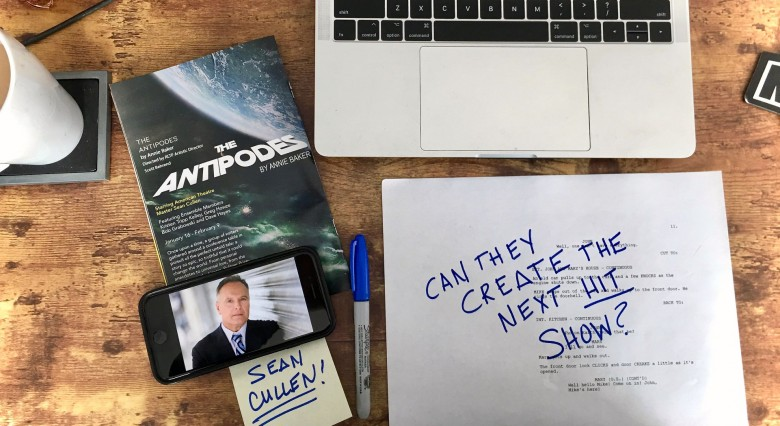 An absorbing play with absurdist overtones, The Antipodes by Annie Baker, is two hours of dialogue about stories—telling stories, having characters tell personal stories and make up bits and pieces of stories—in a fine-tuned production by Director Scott Behrend that stimulates, amuses, and befuddles, as befits a play that begins and ends in the middle. Or does it come full circle, like the uroborus, eating its own tail?

Why are eight people plus an administrative assistant sitting in a windowless conference room for weeks on end sharing personal stories and concocting new ones? Ah, but are there new stories, or only the same stories with new details? How many types of stories are there? Seven: Overcoming the Monster, Rages to Riches, The Quest, Voyage and Return, Rebirth, Comedy, Tragedy, as English journalist (and climate change denier) Christopher Booker posited? Or 36, as Danny M1, aka Flasheroo, suggests in the play (although he could only think of 23 or so). Or perhaps there are 18, many of which are of the void, the night, and the day as wolf-headed, half-naked Brian sets forth in a bizarre ritual in Act 2 while everyone else is asleep? What exactly is going on? And why tell stories at all? Who are the unseen Jeff and Victor? Who or what is the unseen but heard, Max? Will these questions be answered by the end of the play? Ha!

The cast is superb, giving refined performances that delineate each character so well they become like familiar and rather weird friends and family.

At the head of the table and in charge of the proceedings is Sandy, played by South Buffalo native Sean Cullen, a Broadway, film and TV actor, who has returned to his hometown for this production. He is the recipient of the 2020 American Master Theatre award, which he graciously accepted following the show opening night. His Sandy is self-assured and world weary, a leader who has seen it all over many years, articulate and a bit mysterious. He makes one wonder what he is really thinking and how much he knows about the purpose of the project. In a black baseball cap and jacket which he almost never removes, he exhorts and cajoles his team to open themselves up to the process of storytelling.

As the only woman at the table, Kristin Tripp Kelley as Eleanor is subject to misogynistic comments that she handles with aplomb while she knits and eats organic foods. She and Dave Hayes as Dave, who manspreads in his chair facing the audience for much of the proceedings and loves to talk about sex, have terrific facial expressions that are a running commentary on the proceedings. Greg Howze is Adam, yoga practitioner and aptly named as he dreams up a creation story that makes the Snake in the Garden tale seem plausible, and gives a tutorial on the current Kali Yuga stage in Hindu mythology. It is all about discord and strife, which does indeed speak to our times. Adam Yellen is a riot as the afore-mentioned Brian, who is a complete surprise when he steps out of his nebbish-y role as the note-taker and dogsbody to Sandy, the leader of the pack, to become the wolf-headed shaman. John Hurley, in his first acting role in 30 years, nails it as Danny M1, exhibiting a kind of desperation to be accepted and nervously recites his 36, er, about 23 types of stories. Dave Marciniak is excellent as Danny M2, a very nervous, quiet man who is uncomfortable with sex talk and whose stories leave everyone confused. Ricky Needham is also excellent as the nerdy Josh, the newbie obsessed with time who does not have an ID badge and worries he never will. His entreaties to Sarah, the Admin. Asst. go unanswered. Played by Cassie Cameron, Sarah is a saucy young woman who wields a great deal of power. She tells a horror story that she constructs perfectly. It is riveting and wacky.

Scene changes are lightening quick and efficient, barely discernable as the months drag on for the weary storytellers. The set by Lynne Koscielniak looks like any upscale corporate conference room, with overhead lighting, comfortable chairs on wheels and a long table with inlaid wood. The characters rap on the table and wheel themselves around in the chairs in a choreography of people closed in together for a very long time.

The Antipodes captivates its audience with vivid stories, half-stories, horror stories, and weird stories, that often bewilder as well as entertain, told by wholly believable characters. It carries an underlying, almost menacing tension, felt but never spoken, that leaves its audience pondering what it all means.

The Antipodes is at Road Less Traveled Theater through February 9th.