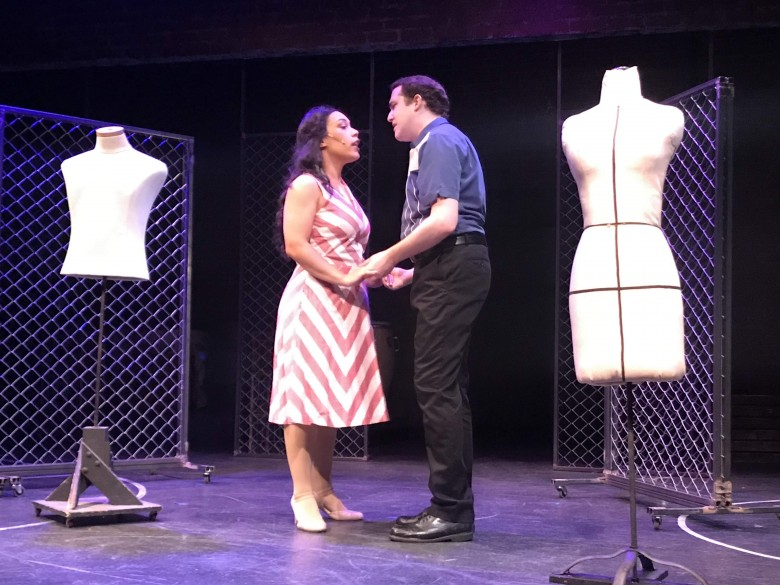 MusicalFare Theatre’s production of the beloved West Side Story is terrific, a great choice to begin their 30th season. Every element in the show contributes to an experience that is intimate, intense and visceral; at once hopelessly romantic and violent in the extreme.

The book by Arthur Laurents speaks to the frustration of disenfranchised youth, the yearning for acceptance and love, and the devastating consequences of racial hatred and unfettered violence as Maria and Tony fall into their ill-fated love, and the Jets and Sharks move inexorably toward their own tragic fate.

Director Chris Kelly, Choreographers Nancy Hughes and Bobby Cooke, Fight Choreographer Steve Vaughan, and Musical Director Philip Farugia and the rest of the crew use their considerable talents to bring these themes to life on the small MusicalFare stage. There is an immediacy to the action and the proximity of the actors to the audience so that, as Mr. Kelly says in his notes, “We begin to feel we’re in the middle of the story.” It certainly felt that way to me opening night. From facial expressions to body language to dance moves to the physical and emotional energy of each actor—everything is up close and very personal.

The choreography by Nancy Hughes and Bobby Cooke complements the brilliant songs by lyricist Stephen Sondheim and the music of Leonard Bernstein. It is powerful and fierce, underscoring the incipient violence and smoldering sexuality in “The Dance at the Gym” that bursts into full-on battle, just as does the brutal fight scene in “The Rumble.” The balletic sequences between Maria and Tony are lovely, deftly woven into their duets. The Puerto Rican women in the satirical “America” strut their stuff, smart and sexy. The comedic “Gee, Officer Krupke” is great fun to watch as the boys climb all over each other, even as the lyrics, while very amusing, highlight the failure of their society to cope with the young men’s restlessness and lack of purpose. Having the actors fly into the audience at times adds excitement to the proceedings. The choreography has energy and verve, is exhilarating, and is very well-executed by the cast.

Dominique Kempf is a wonderful Maria. From her sweet innocence as she longs to break out of her sheltered life and her excitement at meeting Tony, to her fury and despondency at the end, she does not miss a beat. She has a beautiful strong voice that she uses very effectively, and with great feeling.

Ricky Needham as Tony is a tenor with great range. His solo “Maria” is stunning and his scenes with Ms. Kempf are very sweet. However, he does not give the impression of a young man who has ever been in a gang. Even though he wants to leave it, he is a part of the street culture, but nothing in his speech patterns, dress or demeanor indicate that. It may be the Director’s choice, but whose ever it is, I think it causes a certain lack of tension in his attempt to separate from the Jets.

Blaise Mercedes has just the right amount of sassiness as Anita, and her terror when attacked by the Jets is truly heart-wrenching. Alejandro Gabriél Gómez (Bernardo) and Matthew DiVita (Riff) are excellent as the rival gang leaders whose fear and ego push them further into violence. Brendan Didio is very intense as Action and very funny as the hapless hoodlum in “Gee, Officer Krupke.” Rheanna Gallego is impishly goofy as the tomboy Anybodys. The cast of 20 all handle their parts very well.

Victoria Pérez, Co-Founder and Artistic Director of Raices Theatre Company, is the cultural authenticity advisor to the production, making sure the details of Puerto Rican life and language are accurate.

Chris Cavanagh designed the lighting and sound. His sparing use of the strobe light is very effective, as is spotlighting Maria and Tony in the balcony scene.

The five musicians do a fine job with this very well-known music. There was a problem with “America,” as Ms. Mercedes' mike seemed to be malfunctioning. With the musicians onstage for that number, her words were lost—a minor hiccup in this stellar production.

MusicalFare Theatre has successfully brought this huge, brilliant musical to their intimate stage and created an experience not soon forgotten by its audience. Kudos to Chris Kelly, his crew, and the fine actors who perform it so well.

You can see West Side Story at MusicalFare Theatre through October 6th.