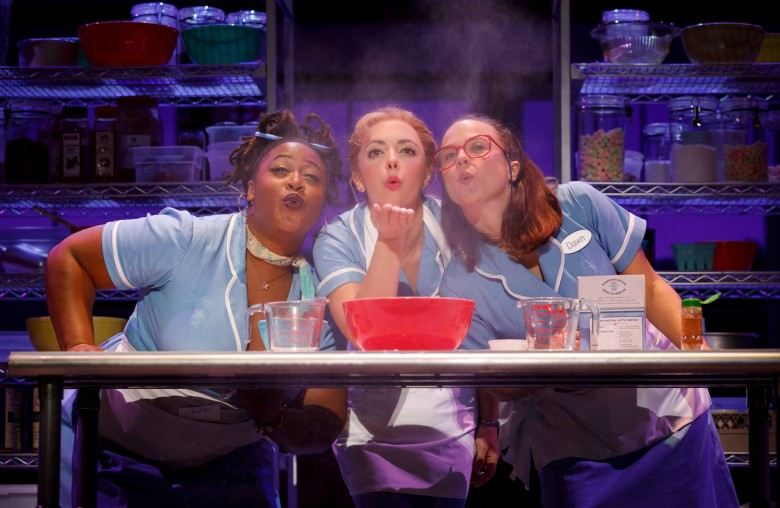 Pie is a dish of many and varied delights. Savor a few tart sliced apples sprinkled with sugar and cinnamon over a light-as-air, flakey crust. Or luxuriate in a complex, deep-dish chocolate whipped cream pie with a moist, crumbly crust. Or dig into a hearty chicken pot pie full of vegetables and cream on a cold winter night. Mmmmm. Sooo satisfying.

While Waitress, at Shea’s Performing Art Center through Sunday, is not as deep a dish as some, it certainly is a dish of many and varied delights that one can relish of an evening – or at a matinee.

Waitress is the serio-comic, sometimes bawdy, always entertaining musical about Jenna, a pregnant and unhappily married waitress and pie-maker extraordinaire at Joe’s Pie Diner. For Jenna, pies are metaphors for the vicissitudes of life, e.g., White Knuckle Pie, Pursuit of Happiness Pie, and Berry the Bullshit Pie. Jenna conjures up new pies and pie names with each change and new experience for her and her co-workers, geeky Dawn and in-your-face Becky, along with fry-cook Cal who suffers from “estrogen asphyxiation,” and owner, crabby old Joe.

The setting is small-town, deep South. The empty highway in the background of the diner tells the tale of the town’s isolation. Much of the music and lyrics by Sara Bareilles has a country flavor in keeping with the town’s hardscrabble existence. And there are lovely, insightful ballads, like Jenna’s “She Used to Be Mine,” in which she laments her situation: “She’s imperfect but she tries, she is good but she lies…she is gone but she used to be mine.” And Ms. Bareilles shows comic flair, as when Jenna and Dr. Pomatter sing about their affair, calling it “a pretty good bad idea.”

The heart of the book by Jessie Nelson is the story of a young woman in an abusive marriage who finds her strength and purpose through friendship, love, and the birth of her, at first, unwanted child. If this story has been told before, it is one that bears repeating. There are many people trapped in frightening, loveless marriages to immature, abusive oafs, male and female. Waitress offers a recipe for escape and, while it is somewhat simplistic, it does contain some of the ingredients people need to make that escape. And Ms. Nelson adds a great deal of laugh-out-loud humor to Adrienne Shelly’s screenplay. For example…

Ogie is the determined love interest of Dawn, as he and the company sing the comic “Never Ever Getting Rid of Me.” Played by Jeremy Morse, he is bust-a-gut hilarious. He has quick little movements and breaks out in weird spontaneous poetry. And he is an amateur musician. What more could a girl who has played Betsy Ross in thirty-two Revolutionary War re-enactments desire?

Desi Oakley is very fine as Jenna. She has a beautiful voice and brings some depth to the role. She worries and frets, talks longingly of her Momma, shows real fear of her husband, and a great deal of joy and confusion in her affair with Dr. Pomatter, played with a kind of goofy sweetness by Bryan Fenkart.

The cast is excellent overall. Charity Angel Dawson, from the Broadway production, played Becky only on opening night. Becky is sassy and kind and has issues with the levels of her breasts. Her number “I Didn’t Plan It” was marred by a shrill microphone, but that did not lessen Ms. Dawson’s range or enthusiasm in singing it. Maiesha McQueen as Nurse Norma is a hoot with her running commentary on the affair between Jenna and the doc.

And our local kindergarteners who plays five-year-old Lulu must be mentioned. We saw Isabella Maritato on opening night. She could not have been more darling. Sophia Vandette will alternate with her, and surely she is just as adorable.

Direction is by Diane Paulus. With choreography by Lorin Latarro, in 2015 Waitress became the first Broadway musical by an all-female creative team, which is both wonderful and sad at the same time.

Waitress is a very entertaining, funny, and fun musical with a heart. And a lot of pies. Many, many pies. And a very good band on stage. Yummy!