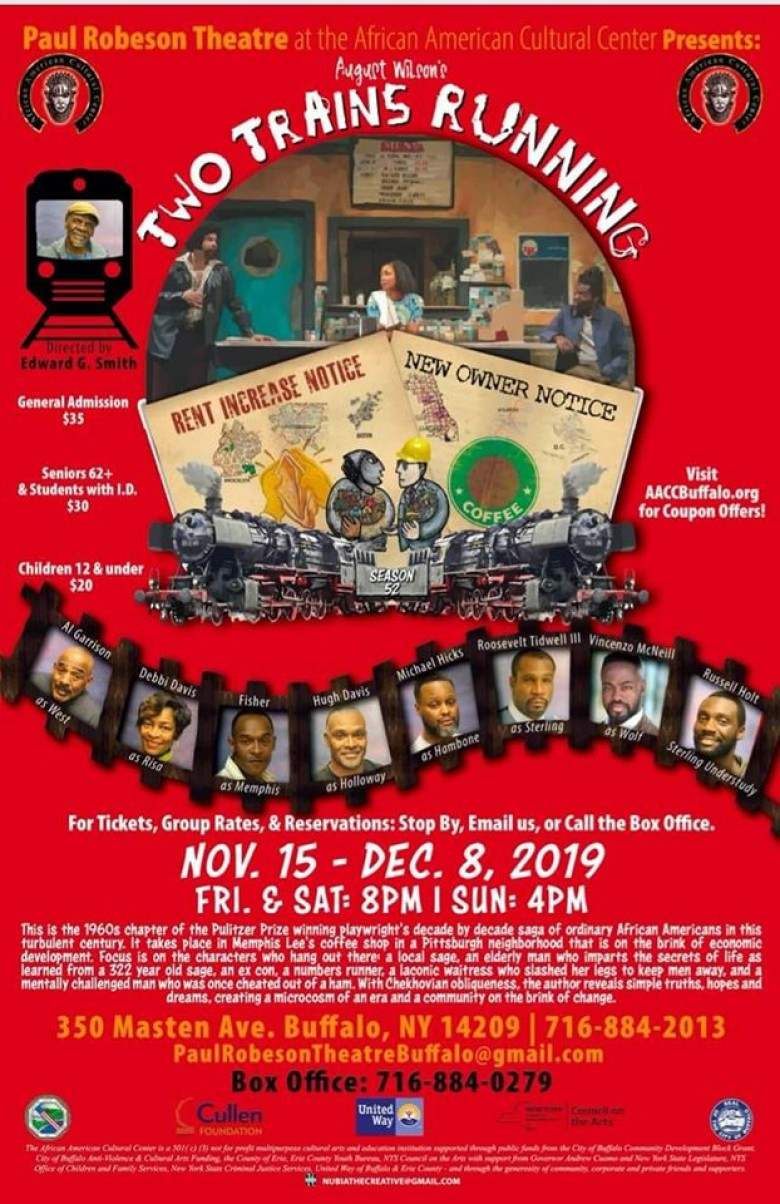 August Wilson creates entire worlds through the characters in his series of ten plays, The Pittsburgh Cycle, which outline the African American experience in the 20th century. Each play takes place during a decade of the century, delineating the challenges and events unfolding at the time, and their effects on the people impacted. Mr. Wilson wanted his plays to “offer white Americans a different way to look at black Americans” through “the poetry in the everyday language of black America.”

Set in a once thriving restaurant that now has few customers in Pittsburgh’s Hill District during the 1960s, Two Trains Running speaks to the upheavals in that formerly prosperous community, due in part to the ubiquitous “urban renewal” of that period, when entire neighborhoods were torn down to be replaced with a civic arena and public housing projects. Poverty, drugs, and displacement were the order of the day, along with political unrest and the rise of the Black Power movement.

Funerals open and close the play, which takes place over a few days. The individual stories of the eight finely drawn characters are very personal, each a microcosm of the Black experience at the time. Always present, but never seen, the shadow of the “white man” hovers over all like a dark cloud that can unleash a storm at any time, raining down destruction and shattering dreams. There is a great deal of humor and wisdom that cut through the seriousness of the play, making these characters very real and a pleasure to get to know.

The actors for the most part are very good in their roles, with the caveat that the pace of the play was very slow opening night, with lengthy pauses in dialogue, causing what should have been three hours with intermission, already a bit of a marathon as is true in most August Wilson plays, to run an extra half hour.

That said, the production captures the intent of the playwright in providing a window into a world that most white Americans never see, in which riffing with language and dry, sly humor are important elements in extended conversations about death and dead people, leaving the South, magic, the changes in the neighborhood, each character’s life experience, and more.

Memphis is the owner of the restaurant in which the play takes place. As played by Fisher, he is a dynamo, ranting and raving about eminent domain and the city government taking his restaurant and how much money he will demand from them. His story about his mule and farm being taken from him is tragic and his delivery is heartrending.

Roosevelt Tidwell III is Sterling, a young man orphaned as a child. Just out of the penitentiary, he is on the make for love and easy money. He brings a certain pathos to the role that underlies his hustling. His love interest is the waitress Risa, played by Debbi Davis. She struggled with lines, did not seem to have a sense of her character, and added no chemistry to the developing romance, although Mr. Tidwell III did his part.

Hugh Davis is excellent as the philosopher and Wilson doppelganger Holloway. He has great timing with sardonic wit and stories about 322-year-old Aunt Ester, the "washer of souls." Vincenzo McNeill does a good job as Wolf, the numbers runner who believes he is a chick magnet extraordinaire. Al Garrison is West, the rich undertaker who wants to buy the restaurant to add to his properties and up his influence with the city government. He has the presence of the rich man among the hoi polloi, but never condescends. Michael Hicks is fine as the developmentally disabled man, Hambone.

Director Edward G. Smith has a fine sense of the characters and the pulse of the play. He did say during intermission that the pace had to pick up. Indeed.

The set by Harlen Penn captures the feel of a restaurant that has seen better days. And a shout out to whoever found that retro, beat-up jukebox. Linda Barr’s costumes have the look and feel of the '60s, right down to the men’s shiny wing-tips.

Two Trains Running is a great play, with lyrical dialogue, brilliant characterizations, and a true feel for the times. This production has all the elements it needs and will do it justice when the pace picks up and the romance develops chemistry.

Two Trains Running is at the Paul Robeson Theatre through December 8th.