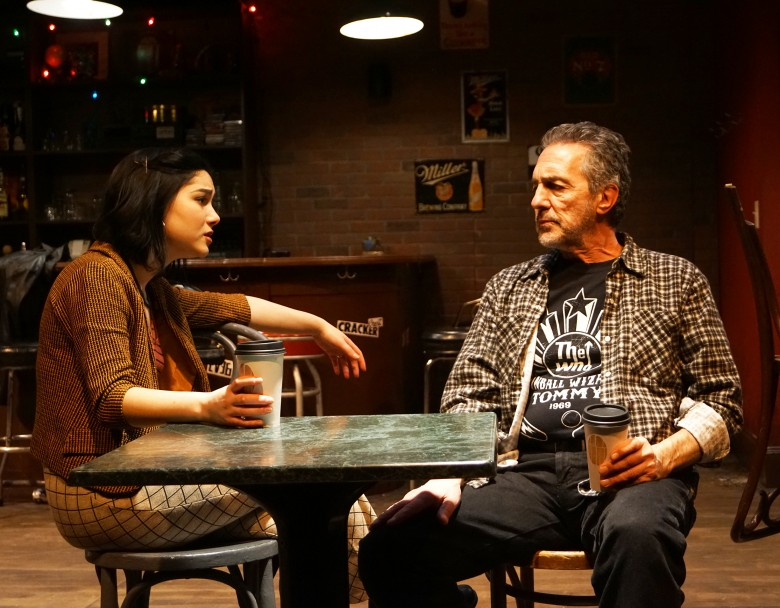 Oh, for the good old days when rock music rocked in the small clubs and taverns where up and coming bands plied their trade, honed their skills, and a few even went on to fame and fortune in arenas and stadiums. Such is the gritty club in Laura Eason’s serio/comic The Undeniable Sound of Right Now, the final offering in Road Less Traveled Theatre’s current season.

Set in a run-down Chicago neighborhood in 1992, for 25 years the club has been a venue for rock bands of all stripes and is legendary in the way of The Stone Pony in Asbury Park. Also legendary is its irascible owner, Hank, who lives for the music and loves it second only to his Gen X daughter, Lena, a spirited young beauty who runs the club with him.

But times they are a-changing. DJs and raves are all the rage with the youth of America, so clubs like Hank’s are becoming that euphemism for old: nostalgic. Hank hates nostalgia. He also hates DJs and calls their spinning “canned, processed and soulless.” So, of course, Lena falls for popular DJ, Nash. Added to that unpalatable fact, Hank also faces losing the club. He has a handshake agreement with the owner whose creepy, predatory son, Joey, is now taking over the business and has designs on the building as well as one of its inhabitants.

As the play unfolds, it develops its themes—the need for each generation to make its own mark and the upheavals that result, the place music has in our lives, and the meaning of family and commitment to who and what you love. It also underscores the importance of getting it in writing.

The set by Dyan Burlingame is so realistic that it acts as a character in the play. You can almost smell the beer and feel the sticky floor under your feet. Bottles and red plastic glasses are strewn all over. Colored lights twinkle behind the tacky bar. The tiny stage where all the magic happens has vinyl and cymbals on the wall with microphones and amps crowding it. Ragged posters adorn the walls. It feels grubby, welcoming, and like it has many a tale to tell.

Christine Turturro is terrific as Lena. She feels real and honest in her love for her father and in her youthful excitement about the possibilities for bringing the club into the '90s. She is comfortable with vulnerability, and fearless when the need arises.

Peter Palmisano’s Hank is a passionate and angry man, sarcastic and loveable at the same time. He has great timing with his sardonic remarks, and his discomfort with softer feelings is tangible. His monologue about his love for Lena reveals his passion and his limitations with fervent honesty.

Playing the part of Hank’s ex-wife and Lena’s step-mother, Diane DiBernardo brings a kind, earthy presence to her role, while letting it be known that she has seen a thing or two in her life.

Johnny Barden is very good as Nash, the DJ who loves Lena and then faces the quandary of career vs that love. He has the energy of a young man excited about life and anxious to make his mark, as he so clearly exhibits in his face-offs with Hank.

Jeff Coyle plays Toby, the club barback. He has a delightful monologue about his name being a turn-off to the ladies. However, at times he seems uncomfortable in his role, not quite inhabiting it yet. And Nick Stevens as the oily Joey often seems over-the-top, almost like the evil landlords in the Perils of Pauline. However, when he speaks of his relationship with his father, his hurt and frustration are very real and touching.

Director David Oliver has assembled a very entertaining evening of theater. The Undeniable Sound of Right Now, a slice of generational shifting through the medium of music, is realistic in its tone, unsentimental, yet warm and funny.

You can see it at Road Less Traveled Theatre through May 19th.

The Undeniable Sound of Right Now