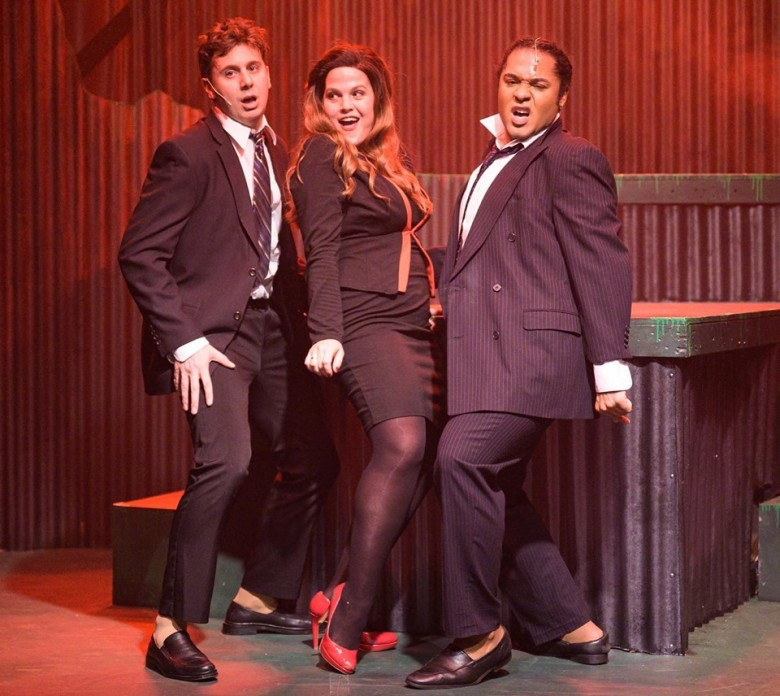 His mission? To clean up all the toxic waste in the world, well… at least in New Jersey, and to win the heart of fair damsel, the luscious, lascivious Sarah the Blind Librarian.

Does he succeed? That is for those of us lucky enough to have seen this hilarious, silly, bawdy, yet still very sweet musical opening night to know and for you to find out.

Is Toxie an absolute riot in the person of Steve Copps? He is. No spoiler here, but his mask and body suit, courtesy of Lindsay Salamone (who is also Costume Designer) and Jacob Albarella, is a knockout, and he prances around in it like the dweeby kid who was just asked to the prom by the Homecoming Queen. He also manages to convey vulnerability, fear, rage, and deep, deep love for said fair damsel without being able to move a single facial muscle.

Is Copps also an absolute riot as Melvin Ferd the Third, the nerdy, nerdy geek who is turned into the mutant freak? He is. His first appearance as Melvin before he speaks a word, is laugh-out-loud funny. Then he speaks, and the laughter goes on and on.

Is Bethany Burrows as the delicious Sarah the Blind Librarian an absolute riot? She is. She never wavers in her stare into the middle distance, whether stamping the desk instead of the books, fighting off ruffians, seducing Toxie, delivering outrageous lines, pouring tea, or dozens of other activities.

Is Jenn Stafford as Mayor Babs Belgoody/Ma Ferd) an absolute riot? She is. She pulls off one of the funniest bits, and she has many, of being two people at the same time, and lets everyone know just how exhausting it is. Her Mayor is a dragon-lady-without-remorse, sexy in an S&M nightmare kind of way, and her Ma Ferd is every son’s nightmare of a disappointed mother. There is even a song called “Disappointment” that she sings to Toxie with Professor Ken and the Doctor.

Speaking of them, as played by Raphael A. Santos (Black Guy), and Dylan Zalikowski (White Guy), are they absolute riots, too? They are. However, each man plays many parts, and they are also an absolute riot. They are Sluggo and Bozo, dim thugs in the pay of the evil Mayor; Sarah’s best friends, Shinequa and Diane; and many more. Santos as Professor Ken is the unwilling but unable to resist recipient of the Mayor’s advances so that he will spill about Toxie’s kryptonite. Will he succumb? You betcha. Zalikowski plays guitar in the character of an absurd, long-haired Folk Singer who belts out “The Legend of the Toxic Avenger” like Willie Nelson on steroids. Again, there is more, much more, and all of it deliciously funny.

Are the Book by Joe Dipietro and Lyrics by he and David Bryan an absolute riot? They are. One-liners like “croissants is French for bagels,” or “lesbianic folk singing,” and paraphrasing, “If blind people aren’t attracted to ugly people, who will be?” are but a few of the throw away lines that are scattered throughout, and never stop coming. And who could resist songs titled “Thank God She’s Blind,” “Evil Is Hot,” or “Hot Toxic Love”?

Does a neon green floor, a puke green 55-gallon drum with toxic goo draining into it, and polluted air courtesy of a fog machine give the feel of an environmental disaster? It does. Strobe light, gunshots, and a hellacious roar by Toxie all add to the fun courtesy of Set, Light, and Sound Designer Chris Cavanagh.

Does the music by David Bryan, under the direction of Allan Paglia, add to the drama and fun? It does.

Are the wigs by Mary McMahon almost characters in themselves? They are.

Has Doug Weyand, Director and Choreographer, assembled and helmed a creative staff and group of actors who are at the top of their game in an absolutely hilarious musical that races along like a house afire, or in this case, a toxic-dump afire? He has. Is he at the top of his game? He is.

Does Second Generation Theatre Company have a hit on its hands? It does.

Should you go see it? You should, and if you do, you'll leave a happier person.

The Toxic Avenger is at Shea’s Smith Theatre through November 10th.