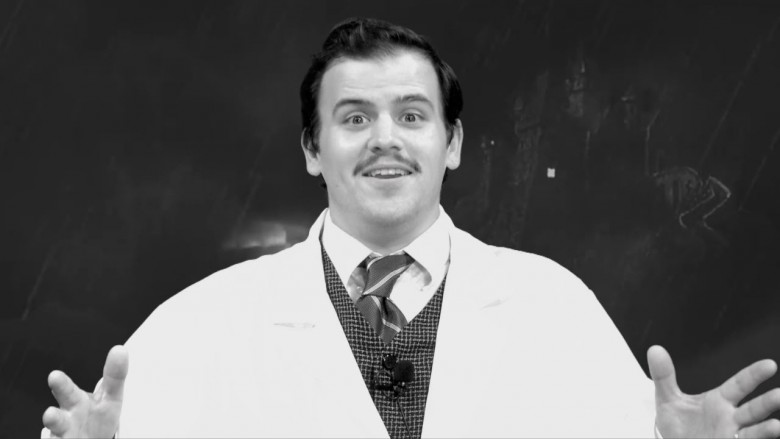 Mel Brooks is the Emperor of Irreverence. Not a person, place, or thing is exempt from his madcap, often bawdy, seldom subtle, almost always broad, sense of humor. His and Gene Wilder’s 1974 movie, Young Frankenstein, a black and white comedic parody of horror films of the 1930s, is 13th on the American Film Institute’s list of the 100 funniest American movies. In other words, it is no slouch in the laughs department. And neither is Brooks’ and Thomas Meehan’s adaptation of it as a musical with the unwieldy title, The New Mel Brooks Musical: Young Frankenstein. Lyrics are by Brooks.

O’Connell and Company chose the musical as their first offering in their new home in the Ken-Ton Commons for its nostalgia value, according to Executive Director and Founder Mary Kate O’Connell. The Ken-Ton Commons is the former Philip Sheridan Elementary School, closed since 1982, now repurposed for senior housing, a day care center, gymnastic company, and various businesses to become a community hub. O’Connell and Company are housed in the former school’s auditorium, a nostalgic place for many in the community, and are excited to be a part of this forward thinking enterprise.

As for the musical, it is silly, goofy, and funny. The addition of songs and a few changes to the script from the movie might be considered gilding the lily to fans of the original. Adaptations from film to stage can be problematical, particularly when lines, characters, and actors associated with them, are as well-known as is the case here. There was some criticism to that effect when it opened on Broadway in 2007. O’Connell and Company were undaunted by this and have taken on the task with tongue firmly in cheek, and a willingness to be silly, goofy and funny in true Mel Brooks style.

Our hero is serious scientist and American grandson of the notorious Dr. Frankenstein, creator of the reanimated monster that terrorized villagers decades earlier in Transylvania. He must go to the village to settle his deceased grandfather’s estate. Engaged to a woman who disappointingly prefers not to be touched, he leaves on board a ship expecting to return to her soon. Upon his arrival he is met by Igor, he of the wandering hump, and introduced to the delectable Fraulein Inga. They repair to the castle in a hay cart and are met by the formidable Frau Blucher. Finding his grandfather’s laboratory and medical journal, the current Dr. Frankenstein has a tinge of the old man’s madness underneath all that intellectual rationality and decides he can do a better job of reanimating dead tissue. And then…

Timothy Goehrig fits very nicely into the role of Dr. Frankenstein, his earnest and rigid demeanor gradually slipping into mad doctor mode, and then loosening up with the help of Inga, played by the lovely Jenny Marie McCabe, whose perkiness and beautiful voice are a delight. Joey Bucheker is a hoot as Igor, the grandson of the original, who has his ancestor’s unfortunate tendency to drop brains. Pamela Rose Mangus plays Frau Blucher in deadly earnest. John Kreuzer is the monster with the large_____. Vanessa Dawson is fiancé Elizabeth, who has an encounter with the monster’s large_____ that changes her forever. Nicholas Lama is Inspector Kemp, his prosthetic arm an homage to Dr. Strangelove. John May is the Hermit with a huge shiny grey beard.

Some musical numbers are parodies of famous songs. “The Brain” in scene one sounds ever so much like “There Is Nothin’ Like a Dame” from South Pacific. Frau Blucher sings “He Vas My Boyfriend” surrounded by Kit Kat Club dancers from “Mein Herr” in Cabaret. Vaudeville plays a big role. Bits from famous movies abound. There is even a barbershop quartet. The cast handles these and more with aplomb. The tap dance sequence in “Puttin’ on the Ritz” is great fun to watch. Choreography is by Tara Scime.

The New Mel Brooks Musical: Young Frankenstein is a pleasing diversion from the cares of the day, week, month, or past three years, whichever you might need to be diverted from. There is not a serious moment in it. It does not try to be meaningful in any way. It is pure silliness, and as it is almost Halloween, the timing for a comedic parody of monster movies is just right.