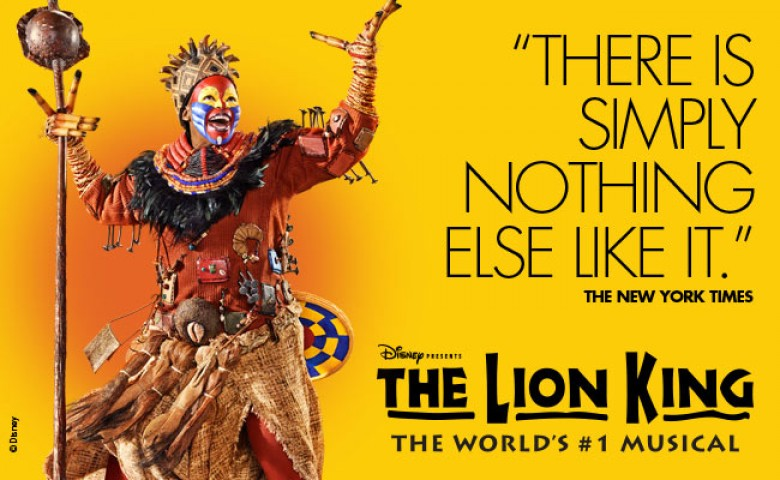 The Lion King roared into Shea’s Performing Arts Center this week in a sublime production that is brilliant from the first sound of the pounding drums in the boxes on either side of the stage, to the fabulous African beasts making their entrance down the aisles, to the final triumphant scene when the curtain is lowered.

This is my first experience of The Lion King, either on film or in the theater. I felt like I was 10 years old again, having an “awesome” experience in the true sense of the word, never having seen anything like it before. I was enthralled from the opening “Circle of Life” with “Nants’ Igonoyama” sung by Rafiki, the shaman-mandrill played by the incredible Buyi Zama. How could anyone not be? The imaginative genius of the masks and puppets alone make this a unique experience. They are as tiny as a mouse and as large as an elephant. There are antelope and wildebeests, amazing giraffes, hyenas, and more. Then add the stunning African rhythms and choreography by Garth Fagan in this 20th anniversary production, directed by Julie Taymor with an energy, passion and humor that is compelling and delightful, as well as dramatic and sometimes frightening, and you have an evening of theater that will never be forgotten by those fortunate enough to experience it.

African mythology and folklore bring us the story of Simba, the lion cub who would be king, and the challenges he faces when he is manipulated into exile by his jealous uncle, Scar, played with sarcastic malice by Mark Campbell. His father, Mufasa (Gerald Ramsey), commands the stage as the lord of Pride Rock and all that the eye can see. He is a true King, compassionate as well as masterful. Young Simba (played by either Joziyah Jean-Felix or Ramon Reed) is right there with them in acting and singing abilities, as in “I Just Can’t Wait to Be King.”

Major comedy arrives in the person of Greg Jackson as Zazu, the hornbill majordomo, aka, major dumbbell, fussing and fretting. Nick Cordileone as Timon the meercat and Ben Lipitz as gassy Pumbaa the warthog, add to the hilarity as the protectors of the boy Simba in exile. And then there are the three hyenas, Shenzi (Martina Sykes), Banzai (Keith Bennett), and the dim-witted Ed (Robbie Swift), in thrall to Scar, and who can never quite get the meal they want, until the last. We also see the predators and their prey on the savannah where all the animals live in the circle of life. The lionesses hunt antelope, the buzzards circle, and the hyenas feed on their kill. There is no whitewashing of the circle of life here.

The actors are excellent in their roles. I mentioned Buyi Zama as Rafiki. Let me mention her again. Wow! The dancers are superb. Even with the greatest choreography, if the dancers are not up to the mark, the show lags, which definitely is not the case here. They are wonderful, flying around the stage as the flora and fauna of the savannah. “One by One” at the opening of Act 2 is perfection, a Zulu dance whose high leg kicks I remember seeing performed many years ago by Ladysmith Black Mambazo. It is beautiful to watch.

The deeper messages of The Lion King--that we all need to take responsibility for our actions, that we are all connected, that life and death are inextricably intertwined, and so importantly, that those we love are always with us--takes the production beyond spectacle. It is magical, the very best that theater has to offer.

Take yourself and those you love to experience this extraordinary musical between now and January 7th if you possibly can. You will be glad you did.