Review: The Kindness of Strangers 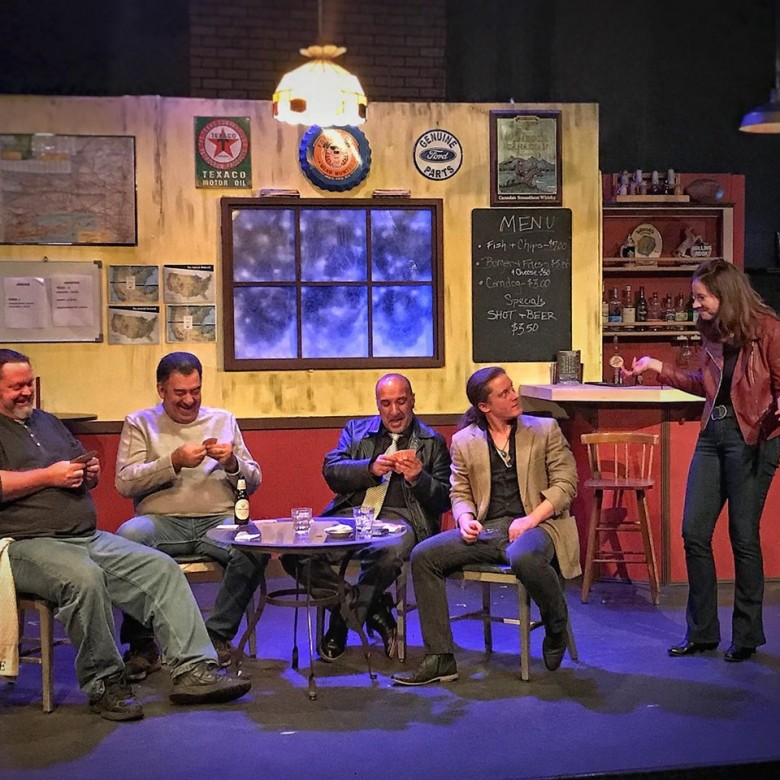 The inaugural production of Navigation Theatre Company, The Kindness of Strangers tells the tale of four people in the late 20th century stranded by a snowstorm near a town that holds no joy for any of them. Taking shelter in a bar next to the train station since train service has been halted, roads are closed, and all they have are each other, the bartender, alcohol, some old magazines, and a deck of cards to while away the hours, Peter, Frank, Jackie and Linda each have a story, and as the night progresses and the drinks flow, their stories are revealed, along with their fears, dreams, and losses.

Mr. Humphrey explores moral ambiguity through the characters of Peter (Monish Bhattacharayya), a porn film producer, and Linda (Suzie Hibbard), personal assistant to faded movie star, Jackie (Timothy Coseglia). He is the object of a scandal regarding the death of his ex-wife, a hit and run crime that has never been solved that becomes the focus of the characters’ interactions. Frank (Victor M. Morales), in a last-ditch effort to be important in some way in the world, makes the decision that sets up a discussion about law vs. morality, (a theme that was also explored in Mr. Humphrey’s three character play, Roommates, that premiered at ART of WNY two years ago). John F. Kennedy plays Billy, the bartender who often silently watches over the proceedings but takes in more than he lets on.

The dialogue is at times Mamet-esque, with that military-precision cadence in a conversation between two characters. Mr. Morales is adept at these riffs, a particularly witty one being his explanation to Jackie about limitations that nature places on human desire, i.e., they are all stuck until the storm passes, like it or not. On the other hand, a story Billy tells about a drunk and a dog would have been more amusing with fewer words more quickly imparted.

Direction is by Matthew La Chiusa, who also designed the set and lights. The actors move freely around the stage, not seeming to be moving just for the sake of it, but with some purpose. Dimming one area of the stage while some characters speak in another area works well. The set has the feel of a funky bar that caters to travelers as well as locals, with old signs on the wall and a raggedy loveseat with old magazines on a table. The bar is called Mulligan’s. Hmmm.

The Kindness of Strangers runs under two hours with intermission. It is an engaging script and the production makes good use of the large stage. It could be even better with some tighter dialogue and more even acting but is a pleasurable evening of theater that raises questions about morality that are being played out on the world stage every day.

The Kindness of Strangers is at The Compass Performing Arts Center through November 16th.

The Kindness of Strangers

Days: Thu, Fri, Sat
Days: Thu, Fri, Sat
545 Elmwood Avenue BUFFALO, NY 14222
The Kindness of Strangers, a new play by local playwright Mark Humphrey, is about a chance meeting of strangers in a bar, who are forced to make the best of being stuck there. Over the course of…
- Share this page -