Review: The Killing of a Chinese Bookie @ Torn Space Theater 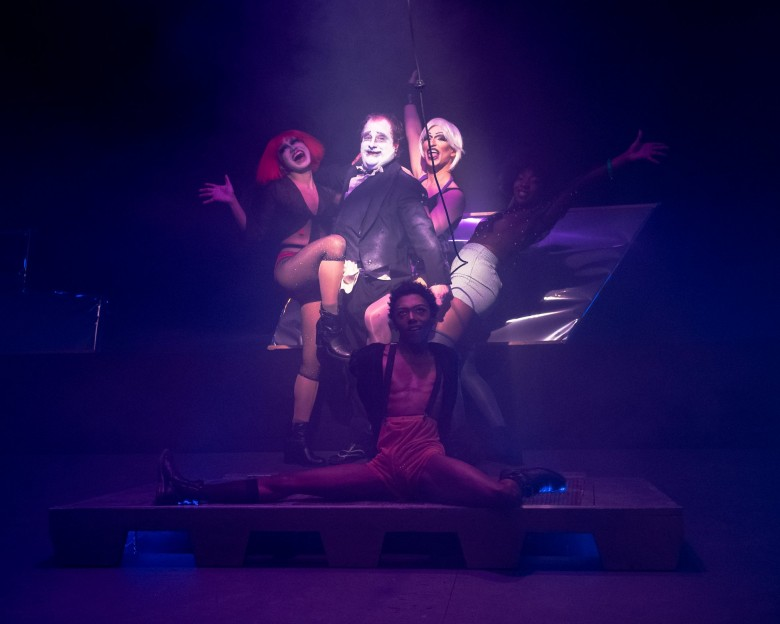 When Cosmo Vitelli steps out onto the floor to welcome the audience to his nightclub at the opening of The Killing of a Chinese Bookie, the air is shrouded in fog and a seedy-looking curtain is drawn across the stage behind him. One hand is in his pocket and the other is holding a glass of whiskey. He is wearing a tacky satin shirt under a grey suit, the comb-over on his balding head shining in the lights. On a raised platform stage left, the MC stands at a microphone in filthy black tails, his shirt poking out from his pants, his face distorted by greasy clown makeup, his hair plastered to his head. Near him is a woman wearing very little. They all converse, and the curtain is opened onto The Crazy Horse West, Vitelli’s strip club on the Sunset Strip in 1976 Los Angeles.

This is the opening few minutes of Torn Space Theater and Director Dan Shanahan’s miasmic journey through the underbelly of a medium that is already the underbelly of a culture that promotes sleazy sexuality as a panacea for the loneliness and desperation of its participants and clients.

Independent filmmaker John Cassavetes’ 1976 noir gangster film has been adapted for the stage by Torn Space. It tells the story of Cosmo, an independent nightclub owner whose whole existence is his club and his girls. While celebrating after repaying a debt, he gambles his way into another debt with the mob. To pay it off, he is tasked with killing who he is told is a Chinese bookie. His world inevitably begins to crumble as he has been set up by the mob to kill a powerful man. The stage adaptation maintains the story line while exposing the “truth” of loneliness and desperation behind it all in a surrealist dream.

Stan Klimecko is Cosmo and he is marvelous as the small-time club owner. Instead of just another creepy guy thinking he is about something, Mr. Klimecko offers up a man who carries his heart on his sleeve in his love for his club and his girls. He imbues Cosmo with a sweetness that surprises given the world he has created for himself, while at the same time he is clearly subject to the pitfalls of that world.

As for creepy, Chris Brandjes as the MC shines in that department. He is the super-creepy Mr. Sophistication, a talentless clown who sings “I Can’t Give You Anything But Love, Baby,” while the girls gyrate around him. I doubt I’ll ever hear that song again without being reminded of his unsavory rendition.

The burlesque girls are men in drag, except for Rachel (Gabriella McKinley), Cosmo’s girlfriend. Kalub Thompson, Fab Fabia and Matthew Rittler are made-up to look like android versions of strippers, their makeup extreme and their movements robotic, as if bored beyond hope by their jobs and their lives. Carmen Swans, Victor Morales and Gary Andrews Stieglitz round out the fine cast.

The set is by Kristina Siegel. The bare, interconnected 2 x 4's look like a skeleton that is open to expose the soft vulnerable tissue within, in this case the lives of people who inhabit a lonely, painful and unforgiving world. In his director’s notes, Mr. Shanahan speaks of personas and illusions, characters in “desperate need of improvisation…constructing their reality, tearing it down, rebuilding it…” The set is the physical manifestation of that construct.

The Killing of a Chinese Bookie is an intense 80-minute production by Torn Space Theater in which the elements of theater are expertly used to create a surrealistic vision of a dark, lonely world.

The Killing of a Chinese Bookie