Review: The Book of Mormon @ Shea's 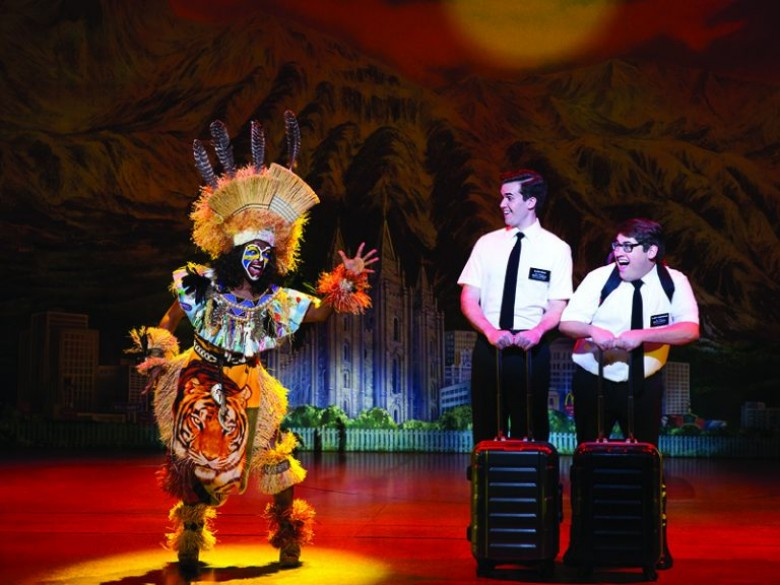 Oh, to be a young Mormon missionary, fresh-faced, gung-ho, top of the class, suffused with the faith and fervor of the true believer. Such is Elder Price, all of 19 years old and ready to take on the world—well, Disneyworld anyway. He is excited to be on his way to the foreign land of his dreams…Uganda. Wait…Uganda? Warlords, poverty, AIDS, deadly giant bugs? Not Florida? Not his beloved Orlando? What is God thinking?

Such is the confusion and disappointment faced by the young elder in the riotous, irreverent musical, The Book of Mormon. Adding insult to injury, the elder with whom he must partner is the hapless, chubby, confabulating, sci-fi/fantasy nerd, Arnold Cunningham. According to Rule 72 of the missionary code, the two must always stay together, no matter what. But Elder Price will not be daunted. In his paean to his own narcissism, “Mostly Me,” he declares himself ready to “blow God’s freaking mind,” and so their adventure begins.

The Book of Mormon, Book, Music, and Lyrics by the South Park duo of Trey Parker and Matt Stone, and Robert Lopez is over-the-top funny and is about as irreverent as it is possible to be. It is decidedly sacrilegious, yet has a kind and compassionate message. Its humor is never mean-spirited, but always sharp and oh so X-rated. Talk of sex with various appropriate, inappropriate and wildly unlikely beings abounds and bodily functions play a major role. Do not bring the kiddies.

The production numbers are great fun. “Hasa diga Eebowai” (you’ll have to see the show for the translation as it will not be printed here) speaks to the Ugandan villagers’ sense of powerlessness over their circumstances and what they think of the Almighty. “Turn It Off” sung by the very gay Elder McKinley, speaks to the necessary repression of feelings if one is to be a pious Mormon, or for that matter a pious Christian or Muslim or Jew. Tap dancing is involved here, which is always a plus, and in a perfect world, would be de rigeur in any musical. “Man-up,” Arnold’s coming-into-his-own number that closes the first act has disco lights flashing everywhere in the theater. One of my favorites is “Spooky Mormon Hell Dream,” with red devils and skeletons holding large maple glazed donuts tormenting the terrified Elder Price, while historical bad guys hover. However, for pure unadulterated hysterically funny satire, the Ugandan’s re-enactment of the Mormon creation story, “Joseph Smith American Moses” tops them all. Frogs play a big part in this one.

Liam Tobin as Elder Price has a perfect blend of youthful enthusiasm and cluelessness and packs a mouthful of pearly whites that he displays with great pride. Colgate would pay megabucks be able to use him in commercials. Jordan Matthew Brown exhibits all the nebbish-y qualities of Arnold, idolizing his partner Price, displaying his lack of self-esteem, then digging deep inside to come up with some really great lies. Kayla Pecchioni is the lovely Nabulungi, sometimes known as Neutrogena, among other names. She is a delight in her sweet innocence, texting away on her portable typewriter. Her song, “Sal Tlay Ka Siti,” while very funny, is overlaid with a longing for peace, prosperity and love. In smaller, but no less well played roles, are Mike McGowan as the baritone warlord, General ************, Andy Huntington Jones as the repressed Elder McKinley, and Jacques C. Smith as the village leader, Mafala.

The Book of Mormon zings along from one farcical hilarious situation to another, seldom stopping to breathe. The cast excels. The production is almost seamless. The production values are first-rate—costumes and lighting sparkle, the actors’ words are clearly heard—with the exception of a minor, early issue quickly rectified. The choreography is lively and the dancers are great. The dialogue and songs are outrageous and laugh-out-loud, side-splitting funny.

This is my second time around for The Book of Mormon, and I found it just as hilarious as my first foray into the" Africa that is nothing like The Lion King." How can you not love a show that places Jesus, Yoda, Genghis Khan, and Jeffrey Dahmer on the same stage?

You can see it at Shea’s through May 5th.

The Book of Mormon

646 Main Street Buffalo , NY 14202
This outrageous musical comedy follows the misadventures of a mismatched pair of missionaries, sent halfway across the world to spread the Good Word. Now with standing room only productions in London,…
- Share this page -