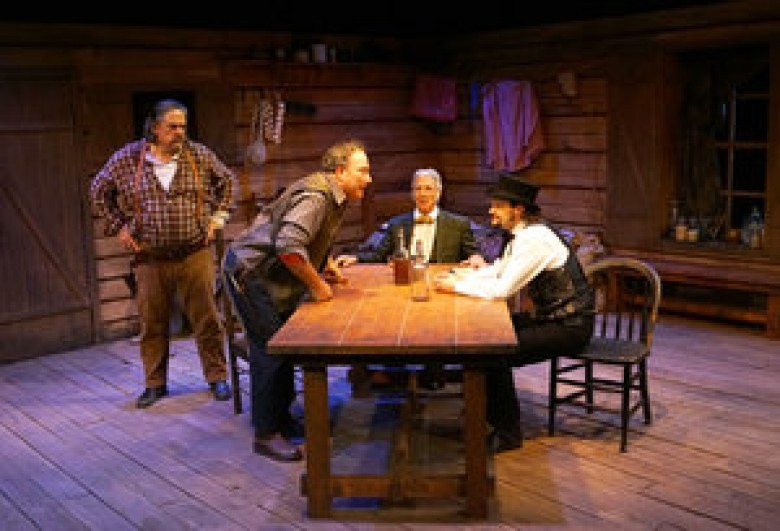 Kill. Killing. Killer. Killed. These four words are spoken well over a hundred times in the season opener at Road Less Traveled Theater, The Authentic Life of Billy the Kid, an early play by A Walk in the Woods author Lee Blessing. The premise is that Billy was not killed by Pat Garrett but lived for many years after his supposed death and meets up with Garrett again.

The known facts are that William H. Bonney, at age 21 an outlaw and known murderer, was shot and killed on July 14, 1881, by his former gambling and drinking buddy, and now sheriff, Pat F. Garrett, in Fort Sumner, New Mexico. However, legends that Billy survived grew and several men claimed to be him over the years.

The play takes place on February 28, 1908, on a failing ranch outside of Las Cruces, New Mexico, where resides the broke and boozing Pat Garrett (Daniel Greer) in an old cabin. With a gun and bottle for company, he sits and hallucinates the Kid walking through his door. The man who does walk through his door one dark and stormy night is elderly writer and collaborator on his book about killing Billy, Ashmon Upson (Peter Palmisano), who has a surprise for Pat in the person of the not dead Billy (Dave Mitchell). Is he really Billy and will the men agree to go on a tour planned by Ash in one last attempt to hit the big time and make money? They are to re-enact the death scene wherein Pat did not really kill Billy. As Ash says, “It doesn’t have to be the truth. It’s History!”

As the play progresses and the men drain bottle after bottle, they talk about other things besides killing, e.g., legacies and making money in this short and yet somehow also long play, but killing is what interests them the most. Who was killed when by whom? Who will be killed now? Will the killing be done with a knife, a rifle, or a six-shooter? In this otherwise excellent production, the script is stretched very thin. It works well in exposing the underbelly of the Wild West myth and presenting the “legends” as tired, middle-aged alcoholics. But the dialogue is repetitive. Ash takes an inordinate amount of time to get to the point of his visit, and the Kid and Garrett go back and forth so many times about whether they will work together or kill each other that the initial tension between them becomes tedious. The arrival of Jim P. Miller (Patrick Cameron) in Act 2 brightens things up a bit. He is a young dandy from Texas who may buy the ranch. He comes on as an early 20th century fanboy, delighted to be in the presence of his western heroes, gushing over his luck.

The four-man cast is excellent. Each character is fine-tuned. Kudos to them and to Director Scott Behrend.

Daniel Greer’s Garrett is morose, angry, and paranoid. He does not so much as crack a smile. His long hair is unwashed, his clothes ratty, and his countenance dour. He gives off the sense of being disgusted with himself and the world, but still clinging to his past fame.

Dave Mitchell plays Billy as the psycho he no doubt was, full of himself, pushing his chest out, brandishing a huge knife, an evil smile on his face while he boasts about killing 21 people in 21 years. He is a creep and becomes even more creepy the more he drinks.

Peter Palmisano as the elderly Ash visibly ages as the evening progresses and his hopes for one more payday fade. He scampers around at first, spry, eager to seduce Garrett into agreeing to his plan, full of ideas and excited about his surprise, but his energy drains away as the men bicker and threaten each other, and he becomes a tired old man, hope gone and almost out of time.

Patrick Cameron, youthful and full of life, is counterpoint to the others. Here is someone whose sees his life as still full of possibilities. Laughing in wonder at the goings on around him, he then joins in with them in a rather bizarre scene as a potential assassination. He looks and acts very threatening, and one begins to wonder if he really is who he says he is.

Dyan Burlingame’s set is perfect. With rough wooden floors and walls, and a large table in the center, the cabin is chock full of western ranch pieces. Ropes hang from the wall, an antler sits on a shelf, a butter churn stands in a corner, coats hang on hooks next to the wooden door, a large hearth dominates one wall, and a single bed sits in a corner. It has the look and feel of a rustic old western cabin.

Lighting by John Rickus and Sound by Katie Menke meld together in a very impressive thunder and lightening storm that lasts throughout the evening, startling the audience and Garrett sitting at his table at the beginning of the play. The red lights during the stop-action scenes highlight the fear and tension in the cabin.

Costumes by Jenna Damberger underscore the personality of each of the characters–Ash in a shiny suit, befitting a professional who has seen better days; Billy in suspenders he can stick his thumbs under to push out his chest; Garrett in a plaid shirt and jeans a ranch hand would wear; and Miller in the fancy black western suit, white shirt and brocade vest of a wealthy man.

Director Scott Behrend has put together a fine cast and production crew. Everything about the production shines. If only that script were tighter.

You can see The Authentic Life of Billy the Kid at Road Less Traveled Theater through October 6th.