Review: Tales of the Driven 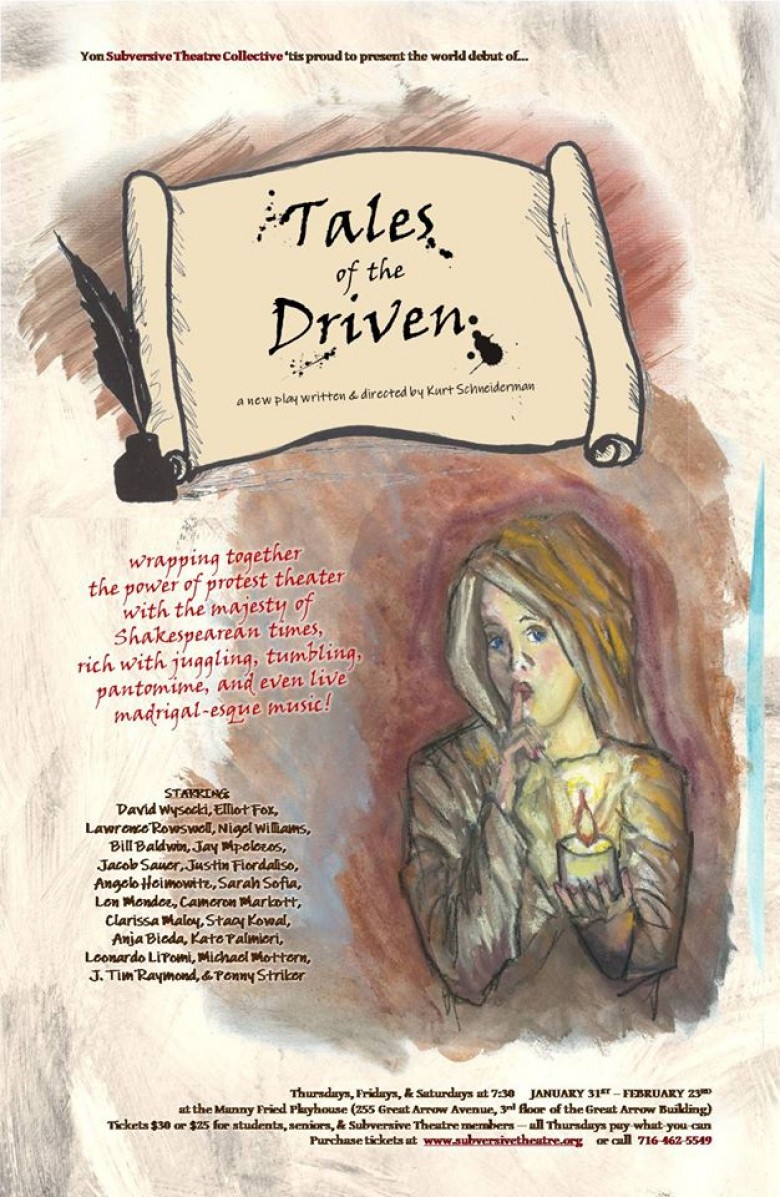 Tales of the Driven is the premiere of a play written and directed by Subversive Theatre founder and Artistic Director, Kurt Schneiderman. On its website, the theater quotes Bertolt Brecht: “Art is not a mirror to reflect reality but a hammer to shape it.” Hammering is pervasive in this play, so in that sense, it is very much in keeping with the theater’s mission.

Set in Elizabethan England, the story centers around a young boy whose older sister had recently died under mysterious circumstances, having drowned in the river. In the opening scene, backlit behind a translucent screen, a blacksmith pounds a hammer onto an anvil, the harsh metal-on-metal sound presaging the cruelty and brutality that is to come. The man behind the anvil is the rageful, abusive blacksmith father of the boy and his sister.

A ragtag troupe of actors, acrobats and jugglers arrive at the forge and beg for the smithy’s services, as their wagon has broken down on the road. He refuses to help them as they have no money to pay him with. The local priest arrives and makes the decision that the troupe will perform at the church service on Sunday and says he will pay handsomely for their services. Which play the troupe performs, who performs it, and the consequences of that choice are catalysts for solving the mystery of the daughter’s death and determining the fate of the boy and his father.

The hammer pounding the anvil is an apt metaphor that sets the tone of the play. There is little that is subtle or understated in this two-hour production that speaks to economic, political, social, and religious injustices. By crowding the script with so many different issues, the play tries too hard and has too many threads—the evils of private property, child abuse, the greed of the church, unequal distribution of wealth, fear and rigidity in the working class, pedophile priests, etc. It leans toward being a polemic rather than an entertainment that enlightens and engages. However, there is an entertainment in there, and a good story and mystery that could still express the political views of the writer with editing and less use of that hammer. Clever dialogue is scattered throughout. I liked “Ode to the Overwrought” and the definition of a thespian—"French for unemployed." There are also some sweet intimate moments between the boy and Orion, played by David Wysocki, who acts as the voice of the playwright. And there are two terrific acrobats.

Sara Sophia and Jay Mpelezos are the excellent acrobats. In one scene she stands on his shoulders and walks back and forth from one shoulder to the other. Very impressive. Mr. Mpelezos also plays the mime, Cygnus, and is fine in that role, as is Ms. Sophia as the dead sister, Cassandra.

The boy is played by fourth-grader Nigel Williams in his theatrical debut. It is a tricky part, as he is an abused child that loves his father and who also possesses wisdom beyond his years. Young Master Williams does a fine job with this role, although it was sometimes difficult to hear him over the various sound effects.

The play seemed under-rehearsed, which may be due in part to this week’s blizzard. Some actors in this large cast were reaching for lines and there was a general feeling that a few more rehearsals would have smoothed out some of the rough spots.

Tales of the Driven makes some important points about contemporary issues in addition to presenting an interesting story and mystery, but is hampered by an overwrought script and uneven acting. It is at the Manny Fried Playhouse through February 23rd.

Days: Thu, Fri, Sat
Days: Thu, Fri, Sat
255 Great Arrow Ave Buffalo, NY 14207
The world debut of...Tales of the Driven Written & directed by Kurt Schneiderman*Starring David Wysocki, Elliot Fox, Lawrence Rowswell*, and many others A tribute to the power of performance as a…
- Share this page -