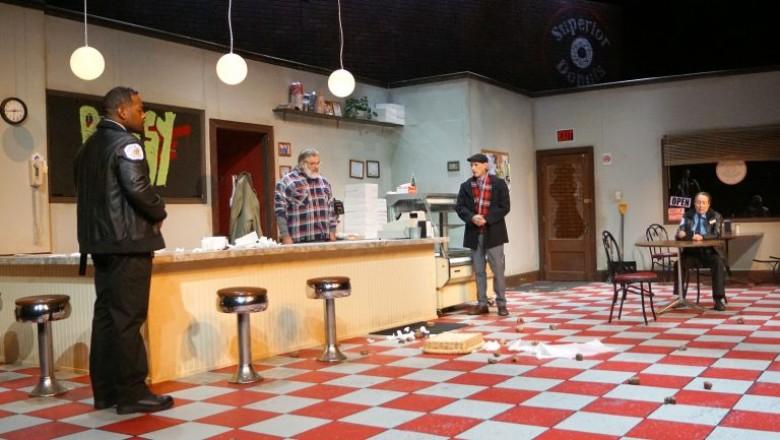 Arthur Przybyszewski (the “P” is silent, thank you very much) has retreated so deeply inside of himself that he barely interacts with the world around him. In Tracy Letts’ witty, insightful, and ultimately life-affirming character-driven play, Superior Donuts, a Road Less Traveled production playing at Shea’s 710 Theatre, his world is confined to the donut shop his immigrant parents opened 60 years earlier in what is now a neighborhood in transition in Chicago, the bank, and home. Arthur, with his scraggly beard, scruffy clothes, and ponytail, is practically mute after years of guilt and depression over his life circumstances and the choices he has made. “Life,” he says, “is derailment.”

Into Arthur’s self-imposed isolation steps—or rather barges—an upbeat young African American man who answers his ad for help in the shop. In desperate need of work, Franco has his own demons, internal and in the form of a petty gangster named Luther. Also in the mix is a tough lady cop with an eye for Arthur, an old alcoholic woman, and a Russian immigrant storekeeper who wants to buy the donut shop to expand his vision of an electronic empire. As the old Polish hippie and the young Black man with a dream spar over race and updating the shop, they surprise themselves with their growing affection for one another, retreating back into themselves when feelings become too painful, and then for Arthur gingerly, and for Franco, sometimes boldly, venturing out again.

Tracy Letts, an actor as well as a playwright, won the 2008 Pulitzer Prize for his play August, Osage County, a blistering marathon devoted to family angst. Superior Donuts, from 2009, is a kinder, gentler, and mostly quieter peek into the hearts and souls of ordinary people, extraordinary in their own ways. He can capture the essence of a person’s life, often in just a few sentences, as when Officer Randy talks about her tough Irish family upbringing and what it has meant to her.

Steve Jakiel inhabits the depressed Arthur in his speech patterns, practically forcing the words out, as if the effort to speak at all is more than he can manage. His shuffling gait and shoddy appearance add to the sense of his being a man to whom life has become a burden and talking to people a terrible reminder of his failures. But then, every once in a while, when Franco is particularly optimistic, he allows a modicum of enthusiasm to glint in his eyes or in a quick movement of his head. His soliloquies between scenes about his parents’ frightening history, his early life, and how the Vietnam War affected him and his relationship with his father, are very effective. His sense of pride in his family, and sadness about his own choices are understated, as they would be by this very insular man, but evoke those feelings in the audience nonetheless.

Jake Hayes is excellent as Franco. He revels in sunny optimism, which he clearly knows is often mere bravado. He cajoles Arthur and challenges him, wheedling and needling him to get back into life. They have great timing as they attack, parry and riposte, like fencers in a bout. He is very believable as the smart young man who hides his gifts, and he does a great impression of Stevie Wonder.

John Profeta’s Russian entrepreneur Max is sometimes more caricature than character. He plays the role very broadly, particularly during the drunk scene in Act 2. But he can be very funny and adds a bit of menace in his desire to purchase the donut shop, the hatred between Poles and Russians going back many centuries. Lisa Vitrano as Officer Randy tells her entire story with just her facial expressions. One wishes her part were larger just to be able to watch her silently steal scenes when she is on stage. Dave Hayes is oily and threatening as the sociopath with an ulcer, Luther. His sidekick Kevin, played by Johnny Barden, looks and acts like a 1950s hood in a movie. Tina Rausa as the decrepit Lady, does not look decrepit enough, but is very good as the crone who knows about parents and children. Gabriel Robere as Officer James looks great in his Star Trek tights and is very fine in his role of a dedicated policeman. And Dave Spychalski is sweet as the gentle Russian giant, Kiril.

The donut shop set, designed by Diane Burlingame, has the look and feel of an old shop, a bit tired, everything old fashioned but still functioning, more or less, except for the clock, which has stopped—like Arthur. The realistic traffic and winter winds that enter every time the shop door opens are by Sound Designer Eric Burlingame. Lighting is used to excellent effect in the scene changes, a spot being on Arthur while the background is barely lit. Fight Director Adam Roth has choreographed a lengthy altercation that, after the initial attack, looks very real. Costumes are by Maura Price.

Directed by Lucas Lloyd, this is a very engaging and enjoyable production of Superior Donuts, a play set in Chicago, but that could very easily be set on the East side of Buffalo. It speaks to the comedies and tragedies of ordinary life. At times laugh-out-loud funny, the redemptive power of friendship, love, generosity of spirit, and willingness to act are on full display as the antidote to a life in which hope has become just a four letter word.

Superior Donuts is at Shea’s 710 Theatre through October 27th.