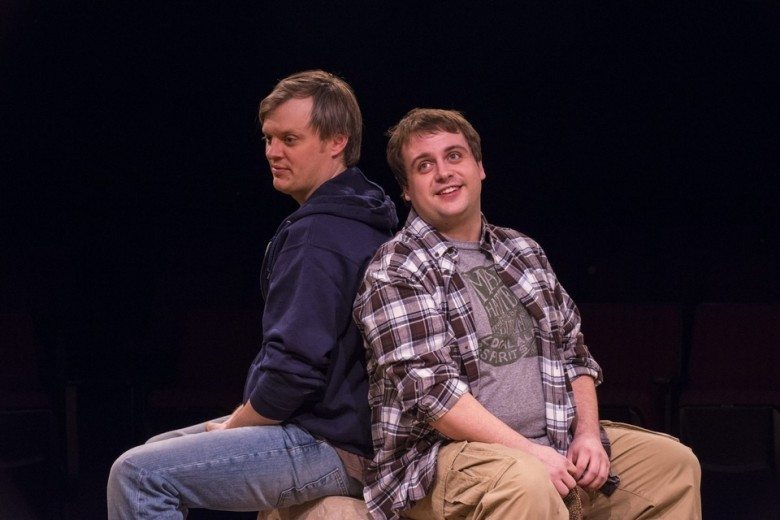 "No one goes to the movies to feel depressed - that's what theatre is for!"

Charlie (Kevin Craig), a recent transplant from America finds himself as an extra on the set of a Hollywood film being filmed in a rural southern Ireland village in County Kerry.

Armed with big dreams, a healthy appetite for pie and a screenplay of his own, he befriends Jake (Chris Evans) - a local also recently returned from a stint stateside.

Along with several other villagers, the play's central characters are enjoying the spoils of the Hollywood production in the way of free food and a generous "40 quid a day" pay for their work. Things get interesting when the film's lead actress - a self-absorbed American starlet, begins to take interest in Jake.

The novelty of the movie set begins to wear thin and the sudden tragic death of a local teen causes tensions between the movie producers and a village in mourning. Old memories come to surface and our amiable duo of Charlie and Jake are forced to face some hard truths as they contemplate life and their futures.

The story is deftly told with quick scene changes, flashbacks and a total of 15 characters played by the extremely talented two-man cast. Kevin Craig as Charlie Conlon received his BFA in Theater Studios from Niagara University in 2008 and has appeared in Julius Caesar at Shakespeare in Delaware Park. Chris Evans as Jake Quinn makes his ICTC debut after recently moving to Western New York. A Virginia native, he has appeared in several production in the NYC and DC/Maryland area.

Craig and Evans were perfectly cast and well directed by Christian Brandjes who makes his directorial debut at ICTC. Mr. Brandjes is an associate Professor of Theatre at Daemon College that has performed extensively in regional theater, most recently in School for Husbands at ICTC. The transitions between characters was always with good pace and the actors stayed in sync playing well off each other's energy.

Written in 1999 by Belfast-based actress and playwright Marie Jones, "Stones in his Pockets" is the winner of two Lawrence Olivier Awards and was a nominee for the 2001 Tony Award for Best Play. As I have come to expect from every ICTC production, the set, lighting and sound for "Stones in his Pockets" is so well done as to transport the audience off to Ireland's County Kerry right from the very first scene.