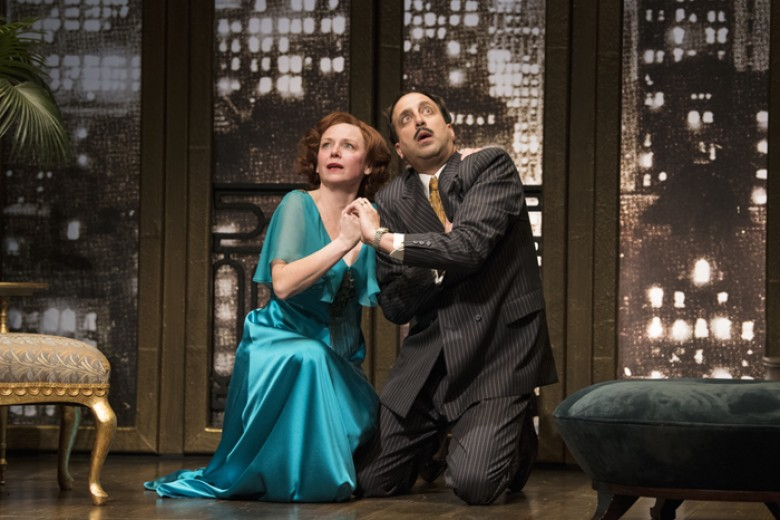 Is a kiss ever just a kiss? Does every kiss have meaning? Can a kiss in the present be so charged that it propels the couple into a shared past so passionate and painful that all the time in between feels like a dream? What about funny kisses? Bizarre kisses? And most importantly for the show now at the Royal George Theatre, what about stage kisses?

In the delicious backstage comedy by Sarah Ruhl which recently opened at the Shaw Festival, those questions are part and parcel of the very entertaining Stage Kiss. Ms. Ruhl has twice been a finalist for the Pulitzer Prize. Her writing here is sharp, crisp, clean, and very funny, with warmth and intelligence thrown in for good measure.

She and He meet in New Haven at the first rehearsal of a moldy old play twenty years after the abrupt ending of their affair. She has no idea He has also been cast and is flummoxed when she sees him at the first rehearsal. She is anxious about acting again after a hiatus of ten years, having married and raised her teenaged daughter. His has been the life of the itinerant actor, living in a fleabag apartment in the East Village, and currently involved with a school teacher. The former lovers play former lovers in the overwrought production. Husband points out that, during the four-week run not counting rehearsals, the lovers have kissed two hundred and eighty-eight times. Whew! But it is the rehearsal kisses that ignite their passion and hurl them back to the heady days of their youthful liaison.

Fiona Byrne’s She is a bundle of nerves at her audition, talking incessantly, moving chairs an inch, asking Director if she can do this or that, and dropping things. Her ambivalence is tangible as she is increasingly drawn to her former lover. Ms. Byrne is a fine comic actor whose facial expressions and delivery are perfectly timed for maximum laughs, and who also expresses the warmth and maturity her character has developed over the years.

Jeff Meadows plays Kevin, Director’s assistant, understudy to He, and all around dogsbody. He is a riot. You will giggle just looking at him because he is always up to something, whether just gazing at the other actors during rehearsals, walking across the stage, or stepping in as understudy to He. How he goes about kissing the horrified She during rehearsals has the audience laughing out loud, as do his roles as a doctor and a pimp.

Neil Barclay as Director takes a laissez faire approach to his job, saying “try it” to anything an actor proposes. He is very charming and sweet when he speaks to the audience before the opening of his own play in the second act. He has it down as an enthusiastic and passionate writer of a perhaps not-very-high-quality play in which he casts She and He as a whore and an IRA soldier.

The cast is rounded out by several actors who play various roles. Rong Fu is hilarious as the betrayed teacher. Sarena Parmar plays daughters real and imagined. She is the overacting daughter in the play, and She’s daughter in real life, a profanity-spewing, angry and hurt teenager. Sanjay Talwar is Husband, a loving and forgiving man who goes the extra mile for his beloved She, in the play and in life.

The set, designed by Gillian Gallow, transforms from a backstage audition room to the stage set for the play in the first act, to He’s grubby apartment which becomes another stage set in the second act. The audition room has the feel of a much-used space, while one can almost smell He’s grungy apartment.

Direction is by Anita Rochon, who has assembled a fine diverse cast and creative team. She keeps up the comedic pace while allowing for tender moments to play out.

She asks He, “When I kissed you just now, did it feel like an actor kissing an actor or a person kissing a person? Because I’ve kissed you so many times over the last few weeks, I’m starting to not know the difference.” Husband declares when he counts the two hundred eighty-eight kisses: “It isn’t love. It’s oxytocin!”

Is it love between She and He, or have all those kisses just ignited their libidos and the desire to revise their shared past?

85 Queen Street Niagara-on-the-Lake, NY L0S 1J0
Two bitter exes are cast in the same play as passionate lovers. Will they strangle each other? Or seduce each other? And how can we tell if it’s real or make-believe? Heartfelt and hilarious, this…
- Share this page -