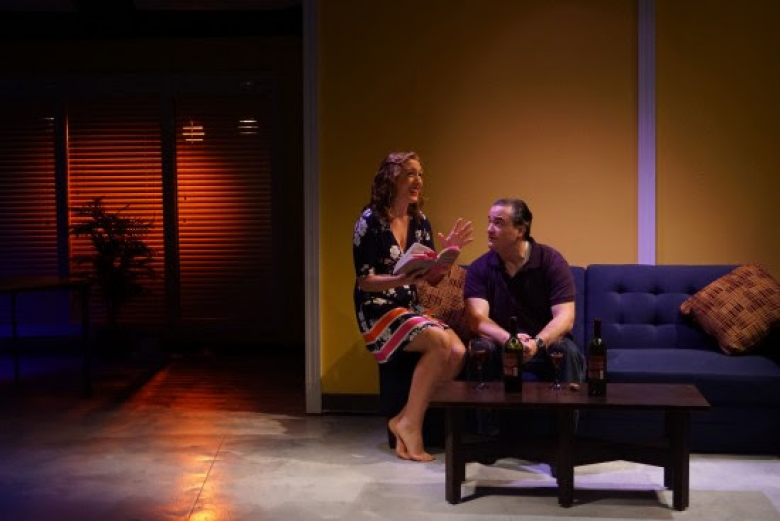 The opening production in Road Less Traveled Theatre’s beautiful new home at 456 Main Street is Speed-the-Plow. In a talk before the performance, Scott Behrend, Artistic and Executive Director of Road Less Traveled, was effusive in his thanks to those in the sold-out crowd who helped fund and supported the move, and to all the people who have supported the theater over the years. It was an exciting night for the theater and for the community.

Speed-the-Plow is David Mamet’s foray into the underbelly of the business aspect of Hollywood. Written in 1988, the play is extremely funny at times and deeply disturbing throughout, particularly in light of the recent Harvey Weinstein scandals.

Bobby Gould (Matt Witten) is just settling into his new job as Head of Production at a major studio when his longtime crony, Charlie Fox (Kevin Kennedy), not as successful and in dire need of a big score, arrives in a frenzied state to announce that he has secured a 24-hour commitment from the great movie star Doug Brown to produce a terrific prison buddy movie. It has everything, most importantly sadistic sex and violence, making it a sure winner. During their rapid-fire rhythmic bantering, cut-off sentences, stops and starts, staccato Mamet dialogue, Bobby laughs about a book he is courtesy-reading for his boss about radiation and the end of the world. It would never make a dime. Enter Karen (Laura Barriere), Bobby’s temp secretary. Not graced with a last name, because why would a sex object require a surname, Karen is a beauty and seems a bit naïve. So, of course, the men bet on whether Bobby can bed her. He gives her the radiation book to read, inviting her to his house that night to discuss it. She agrees. And then…

The cast is outstanding. Matt Witten is full-steam-ahead as Bobby, until he comes up against the possibility of regaining some part of what may, in the dim past, have been his humanity. His confusion as Karen talks of God and self in Scene 2 is charming. While the struggle of such a shallow being can hardly be called something as profound as a dark night of the soul, Mr. Witten reveals a desire in Bobby to regain some sense of purpose beyond his banal hedonism. It is as if he sees a light in the distance and the audience can feel him tentatively moving toward it. Later, Mr. Witten leaves us wondering if Bobby is as sure of his ultimate choice as he appears to be.

Kevin Kennedy’s desperation as Charlie is visceral. He will do anything to get his shot. Mr. Kennedy leaves no stone unturned in his driving need to be a player. He cajoles, attacks, wheedles, demands and begs without a modicum of shame.

The two men sold their souls many years ago to the great god Mammon, openly describing themselves as whores, while ironically riffing about not being in it for the money. They never falter in their rapid-fire exchanges, expertly playing off each other, bludgeoning each other with their insults and verbal outpourings, attempting to feel something, anything beyond what they know is their cupidity. At the same time, they are aware they are not fooling themselves. Very well done.

Making her debut at Road Less Traveled, Laura Barriere gives a finely nuanced performance as the surname-less Karen. Her early naïvete feels as real as her later transformation. When she talks to Bobby about the radiation book, her face lights up and her entire demeaner is compelling. Bobby becomes enthralled by her, and her confusion and anger when she is punished in Scene 3 speaks to the plight of women who seek the same kind of power so readily granted to men.

I admit to not being a great fan of David Mamet. His narcissism, misogyny, and unrelenting cynicism are off-putting to me. However, the man does have a way with words and is expert at slicing open the entrails of the greedy, driven and desperate who inhabit the offices of the powerful and would-be-powerful. And Director Scott Behrend has created a stellar production of this tight 85-minute word-play. There are no hindrances to the fast pace of the play, either by the actors or the production crew. The set by Dyan Burlingame has an open feel that allows the actors to move around freely, wheeling each other in the office chair and verbally sparring, while also creating a more intimate space for the scene between Bobby and Karen.

Speed-the-Plow at the brand new Road Less Traveled Theatre is a must-see for Mamet fans, and an evening of very fine theater for all theater aficionados.