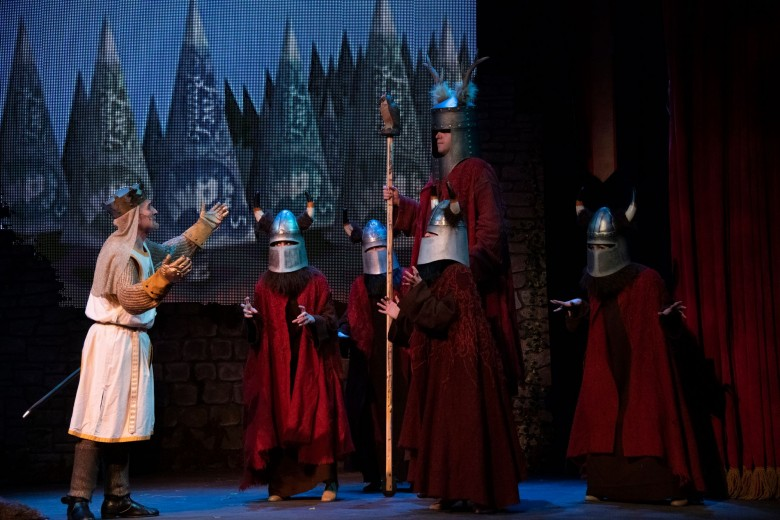 Spamalot, now at the Kavinoky Theatre, is about as much fun as one can have at the theater. There was so much laughter in the house opening night that it filled the entire room, then leaked out into the newly remodeled lobby, where volunteers reported that it made its way downstairs from the balcony and gradually filled the entire building. When the audience wasn’t laughing, they were smiling and trying to catch their breath before the next laugh. Spamalot is silly, witty, and goofier than, well, Goofy ever thought of being.

Director and Choreographer Lynne Kurdziel Formato has assembled a first-rate cast and crew to bring to the stage a fast-paced production that would make its creator proud. Eric Idle, he of Monty Python fame, wrote the book and lyrics based on the 1975 movie parody of the King Arthur legend, Monty Python and the Holy Grail. It follows a rather clueless King Arthur, first in search of brave knights for his round table, and then in search of the Holy Grail itself. Along the way, with his sidekick Patsy who keeps him on point, he encounters various unusual beings who either assist or hinder his quest, as he moves between the Middle Ages and the present, with a quick stop in Buffalo.

There is no weak link in the large cast who appear to be enjoying themselves immensely while being tasked with rapid dialogue, multiple characters, and for some, many costume changes. They sing, they dance (tap dancing included), they do pratfalls, ride imaginary horses, use several different accents, die only to come to life again, discover their true selves in grand style, and perform high kicks that would make the Rockettes take note.

Michele Marie Roberts plays The Lady of the Lake. She has an amazing voice and range that rocks the rafters, and impeccable comic timing. Louis Colaiacovo’s fearful Sir Robin lets it all go and is outstanding in the “You Won’t Succeed on Broadway” number. Greg Gjurich and Arin Dandes team up as Arthur and Patsy. She is delightful in her loyalty and frustrated in her love for her master, while he projects just the right amount of fervor and obliviousness. Dudney Joseph has a funny turn as the socialist Dennis who becomes Sir Galahad and sings the parody duet “The Song That Goes Like This” with The Lady of the Lake. Doug Weyand is a hoot in a small role as his mother. Steve Copps is very busy as the dense Lancelot, French Taunter, Head Knight of NI, and Tim the Enchanter. Dan Urtz is just hilarious whether he is miming, dancing the can-can or not dropping dead.

The dancers are very professional, well up to the choreographic mark set by Ms. Kurdziel Formato, and light up the stage as “Laker Girls” cheerleaders, Las Vegas showgirls wearing roulette wheel costumes with red turbans, water maidens, and…and... They are terrific.

The splendid costumes are by DC Theatrics. They range from raggedy peasant-wear to glittery showgirl and Vegas outfits to the graceful watery maiden costumes in the song “Come With Me.” Wigs by Mary McMahon complement the costumes and add humor of their own.

Musical Direction is by Allan Paglia whose musicians never overwhelm the singers but add depth and sometimes humor to the proceedings. Sound Design is by Geoffrey Tocin. There was some trouble with Patsy’s mike in her duet with Arthur, “Always Look On The Bright Side Of Life,” in the opening of Act II that kept her voice from reaching out into the audience. That was the only hiccup I noticed in the show. If there were more, I missed them because I was laughing so hard. Set Design by David King, with two-story stone walls on either side of the stage, provided a castle fortress-like feel. The video screen with LED images by Brian Milbrand was used as backdrop to the scenes on stage, including lakes, mountains, casinos, a barefoot toe tapping God, and a monster, among other images. Lighting Design is by Brian Cavanagh who keeps the stage brightly lit for the most part, better to see the goings-on that all seem to be happening all at once.

Spamalot at the Kavinoky is a great boost if you are feeling let down following all the glitter of the holidays or are depressed just by the news of the day. The book and lyrics are funny and then beyond funny into the absurdly hilarious. It is expertly directed and choreographed, with costumes, wigs, and technical elements all contributing to the excellence of the production, and the actors are very sharp in their roles. Kudos to all.

Spam and a bunny make an appearance or two, along with a big baby not to be named here. You can see all this and more in Spamalot at the Kavinoky Theatre until February 3rd.