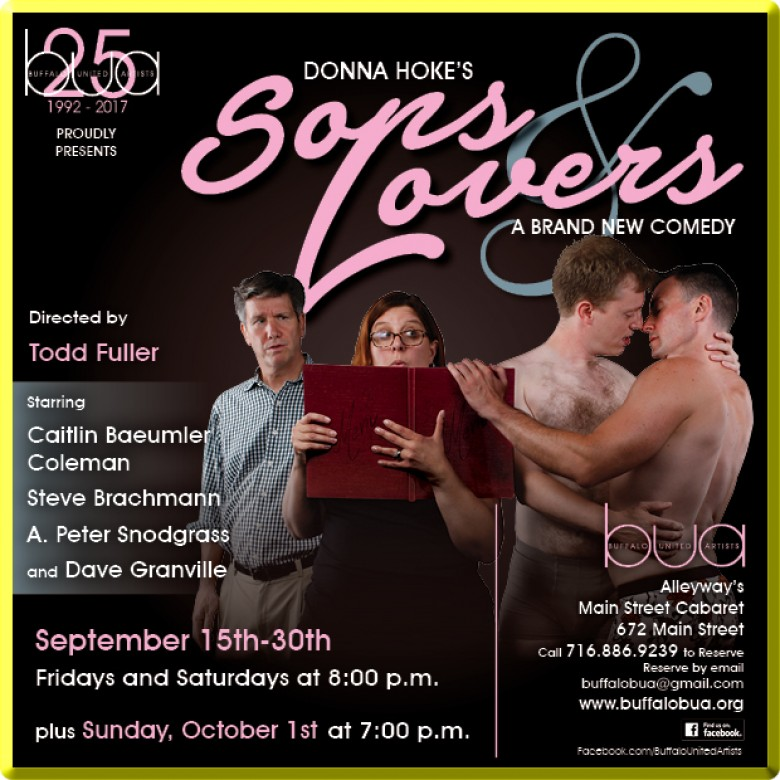 Sons & Lovers is a new comedy by Donna Hoke about coming out of closets – the ones that LGBTQ folks have been in, and also the oh-my-god-I’m-50-and-look-at-my-life closet.

Bill is 24 and everyone he knows knows he is gay-except his mother, Ellen. Whenever he even comes close to telling her, she flutters and fusses and changes the subject, or insists that the person with whom he is currently sharing a bed is a woman who will produce grandchildren in the very near future. They both tie themselves in knots to avoid the truth. She goes to great, sometimes hilarious, sometimes ludicrous, lengths to maintain the fiction that her son is straight. For his part, Bill “enables” this fiction, even at the risk of losing his lover, Marq.

Ellen is turning 50 and having the mid-life crisis from hell, as she bakes cookies for her husband who will be returning from a work stint in Paris. That Ellen chooses to bake cookies for this occasion, as a mother might do for her 5th grader returning from his first day back in school, tells us a great deal about her and her marriage.

As the eight scenes unfold in this ninety-minute production by Buffalo United Artists, Ellen and Bill struggle to come to terms with who they really are, and what they want for themselves in life. In scene seven, Ellen says “I let myself go.” In addition to the conventional meaning, this also can be interpreted as “I let my ‘self’ go,” i.e., I have compromised over the years to the point that I don’t even recognize myself. While this all sounds very serious, it is done in comedic tones that are often very funny.

Ms. Hoke has a keen ear for sharp, funny dialogue that conveys a message. We are treated to double entendres and sexual innuendos, plays on words, and some delightful exchanges between the characters. Ellen’s denial that her son is gay is central to the story. However, while it is amusing that she goes to such great lengths to deny the obvious, she is at times more of a caricature than a woman. As Marq says, "People are coming out in junior high school now, so what is the big deal?" That question is never satisfactorily answered.

Caitlin Baeumler Coleman plays Ellen. She is frightened and funny and full of angst about her life. She becomes frantic as she desperately searches for words that will keep up the fiction that Billy’s lover is a woman, and that she really hasn’t compromised herself into someone she doesn’t recognize. She does well as she comes to terms with who Bill is and who she is, although her neediness is grating at times. But, then, neediness is always grating.

Dave Granville is the fourth member of the cast, playing Ellen’s husband, Butch, as well as two other roles. Mr. Snodgrass also has two smaller roles.

Todd Fuller directs. The stage is very small in Alleyway’s Main Street Cabaret, but Mr. Fuller moves his cast about with ease. I was a bit confused for a few minutes in scene six as to what was going on when Ellen and Bill were doing laundry, but as the scene unfolded, it became clear. In scene four, Bill went out for iced tea and left Marq and Ellen to talk. He came back with water, or perhaps it was gin or vodka. Whatever it was, it wasn’t tea, and was a distraction.

Sons & Lovers is a funny play, if uneven, about people, both young and middle-aged, who are struggling to find their place in the world. As the play shifts in scene six and Bill and Ellen are confronted with a reality neither of them want to face, each must find their own truth. Ellen says, “No one should have to pretend,” and don’t we all wish that were true?
Sons & Lovers  by Buffalo United Artists is at Alleyway’s Main Street Cabaret until September 30th.

1 Curtain Up Alley Buffalo, NY 14202
As long as Ellen doesn’t openly acknowledge that husband Butch is a cheater or son Bill is gay, they’re just... not. As long as Bill doesn’t introduce Marq to his mother, he can avoid…
- Share this page -