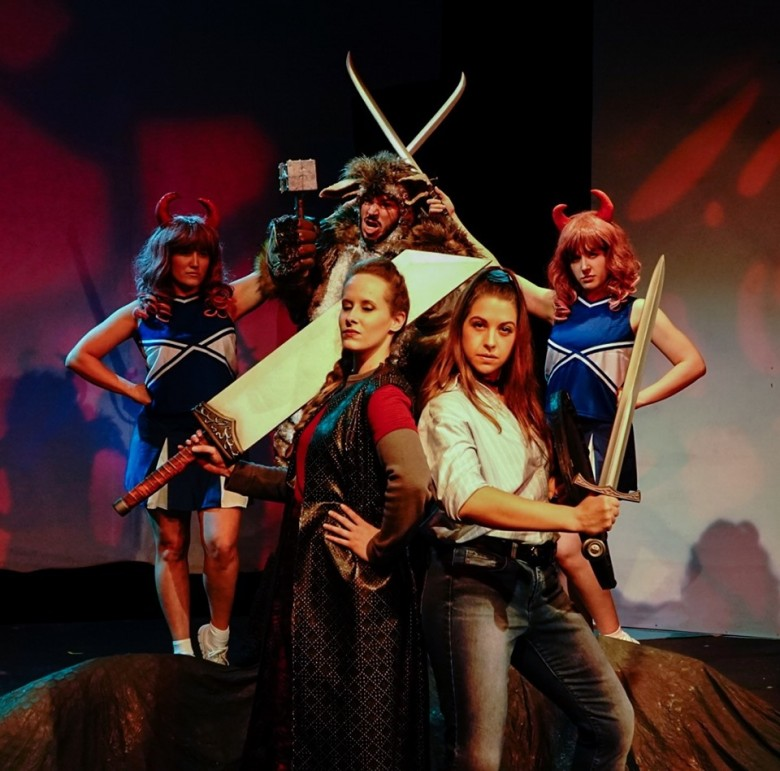 Playwright Qui Nguyen is an OBIE award-winning co-founder of Vampire Cowboys of NYC, a pioneer of “geek theatre.” They are “dedicated to creating shows for the pop culture nerd in us all…committed to putting heroes on stage…” Using his signature pop culture lingo, puppetry and stage violence, She Kills Monsters is a rollicking good time in Subversive Theatre’s fine production and is so infectious that it truly does speak to the nerd in us all, while carrying a message about love, loss and the pain of exclusion.

High school, that minefield of raging hormones and brains not fully developed, filled with people who are obsessed about fitting in and being like everyone else while at the same time being obsessed with being unique; that place where being different, i.e., a geek, nerd or heaven forefend, on the LGBTQ spectrum, is tantamount to exile, is the setting for She Kills Monsters.

Agnes (Emily Yancey) is a teacher, an average young woman with an average life who longs for a life that “isn’t so boring.” That wish is fulfilled when her entire family is killed in a car accident that includes her younger sister, Tilly (Jamie Nablo), a 16-year-old who has always been, well, different. Agnes never took the time to get to know Tilly. While going through her sister's belongings, she finds a notebook filled with weird names and magical adventures she does not understand. She takes it to a student, Chuck, (David Moran). He is a Dungeon Master in the game Dungeons and Dragons, and after some reluctance on his part, he teaches Agnes how to play the D&D game that her sister created. Agnes hopes that by playing it out she will learn more about Tilly and get to know her in a way she never did while Tilly was alive. She learns a great deal about herself along the way.

All the actors are very fine. Dual roles abound and each character is well defined. Emily Yancey plays the average Agnes to a T, with little in the way of imagination and a great deal of skepticism about D&D, initially—until she learns to embrace her inner badass. Jamie Nablo is excellent as the troubled Tilly, her pain as an outcast weirdo at school sublimated into the heroic Paladin of her D&D game. David Moran is a perfect nerdy guy who is also witty with a kind of impish charm. Ryan Kaminski plays Agnes’s average boyfriend very well. Sofia Matlasz is excellent as the Demon Queen Lilith and teenage Lily, as is Stefanie Warnick as Kaliope, the Dark Elf, and Kelly, Tilly’s friend. Mara Westerling-Morris is a riot as the alcoholic, foul-mouthed guidance counselor Vera. Jaimee Harmon is mysterious as the Narrator and a hoot with Westerling-Morris as the evil succubi cheerleaders. Rick Lattimer is ditto as the slacker Overlord of the Underworld. And Bekki Sliwa as the nerdy, yet perceptive Stevie and the oft-killed Steve is very funny, too.

All the theatrical elements come together in this production, courtesy of Director Drew McCabe. He has assembled a very talented creative team. D&D costumes by Brenna Prather have a Medieval-that-sometimes-meets-S&M feel that works very well. Fight Captain Stefanie Warnick and Fight Choreographer Jessica Stuber have fine-tuned the fight scenes. They are fun to watch, and all the actors skillfully perform them. The paintings of Merlin and a sexy witch that frame the stage are by Adam Smith. The puppets for the five-headed dragon created by Michele Costa are gorgeous. Gail Argetsinger and Drew McCabe contributed several more monsters that are scary and silly at the same time. Set, sound, and lighting design are by John Kennedy, Alley Griffin and Drew McCabe, and Kurt Schneiderman in that order.

She Kills Monsters is 90 minutes of very witty pop culture humor and teenage angst, of heroes and magic, while speaking directly to the pain of being bullied and outcast, as well as to the grief and loss experienced by the sudden death of loved ones. Subversive Theatre’s production is a delight on every level and a terrific Halloween, going into the darkness of winter, evening of theater. Plus, you will learn who Gary Gygax is, if you do not already know.

She Kills Monsters is at Subversive Theatre through November 16th.