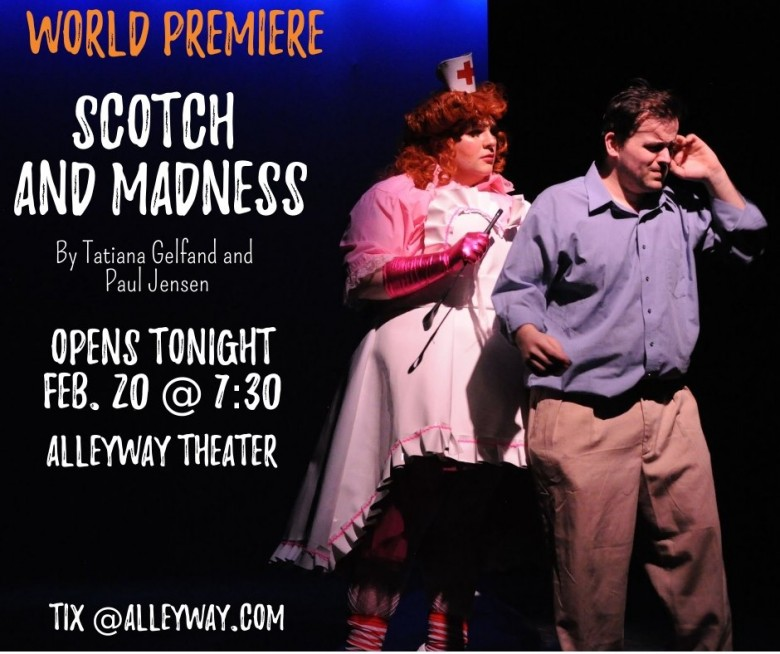 A bottle of scotch, a childhood trauma, and listening to the suffering of others as the intake counselor for Psychological Counseling Services on Christmas Eve is the powerful brew that catapults almost middle-aged Fred into an alcohol-infused, surrealistic, hallucinatory nightmare in the world premiere of Scotch and Madness.

Directed by co-playwright (with Paul Jensen) Tatiana Gelfand, the play explores the tortured mind of a man who is competent and good at his job, if rather annoyed at being the one stuck working the phones on Christmas Eve, listening to the sad stories of lonely and discontented people. The bottle of scotch that Fred can’t resist, a conversation with an unhappy photographer he finds attractive, and a phone call from his uncle send Fred into the darker reaches of his mind where he reimagines the defining, horrific moment of his childhood. Sometimes hilarious, sometimes heartbreaking, the play occasionally misses the mark or stretches things out too long, as with Fred’s displays of angst and the group therapy sessions, or when the dialogue becomes repetitive, as with Alicia’s angry outbursts.

As the central character, Timothy Goehrig has a lot of work to do as Fred, and he does it very well as he gradually descends into an alcoholic hell peopled with figures from his past mixed in with the attractive woman on the phone and a rather unusual group therapist. His confusion about what is happening to him and grief over his mother’s death become more and more terrifying to him as the play unfolds and he is faced with his past. He has lengthy monologues that he carries off with nary a hitch.

Kathleen Rooney is excellent as the psychotic crone Lucy/Lucille. Her madness has a sweetness about it, as when she tells Fred coyly that she keeps her large scissors in her pocket where "the holy spirits tell me what to do.” Her stream-of-consciousness monologues are quite delightful. She has a bird-like manner as she watches what others are up to, and one wonders if she is taking in more than she seems to be.

Jamie Nablo does a fine job as Anna, the discontented photographer who Fred dreams about. Jaimee Harmon is very good in several roles, particularly as Fred’s corporate lawyer sister, Laura. Rounding out the cast are Betsy Bittar as the angry alcoholic Alicia/Alice, James Cichocki and Daniel Greer in several roles, and seventh-grader Eddie Bratek as Petie.

Sets, costumes and properties are by Todd Warfield. Fred’s cubicle, stage right, looks like a workstation in a low budget non-profit organization, with an ancient computer and tacky Christmas decorations, while Alicia’s kitchen, stage left, screams “trailer trash.” The director often places characters on the opposite sides of the stage, as when Fred is talking to the hard-drinking Alicia, which makes it difficult to watch reactions as one character speaks and the other listens.

Stage combat is by Stefanie Warnick, with lights and sound by Neal Radice.

Scotch and Madness is an entertaining foray into one ordinary man’s complex and tormented mind. And doesn’t that make you wonder what’s going on in the mind of the person sitting next to you in the theater or at the next table in the restaurant? Of course, your own mind contains only joy and happy memories. Of course. Just so.

Scotch and Madness is at Alleyway Theatre through March 14th.

1 Curtain Up Alley Buffalo, NY 14202
The holidays can be a difficult time at Psychological Counseling Services, especially for the overnight crew. This Christmas, Fred’s going to receive so much more insight than he’ll give.…
- Share this page -